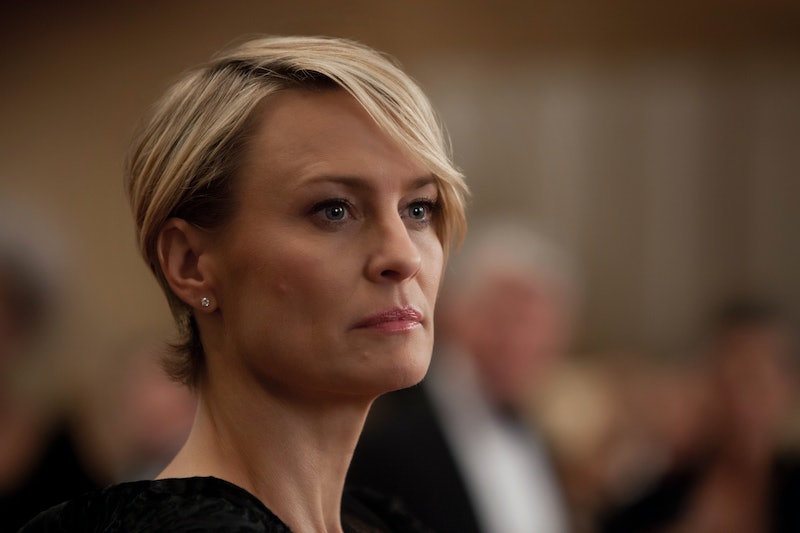 Warning: Major House of Cards Season 2 spoilers abound from this point on. With Chapter 14 of House of Cards ripping our breath straight out of our chests, it's almost masochistic to embark onto the second episode of Season 2 so soon after finishing the first. But alas, our addiction betrays us and we soldier on right into a storyline about a victim of rape.

Chapter 15 doesn't deliver nearly the gut punch that we felt upon losing Zoe Barnes (Kate Mara) in the Season 2 premiere, but its method of bringing up the rape discussion certainly isn't exactly a jog in Claire's favorite D.C. park. At a dinner honoring two Marine generals, including General Dalton McGinnis, Claire (Robin Wright) stiffens when McGinnis greets her and newly sworn-in Vice President Frank Underwood at their table. Earlier in the episode, she bristles at the mention of his name and simply tells her assistant that she went to college with him. But something is amiss.

At dinner, she leaves the table abruptly, "failing" to support Frank in his first appearance as Vice President, and he knows something terrible is bothering her in order to make her shirk the opportunity to present herself as one half of their powerful team. She admits that McGinnis is the man who raped her in college — yet, the general had the audacity to smile at her and say "Claire and I dated in college. Well, we dated for five minutes." Looking back on those words, they hold such fire, such audacious cruelty. Those "five minutes" weren't a figurative measure of speech to describe a brief affair, they are the five minutes that changed Claire's life forever.

Frank is naturally hot-headed when he hears the news — he's about to pin a medal on this man's lapel knowing full well that he's the villain of his wife's youth. He's so furious you'd think he's about to grab the general and push him in front of a train just like he did Zoe, but Claire holds strong: she's not willing to let the man who ruined much of her youth ruin what she and Frank have worked so hard for and Frank letting his anger come out in this setting would ruin everything. McGinnis may have stolen control once, but he doesn't get to control who Claire's become — his power is no more.

Claire shakes it off and even manages to clap when Frank pins the star on McGinnis — though she's likely clapping in support of Frank's ability to keep calm knowing full well that the man he's "honoring" is a rapist. After Frank's outburst, the topic is approached rather tepidly, but the series still doesn't tip-toe around it. Instead, it focuses on Claire's ability to process what happened to her and to become a strong, powerful person afterward rather than her victim-hood.

She doesn't crumble at the sight of the man who temporarily stole her power — though she does quiver. She hasn't forgotten what happened to her or blocked it from her mind, but she also hasn't taken her attacker down. Instead, her revenge is that she's built a life of power and influence — however ruthless that life may be — and she's unwilling to let this man keep her from realizing her goals. Her silence isn't weakness, it's strength.

When Claire later speaks in detail about the rape, she's at home with Frank and she refers to her younger self in the third person.

You think I don't want to smash things? I know what that anger is more than you can imagine. When he was on top of me ... When he was on top of me, I pressed my hand. With everything I could I pressed it into his face. I pressed it so hard I broke his nose. That didn't stop him. He shoved the sheets in my mouth. I could barely breathe. Every time I think of her pinned down like that, I strangle her, Francis. So she doesn't strangle me. I have to. We have to. The alternative is -- it's unlivable.

Claire's speech, without any of the graphic violence we recently saw on Downton Abbey when Anna was raped by a visiting valet, explicitly deals with the weight that every victim of sexual assault and rape carries with them. Rather than focusing on the salacious, violent visual aimed to shock audiences into a gasp, we find Claire lying on her side in her own bed. It's years after the rape; she wears no make up or her usual structured dress as armor. She's simply open to us and she bares her soul in simple English.

But between the lines, we find the pain she feels in "strangling" her former self. In silencing the woman who was hurt by a ruthless young man, she's filled with anger and it's that anger she uses to fuel her. There's certainly no "right" way to handle the pain and grief that sexual assault begets, so it's not for us to say that Claire is a good example or bad example of how to handle it, but what we can commend is the series itself.

Rather than cowering to television audiences' desire for grim details and visuals of sexual assault, House of Cards offered up a narrative that delivers the only part of a rape that matters: the pain and the emotional scars such an incident leaves on a victim. In this way, Claire's power is her own. Claire's memory is her own. Her rapist is not the master of her story, she is.

If a series is going to tackle this topic, House of Cards' Chapter 15 is certainly an example of how to do it well.

More like this
Nicola Coughlan Shared A Lady Whistledown Excerpt From ‘Bridgerton’ Season 3
By Grace Wehniainen, Alyssa Lapid and Sam Ramsden
UK Viewers Will Have To Wait To Watch The Handmaid’s Tale S5
By Maxine Harrison
Twitter Is Pouring Out Some Zhampagne As ‘Schitt’s Creek’ Leaves Netflix
By Brad Witter
Jeffrey Dahmer’s Arresting Officer John Balcerzak Got His Job Back After Being Fired
By Grace Wehniainen
Get Even More From Bustle — Sign Up For The Newsletter