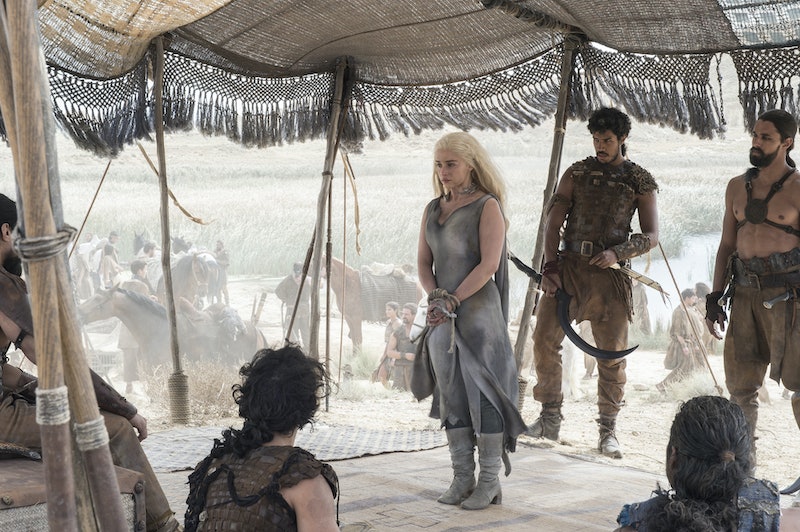 Until recently, Daenerys Targaryen had perhaps the longest unbroken winning streak of any character in Game Of Thrones history. In only four seasons, she went from a powerless, exiled princess sold like cattle by her brother in exchange for an army to the Mother of Dragons and Breaker of Chains, commander of 8,000 Unsullied and Queen of Meereen. So naturally, her luck was bound to turn sometime. The Season 4 finale saw what could be qualified as her first true defeat, when she was forced to chain up her dragons after one of them ate a young girl. Then practically all of Season 5 was a struggle against the Sons of the Harpy, resulting in Dany's triumphant flight from Meereen… and subsequent capture by an entire khalasar. But what does the Dothraki army want from Dany, exactly?

The answer to that question lies at the heart of the politics and traditions of the Essosian horse lords. Every culture on the eastern continent is different, and every single one of them is vastly different from the medieval, anglo-saxon culture of Westeros. One thing is clear: the Dothraki don't want Dany dead, since we've seen her being held captive by them in the Game Of Thrones Season 6 trailers. If Dany had been discovered by a troop of Lannister soldiers, they probably wouldn't have hesitated to kill her on the spot; so where are the Dothraki taking her and what do they have in store for her?

Thankfully, we know the answer to the first half of that question, thanks to this GoT Season 6 clip released by HBO in advance of this Sunday's premiere. Those viewers who can still remember Season 1 in detail might recognize those giant horse statues as the entrance to Vaes Dothrak, the only city built by the nomadic Dothraki peoples, which Dany first visited shortly after her marriage to Khal Drogo. It is forbidden to carry weapons or shed blood within Vaes Dothrak, and it's the only place the many warring khalasars can convene in peace.

You can breathe a sigh of relief now: the fact that blood cannot be spilled while in the city means that Dany is not in any immediate mortal danger. (Although, to play devil's advocate, that didn't stop Drogo from finding a clever way to kill Viserys.) But neither does this necessarily mean that Vaes Dothrak is a safe place for her. The city is also the home of a group of women called the dosh khaleen who serve as religious leaders and interpreters of omens; they're the ones who instructed Daenerys to eat a horse's heart back in Season 1 and, when she succeeded, declared that her unborn child would be the Stallion Who Mounts The World.

One more thing about the dosh khaleen: they're all former khaleesis. Dothraki customs dictate that, when a khal dies, his wife is taken to Vaes Dothrak and is forced to serve as a dosh khaleen for the rest of her life, until she's an old withered crone. The show didn't touch on this as much as George R.R. Martin did in his novel, but Dany's greatest fear once Khal Drogo succumbs to his wound is that her khalasar will carry her off to serve as a dosh khaleen. And now her worst fear is coming true.

So, on the one hand: she's not dead. That's good. On the other hand, she's essentially being pressed into indentured servitude for the rest of her life. That's not great. Thankfully, Daenerys still has one dragon on the loose that will hopefully be able to terrify the Dothraki into once again viewing Dany as a queen to be worshipped rather than a widow to be discarded. If only she could learn how to actually control Drogon rather than having him just appear and disappear on a whim. Now that might just be Daenerys' biggest challenge yet — literally.