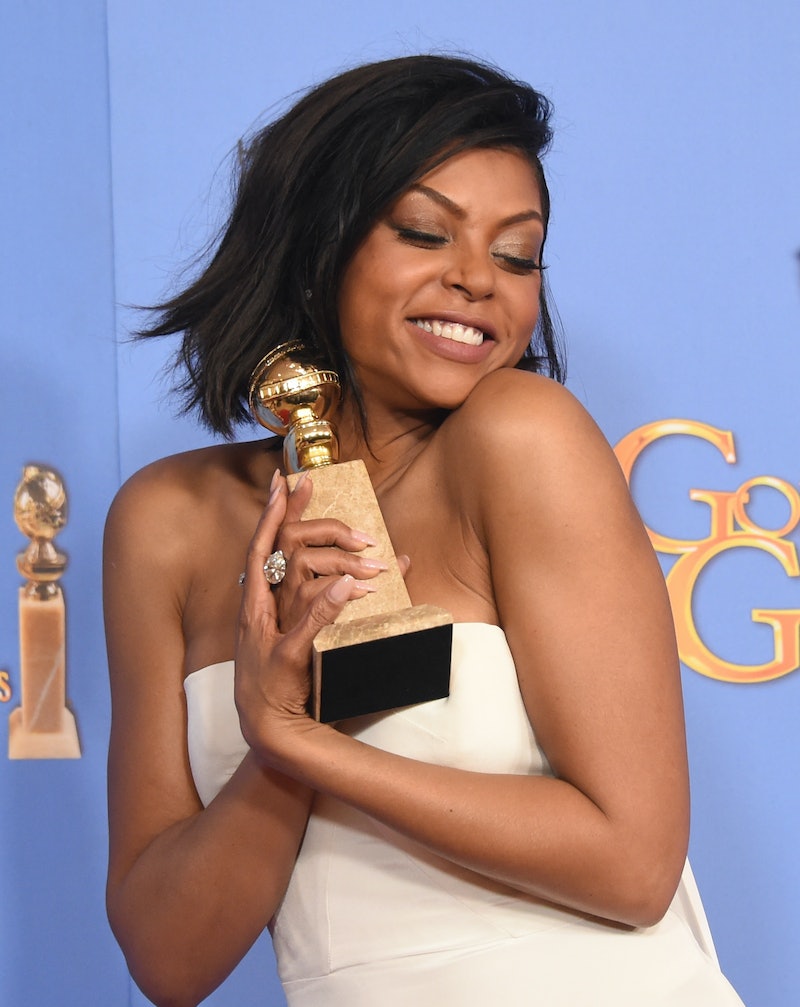 On Thursday morning, the highly-anticipated TIME 100 Most Influential People list was released, and among that hundred people was one name I wasn't expecting to see but wasn't surprised to read: Taraji P. Henson. As the star of Cookie on Empire, the actor has been catapulted to all new levels of fame that make it absolutely fitting that Henson would make the TIME 100. But it was in her profile, written by director Lee Daniels, that something truly eyebrow raising happened. Specifically, Daniels said, "Taraji is the modern-day Bette Davis, touching audiences with her honesty and intensity." And the reason my eyebrows are becoming one with my hair is because, though the comparison is not one that I would have made before, it's one that I consider to be 100 percent on the nose.

My love for Bette Davis wasn't bourn from her talent as an actor. Instead, I fell in love with her on the basis of one simple anecdotal story. Or, rather, one simple anecdotal quote : "I'm the nicest godd*mn dame that ever lived." A simple stroll through any of Davis' other well-known quotes, both accurate and attributed, would paint a more complicated picture of her. Was she nice? Frequently not. After all, she's also allegedly quoted as saying the best time she had with occasional co-star Joan Rivers was when she "pushed her down the stairs in Whatever Happened to Baby Jane?" Davis was complicated. She was the first female president of the Academy of Motion Picture Arts and Sciences, she was married four times and divorced three, and she was such a perfectionist that she fought with co-stars and executives alike. She was a whirlwind of a woman whose style and talent have, over the years, been praised, criticized, parodied, and imitated.

On the other hand, Henson is an actor who also needs no introduction. She has embodied Cookie Lyon so completely that many have trouble separating the character from the actor and, to be honest, they do have a lot in common. They are both loyal, they are forthright, they are honest, and they are powerhouses that are impossible to ignore once they're on your radar. Playing Cookie gave Henson a notoriety that she has always deserved throughout her career because, as Daniels rightfully pointed out, "[Henson] was underappreciated by white America and Hollywood, while African Americans heralded her as our Meryl Streep." From Hustle & Flow — or, hell, from even as far back as her very first role as Mo'Nique in Smart Guy — people have been sitting up and paying attention to this woman who refuses to be ignored.

And as her platform gets higher and her influence gets wider, what does Henson use it for? To support her co-stars and her friends. To support other actresses and women, especially black women, in Hollywood. To be ballsy and honest and hilarious enough to stand on a Golden Globes stage and declare, "Who knew that playing an ex convict would take me all around the globe. It just goes to show, I thought it would be Queenie, Will, my character from Karate Kid. But it's Cookie, who spent 17 years in jail for selling crack. So the world loves real." And there is where Davis and Henson interaction — they were both real. They were both themselves in a world where people tell women that they have to be one way, and that way was a mould they did not fill into.

Just as Davis once said in The Lonely Life, "I am doomed to an eternity of compulsive work. No set goal achieved satisfies. Success only breeds a new goal. The golden apple devoured has seeds," so too does Henson today say in Collider, "I’m always interested in challenging myself and pushing and seeing how far I can go. I don’t ever want to feel complacent. I don’t ever want to get boxed in." As for how Henson herself feels about the comparison, well, we know she'd be flattered. After all, it's one she's heard before and one she embraces. She told Harper's Bazaar in 2015: "I always studied Bette Davis. When I did my first film, Baby Boy, [director] John Singleton's mother called me 'Bette Davis Eyes.' So I bought Bette's entire collection. She can say so much with her eyes. It all bubbles under the surface. The best actors I've worked with in life said, 'If you're going to steal, steal from the best.'"

Just like Bette Davis left a legacy behind her and a trail of gossip around her in life and in death, so too will Henson become one of the most timeless and defining voices of our generation. America is finally giving her that shot, the TIME 100 is reinforcing it, and I believe that Henson is going to take it and run with it to even bigger and better heights. After all, it's what she's good at it.