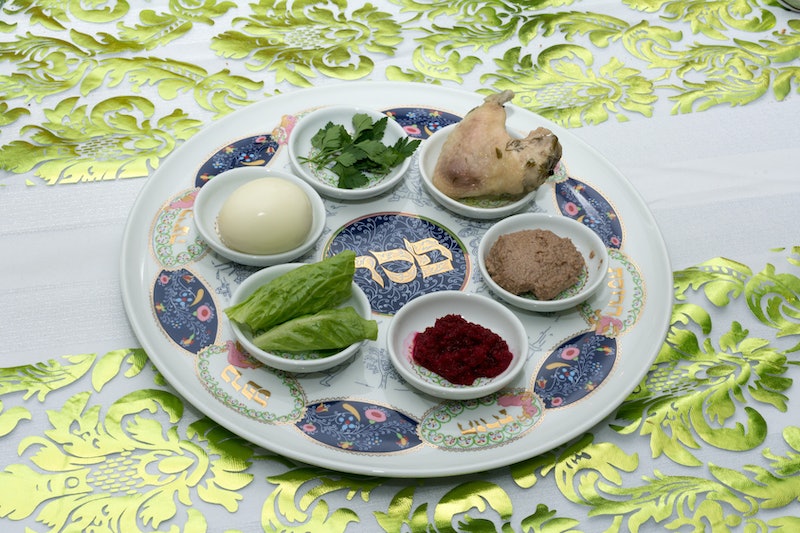 This Friday is the first night of Passover. It is also Earth Day. The holidays are natural allies, because at their core, they both aim to promote freedom. In Passover's case, that freedom is celebrated by remembering the Jewish people's exodus as slaves from Egypt. In Earth Day's case, we remember that the Earth should be free from humanity's many assaults on it.

According to the story of Passover, when God wanted Pharaoh to let his people go, he unleashed a series of environmental plagues: water poisoned with blood; pestilence; livestock running rampant; hail; death of the firstborn, just to name a few. Today, we have Flint, Michigan; widespread e-coli outbreaks; bees going extinct; extreme weather caused by climate change; a child dying of starvation every 10 seconds. If you believe in the story of Passover, perhaps it's time to consider whether we are being told to let someone else go.

According to the organization Compassion In World Farming, an estimated 70 billion farmed animals are currently being reared for food globally. There are only seven billion people on earth. So many animals are bred in order to keep up with our surging global appetite: more than one million chickens are killed each hour in the U.S. alone, and emissions from agriculture are only projected to increase 80 percent by 2050 as meat consumption and the human population continues to rise.

Livestock or livestock feed now occupies around 30 percent of the earth’s entire land surface, and one to two acres of rainforest are being cleared every second to make room for them. Depending on which measurements you go by, anywhere between 14 percent and 51 percent of global greenhouse-gas emissions are caused by animal agriculture. The livestock business is among the most damaging sectors to the earth’s increasingly scarce water resources, with just one hamburger taking two months worth of showering to produce. The list of facts about all the ways the animal agriculture industry is destroying the planet in order to feed our appetites could literally go on and on.

If you believe in the story of Passover, perhaps it's time to consider whether we are being told to let someone else go.

As Jewish Noble Prizewinner Issac Bashevis Singer wrote in Enemies, A Love Story, "in their behavior towards creatures, all men were Nazis. The smugness with which man could do with other species as he pleased exemplified the most extreme racist theories, the principle that might is right.” It is the same logic that makes humans think we are also entitled to make the planet's environment inhospitable for future generations.

We can tell ourselves that animals are "just different," or that they don't realize they are being enslaved. It is the same logic that has been used to enslave every being in history.

Imagine this scenario: from the moment you're born, you're a slave. You're locked up, and put on fertility hormones, and kept pregnant and nursing for the entire duration of your short, painful life. Each time you have a baby, it is taken from you. If he's a boy, he's killed. If she's a girl, she meets the same fate as you. Though you mourn and cry for your children every time, they are never returned.

This is the fate of all dairy cows — even the organic ones, or the "free-pasture" ones. Those dairy cows who are allowed out to graze have even been known, much like Moses' mother, to attempt to hide their babies from those who want to kill them.

"I think that Passover is a time to consider liberation from suffering. And I think it behooves all Jews, not only vegetarians and vegans and animal welfare activists, but those who care about Jewish values, to raise a voice of consciousness for the suffering of animals today and do their part and try to bring more compassion into the world," Jeffrey Cohan, executive director of Jewish Veg, told Moment. “That makes it particularly ironic to consume animal products on Passover, which are created through exploitation and enslavement and treated very cruelly, even in a kosher context.”

Perhaps, you argue, that eating animals is tradition, the way things have always been. “People often say that humans have always eaten animals, as if this is a justification for continuing the practice," Singer said. "According to this logic, we should not try to prevent people from murdering other people, since this has also been done since the earliest of times.”

Yes, a shank bone is "supposed" to be on the seder plate, but conservative and reform Jews have always helped the Jewish religion evolve with the times. Progressive seders I attended as a child featured an orange on the seder plate as a feminist statement, debates over whether a child asking a question could be inherently "wicked," and even discussions about helping Darfur. Yet animals, as far as I can recall, were never mentioned; only eaten.

Perhaps eating animals on Passover is another tradition that we progressive Jews also need to reconsider. Certainly, if you have a vegan or vegetarian at your Seder, know that they are not trying to be difficult, or scoff at tradition; they are actually honoring it in one of the best ways they can. Because here's the hopeful news: If you eat vegan even for just one day a week, your environmental impact is greater than if you ate as an omnivore completely locally seven days a week. And if every American skipped one meal of chicken per week and substituted vegetarian foods instead, the carbon dioxide savings would be equivalent to taking more than half a million cars off of our roads; we'd also save 100 billion gallons of water, 1.5 billion pounds of crops otherwise fed to livestock, and 70 million gallons of gas. Why not start on a day that celebrates freedom? We could put it off, but that's how Pharaoh tried to play it, too.

As Singer said, “To be a vegetarian is to disagree — to disagree with the course of things today ... starvation, cruelty — we must make a statement against these things. Vegetarianism is my statement. And I think it's a strong one.”

More like this
35 Genius Secret Santa Gifts For Someone You Don’t Know Very Well
By Rebecca Deczynski and Lauren Grant
35 Holiday Trivia Facts That Will Impress Your Guests This Year
By Lauren Grant and Emma Carey
44 Impressive Secret Santa Gifts That Won't Break The Bank
By Sadie Trombetta and Lauren Grant
The Correct Way To Start An Advent Calendar, Explained
By Kaitlyn Wylde and Jay Polish
Get Even More From Bustle — Sign Up For The Newsletter