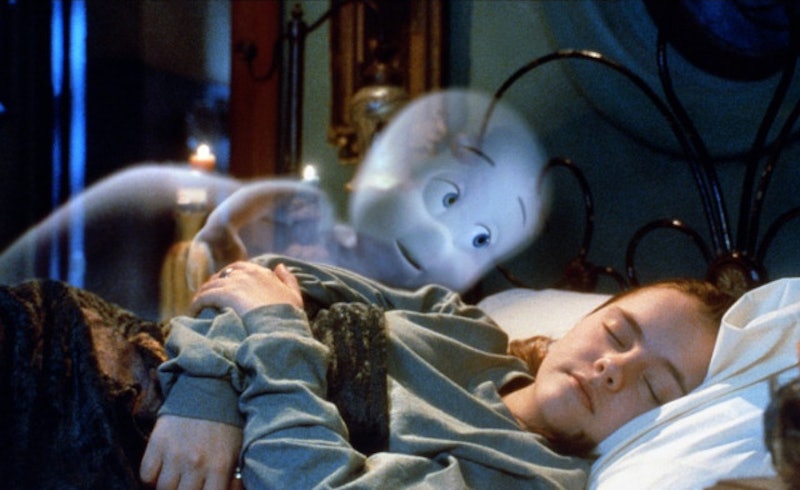 I'm not ashamed to say that the movies of the '90s produced many, if not all of, my first celebrity crushes. I'm also not ashamed to say that I can't trust anyone who wasn't a little in love with Jonathan Taylor Thomas back in the day. I am, however, a little bit ashamed at some of the characters from '90s movies that I was in love with. Look, we all have them — crushes we developed that we now regret — but there's something about those '90s films that really brings that embarrassment home.

Let's face it: it wasn't weird to be in love with Leonardo DiCaprio after Titanic . In fact, it was probably more embarrassing not to be. But, what about Billy Zane, the non-iceberg Titanic villain? Or that massive crush on Simba, you know the animated lion from The Lion King? (It's not that weird, I swear!) Some crushes were embarrassing from day one, while others make you shudder upon reflection (Sebastian from Cruel Intentions was a grade A jerk, people). Regardless of how or when you were embarrassed, these 17 male '90s characters you were in love with certainly aren't ones you likely brag about today.

Sure, he was voiced by JTT and Matthew Broderick, but Simba was an animated character, and a freakin' animal. Not exactly what you think of when you think of childhood crush... and yet.

OK, so it's not exactly embarrassing to have a crush on Josh Hartnett, but his character in The Virgin Suicides is basically evil. And that makes justifying a crush a heck of a lot harder.

Yes, OK, yes, I like Ben Affleck in this movie more than Matt Damon. There, I said it.

Are there any four words a woman wants to hear less than "Show me the money"? Loud, cocky and over-the-top, Rod Tidwell (Cuba Gooding Jr.) was almost unbearable. Almost.

Austin Powers may have been a ridiculous character, and not a very attractive one at that. But still, you can't deny that his goofy charm didn't at least make you daydream a little bit.

Yes, that is Foggy Nelson from Daredevil. But, before he was Foggy, Elden Henson played Lanney Boggs' BFF, Jessie Jackson in She's All That. Maybe not as hot stuff as Freddie Prinze Jr. at the time, but, man, oh so cute.

So many adorable, if not slightly disturbing, young men in American Pie, and while people mostly stuck with crushes on Jim (Jason Biggs), Oz (Chris Klein), or Kevin (Thomas Ian Nicholas), some of us were lusting after Paul Finch (Eddie Kaye Thomas). Yep, the one who slept with Stifler's mom.

Michael (David Krumholtz) was often overlooked in favor of adorable nerd Cameron (Joseph Gordon-Levitt), so it wasn't exactly considered cool to crush on him. But, he pretended to be Shakespeare for a woman, OK? It melts my heart every single time.

Because there's nothing more embarrassing than having a crush on this guy, even if he is Matthew McConaughey.

Jeff Daniels' Harry Dunne sure is dumb. If only the heart listened to the mind...

Jim Carrey in The Mask is absolutely terrifying, which made your strange crush on the green monster even more confusing.

A crush on Chris O'Donnell is nothing to be embarrassed about, but admitting to have loved any part of 1997's Batman & Robin is almost never acceptable.

Played by Hector Elizondo, Barney was the manager at the hotel in Pretty Woman who was so suave, sweet and funny he was impossible not to love. Of course, he was also far from a romantic character in the film, so admitting your crush could be a little bit awkward.

Kocoum was definitely attractive (for a cartoon, obviously), but he was also boring AF which made it safer to lie and say you were Team John Smith like your friends. But in secret, Kocoum was all yours.

Now that many of your embarrassing '90s crushes are likely out in the open, one question remains: who are you going to be embarrassed to have fallen in love with in the 2000s?