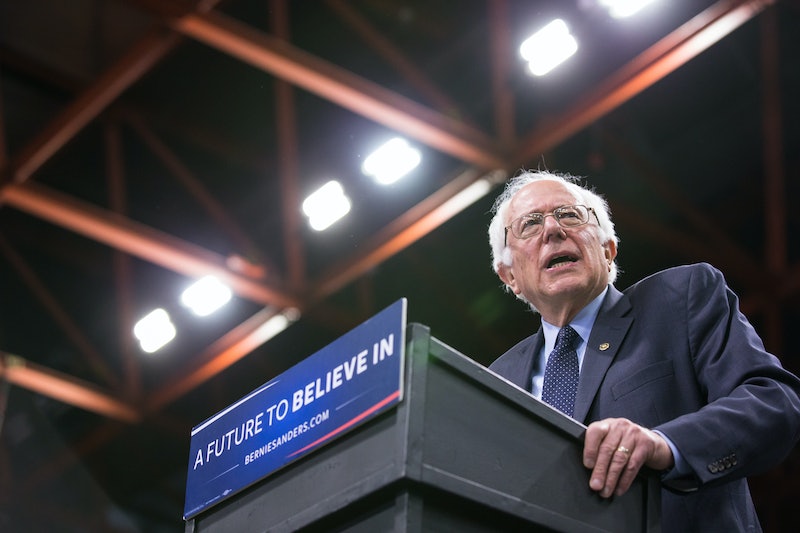 Tiny Northeastern states are getting their turn in the spotlight as we bear down on a string of primaries on April 26. Rhode Island has just 33 Democratic delegates to send to the national convention this summer, including nine superdelegates. That's pretty meek, but Bernie Sanders can't really afford to lose in his quest to keep his presidential hopes remotely feasible. The question is: Will Sanders win Rhode Island?

Brown University is expected to release the results of a new poll ahead of the April 26 primary, but in the meantime, we’re left with data from back in February, which shows Clinton holding a relatively modest lead over Sanders at nine points. I mean, this is modest compared to her double-digit win in New York and what's predicted in upcoming primaries, like Pennsylvania's. For what it’s worth, a lot of people expect the Rhode Island primary to mimic the Massachusetts one, which would mean a victory for Clinton, but a slim one.

With the few Rhode Island delegates being awarded proportionally and all, we can safely say that, as lovely as Rhode Island undoubtedly is, scales will not really be tipping in a major way for either Clinton or Sanders in the wake of this primary. Clinton will slightly extend her lead, and Sanders will still be around while he figures out his next move.

It’s been a rough week for Sanders, and even a great performance in Rhode Island wouldn’t give him enough delegates to combat the gaping wound the New York primary loss left in his campaign. Rhode Island Public Radio (RIPR) reported earlier this month that while there seemed to be grassroots support for Sanders in Rhode Island, the state’s elected officials seemed to be firmly linked to Clinton.

“Elected Democrats and party poohbahs were as scarce at the Sanders event as Donald Trump stickers on the capital city’s liberal East Side,” wrote RIPR’s Scott Mackay. “No statewide elected officials showed up. The only elected officials present were Democratic state senators Josh Miller of Cranston and James Sheehan of North Kingstown, who has endorsed Sanders. Miller has not made a formal endorsement." Mackay noted that Sanders' event was "in sharp relief to the turnout at the opening of Clinton’s state headquarters last week, which attracted such Democratic household names as Gov. Gina Raimondo, State Party Chairman Joseph McNamara of Warwick, former Providence mayor Joseph Paolino Jr., and former state Democratic chairman Mark Weiner, a top Clinton fund-raiser and supporter.”

Local news station WPRI reported that although Rhode Island has 419 polling locations, only 144 of them will be operational on April 26 in order to cut down on expenses. Similar closures were made ahead of the 2008 primary, though this latest round of cuts leaves the state with 33 fewer open polling locations than it had even then. As a result, a host of frustrated Rhode Island voters may be more likely than any specific Democratic outcome.