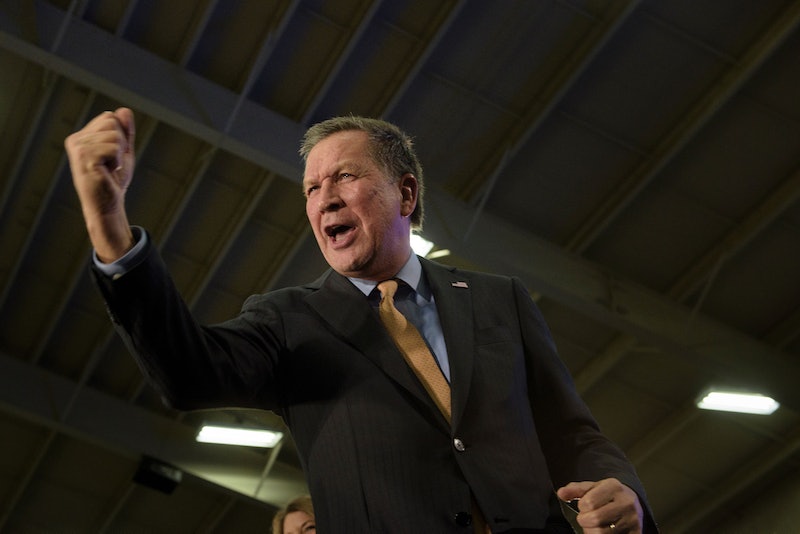 John Kasich scored a big win in Ohio on Super Tuesday part three. The GOP candidate, who is also the state's governor, received far more votes than any other candidate, taking all 66 delegates in the Buckeye State and keeping his campaign hopes alive. A victory in any other state would certainly be a big deal for Kasich, but Ohio's winner-take-all designation is what truly made the primary victory memorable for Kasich. Although there are a few other states coming up with similar primaries, it's almost easier to list which states don't have winner-take-all primaries rather than the ones that do; Arizona, Delaware, Montana, Nebraska, Ohio, New Jersey, South Dakota, and Florida stand as the only truly winner-take-all states for Republicans.

There are very few complications on the left when it comes to winner-take-all primaries and caucuses. Democrats have a proportional system for delegates, while superdelegates are free to throw their support to whomever they please. Republicans have far fewer delegates to acquire because there are technically no superdelegates on the right. Instead, states are divided by proportional, winner-take-all and winner-take-most designations, with the occasional unique set of rules popping up in states like New York, Michigan, and Texas, where winner-take-all rules apply only if a candidate scores at least 50 percent of the vote.

The South Carolina GOP primary has a similarly unique hybrid system in which the candidate with the most overall votes receives a certain amount of delegates, while remaining delegates are distributed based off of congressional district wins. This is what made front-runner Donald Trump's South Carolina GOP primary win earlier this primary season truly spectacular. Since switching to a hybrid system in 2000, no other Republican candidate had won all congressional districts and the overall vote in the state.

Still, a majority of states aim to make the process far less complicated than a hybrid system allows. As of this writing, the upcoming proportional-delegate primaries for Republicans include California, Connecticut, Nebraska, New Mexico, New York, Oregon, Rhode Island, Utah, Washington, and West Virginia. Past proportional primaries and caucuses have been held everywhere from Iowa to Maine.

So, how is the big winner in Ohio expected to fare in the next set of primaries and caucuses? John Kasich is wholly unconcerned. His campaign is looking toward a brokered convention, anyway. In the face of a seriously divided Republican party, it appears that the remaining primary events matter less when the GOP is more concerned with a single candidate being unable to meet the delegate requirement to nab the nomination.