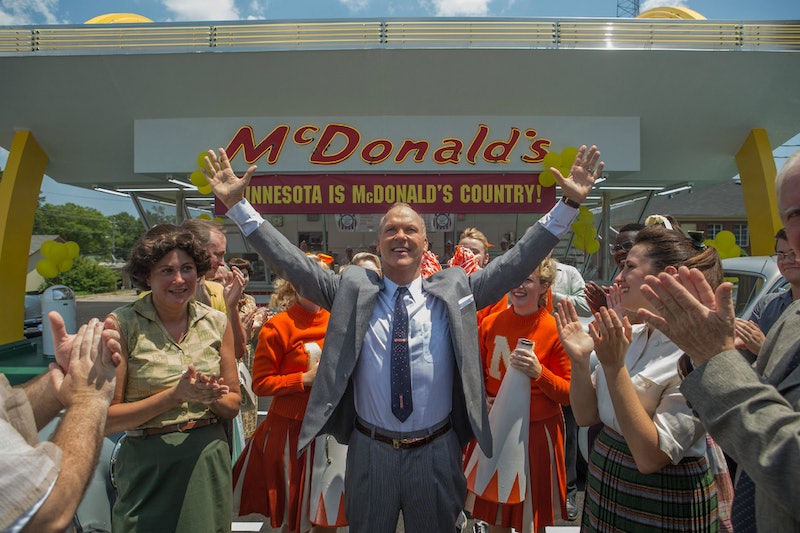 If you want to win an Oscar, there are certain things you should and shouldn't do when making your film. You should make a drama with recognizable stars, preferably based on a true story. You shouldn't make a science-fiction movie — or a horror movie or a comedy or pretty much any genre other than dramas and, oddly enough, musicals. Of course, there are exceptions to every rule, but every filmmaker knows there is a certain recipe for Oscar success. And, judging by the first official trailer for The Founder , this movie has pretty much single ingredient in that recipe.

It's kind of ironic, then, that the movie itself is also pretty concerned with ingredients: the ingredients of the perfect hamburger; the ingredients of a lucrative franchise; the ingredients of what makes a man a self-made millionaire. The Founder tells the story of Ray Kroc, an Illinois milkshake machine salesman who was singlehandedly responsible for turning a SoCal burger joint into a global fast food empire — and stole the company from its original owners in the process.

So what is the recipe for Oscars success? Let's allow the Founder trailer to illuminate the 11 crucial ingredients:

1. Start With An Oscar-Nominated Star

Very few actors in history have appeared in back-to-back Best Picture winners, a list that includes Meryl Streep and John Gielgud. Even fewer have headlined back-to-back Best Picture winners; Birdman and Spotlight star Michael Keaton is the first since Russell Crowe in 2000's Gladiator and 2001's A Beautiful Mind. In The Founder, he stars as Kroc, a good sign for the movie's chances right from the start.

2. Mix Together With Some Harvey Weinstein

The Oscars are practically synonymous with the name of über-producer Harvey Weinstein. Last year, when his two high-profile movies Carol and The Hateful Eight failed to make the cut for Best Picture, it was the first time he didn't have a dog in the race since 2008. You can bet he'll step up his game in 2017 to make sure that doesn't happen again.

Earlier this year, a full 50 percent of the Best Picture nominees were based on true stories, including the winner, Spotlight. Playing a real person is also awards fodder in the Best Actor race, where the past four winners in a row have all been portraying characters based on real people: Leonardo DiCaprio (as Hugh Glass), Eddie Redmayne (as Stephen Hawking), Matthew McConaughey (as Ron Woodroof), and Daniel Day-Lewis (as Abraham Lincoln).

If your movie isn't based on a true story, you better make sure it has a period setting that can make the large pool of older Oscar voters nostalgic. Luckily for The Founder, it has both. Like Bridge Of Spies, Brooklyn, and The Revenant, this biopic takes place in a bygone era that is catnip for voters.

Of course, the more Oscar nominees and/or winners you can fit into your cast, the better. Even if they're relegated to "supportive wife" roles (like Amy Ryan in last year's Bridge Of Spies), their name recognition will make Academy members pay attention. Two-time nominee Laura Dern (Wild, Rambling Rose) fits that role to a tee here.

Once you have the voters' attention with previous Oscar nominees, then you can round out your cast with well-respected — if under-awarded — character actors, like John Carroll Lynch and Nick Offerman, who play the McDonald brothers here. Then the Academy can pat themselves on the back for nominating them for their first-ever Oscar. (Hopefully.)

7. Sprinkle It With A Pedigreed Director

Hancock may not yet have an Oscar nomination himself, but he did previously direct The Blind Side to a Best Picture nomination — and its star Sandra Bullock to a Best Actress win — in 2009. (He also directed by Oscar bait-y but under-nominated Saving Mr. Banks.) His proven track record will make voters automatically take notice of his work, more than if it had been directed by an unknown.

Sadly for the more light-hearted among us, comedies rarely win Best Picture; with the Academy, often grimmer is better. If your main character suffers through a debilitating illness or an intense ethical dilemma or cruel persecution and ultimately emerges triumphant — or, even better, dies! — then you've got it made. So it's not a surprise to see the trailer quickly give way from happy-go-lucky period nostalgia to shouting matches, slammed telephones, and unscrupulous backstabbing.

9. Stir In A Flawed Protagonist

Good people are boring. That's why Superman has been so hard to properly adapt to the big screen; he's too noble. You've got to give your main character at least one flaw so your Oscar-nominated lead actor has something meaty to chew on. The trailer spells out Kroc's fatal flaw for us: "When's enough gonna be enough for you?" his wife asks him. "Probably never," he answers.

10. Garnish With Some Confidence

Given how many movies are competing for attention during any given Oscar season, you've gotta have that special something to help make your stand out — that undefined quality that you just know when you see it. Everything about this trailer is confident, from its brisk pace to Michael Keaton's wry grin that closes it all out. It's like they know they've made a good movie.

11. Bake Until A Fall Release Date

Naturally, if you want Oscar voters to remember your movie when they're casting their ballots, you'll want to release it in the fall. That used to mean a premiere sometime in November or December, but, as Oscar season has gotten increasingly crowded, August and September release dates have become increasingly common as well. This movie apparently wants to get out ahead of the pack, landing within Oscar season — but as close to the start of it as possible.

Will all of these ingredients combine to make a perfect Oscar treat the Academy members will love to savor? We'll find out when The Founder opens on Aug. 5, 2016. In the meantime, analyze its recipe for yourself right here: