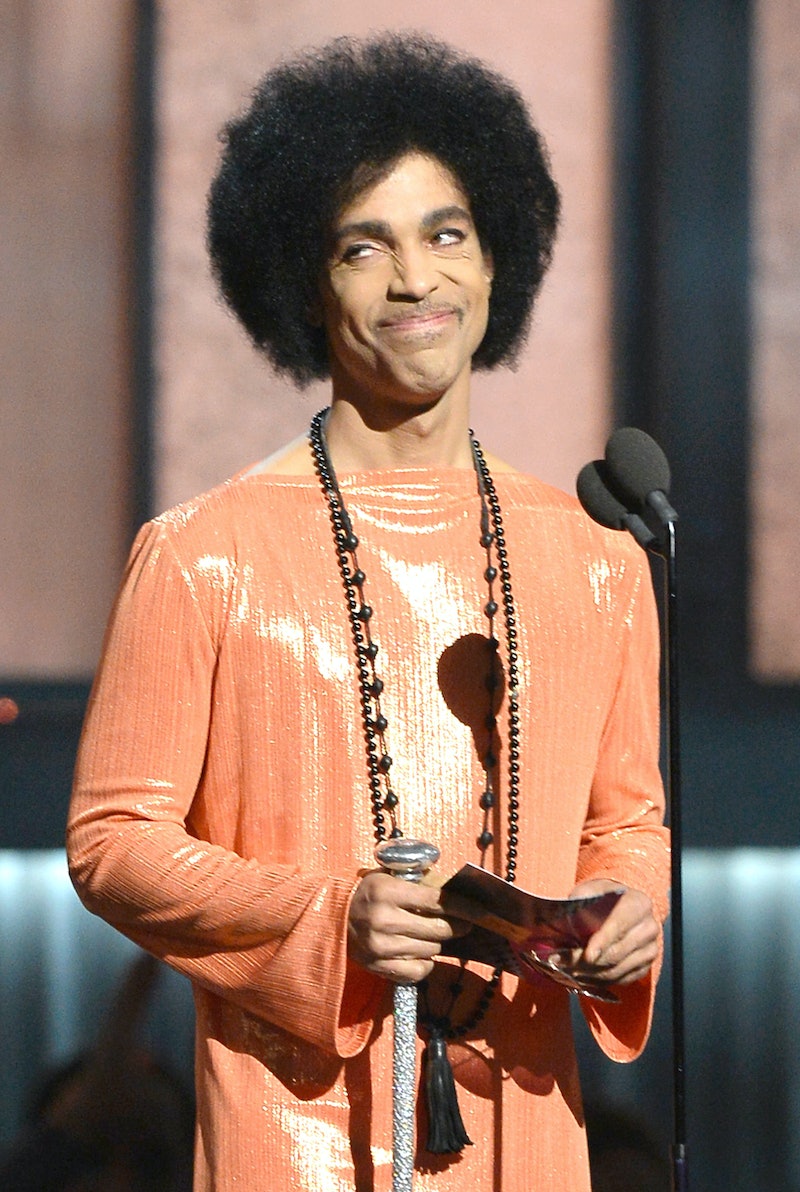 The sad news is true: Prince's publicist confirmed in a statement Thursday that Prince had died at his home. Bustle has reached out to Prince's representatives and the Carver County Sheriff's Office in Minnesota. Although most details concerning the details of Prince's death have yet to be released, one thing is for certain: We're all mourning the sudden loss of a hugely influential and talented musician. Prince, whose full name was Prince Rogers Nelson, died at the age of 57, which feels decades too soon.

Prince's career took off in 1984 when he released the hit album 1999, and from there went on to receive 10 Grammys, won the Academy Award for Best Original Song Score in 1995 for "Purple Rain," and sold over 100 million records during his career. While his widely celebrated music is obviously a huge accomplishment in itself, Prince's legacy has a special place in a lot of people's hearts because of who he was as a person and the motivational, inspiring words and lyrics he spread with his fans.

One of my favorite quotes from Prince comes not from a song (I know, I know; there are too many good songs for me to pick a favorite lyric), but from an interview. In a 2004 interview with Rolling Stone (reproduced on the magazine's website in 2011), Prince told writer Anthony Decurtis, "Despite everything, no one can dictate who you are to other people."

In context, Prince said this quote in reference to the wide range of opinions others have spoken about him over the years, referring to the behavior that he himself noted might have portrayed him as a "petulant brat." In spite of this sort of backlash, Prince expressed his gratitude that people still found his work inspiring, and saw his music as a source of inspiration and a place where new artists could stretch the boundaries of music genre and self-expression. Basically, people are going to see you as they want to see you, but one person disliking you doesn't negate the powerful impact and bond you may have with so many others.

For me, this is an important lesson that can stretch beyond music to all forms of creativity — and even to life itself: Some people won't like what work you produce as a matter of taste or tradition, and some people won't like you as an artist. Heck, some people may not even like you as a person. At the end of the day, though, there will be other people who like and appreciate you just as you are, and who see your dedication to being yourself and being genuine to your true self as a source of motivation and inspiration. And, perhaps more importantly, you are the writer of your own story — no one else gets to write it for you. That's an important thing to remember.

Regardless to your opinion on his music, or him as a person, it's pretty indisputable that Prince was an innovator in music. He opened the doors for much creativity in the arts for decades too come, and his music will continue to do so even now.