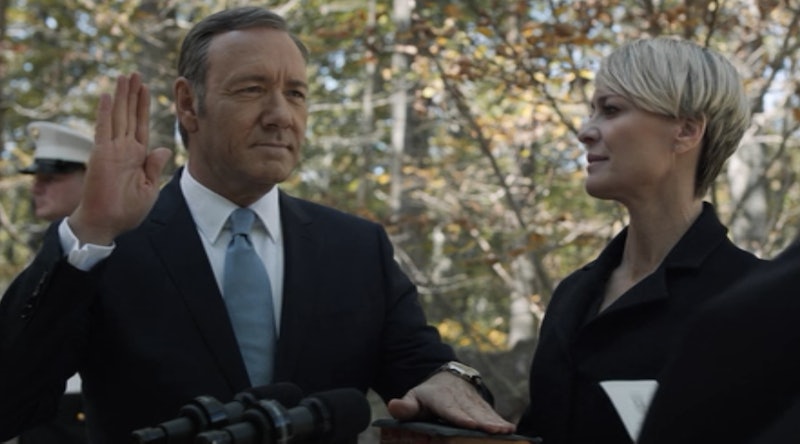 "Did you think I'd forgotten you?"

It is this phrase, not the highly-teased "welcome back," that begins Francis Underwood's first monologue of Season 2. And this act of fourth-wall shattering speech shows Frank's primary manipulation tactic: feigned trust. While last season Frank spent a considerable amount of time demanding that Congresspeople trust him, and demanding their "unwavering loyalty" to his schemes, this season he throws his "trust" at the feet of whomever he has decided to screw.

Do not confuse this appearance of trust with power, for in this season we learn how great leaders fall: although it starts with Congressman Underwood's swearing-in as Vice President, it ends with his hostile takeover as leader of the free world. Although Frank displays his usual mix of aggression, guile, and fatalist dark humor, Claire is the true star of Season 2. She gets both more morally torn and more villainous in each episode, which makes her the far more complex character by the time the word "impeach" is uttered.

If you haven't already heard the most widely-leaked spoiler of this season, I'll get it out of the way for you: Frank pushes the forever-nosy Zoe Barnes in front of a DC Metro train. So she's out of the picture, and Frank and Claire move on to bigger fish, like the Chinese government and Raymond Tusk.

Before I get into too many secrets and details of state, I do want send a few words of caution to viewers. This season delves heavily into the issues of stalking and sexual assault, so please don't read or watch if these are triggering to you. Let's remember that emotional well-being comes first, as the writers of Season 2 clearly forgot when they ascribed negative stereotypes to people with mental illnesses. But I'll get to that stump speech after Frank takes up residence in the Oval Office.

Although I may not have correctly predicted Frank's enemies from the teasers, I am glad that Claire grew both more righteous and more despicable, in equal measure. My favorite of her many angry outbursts is her threat, leveled at World Well's Jillian, that she is willing "to let your child wither and die inside you." While she aids Francis with his illegal (and sometimes lethal) maneuvers, she also champions a bill to help victims of sexual assault in the armed forces, because she is a survivor of sexual assault. While her righteous anger toward rape culture and slut-shaming bursts forth in one episode, in the next she manipulates her former lover to circumvent scandal.

The combined efforts of Claire and Francis eventually allow them to cause the President to resign in fear of impeachment. But the journey to this inevitable conclusion shows them at their most ruthless, as well as their most vulnerable. At one point in the Justice Department's investigation into possible money laundering involving Raymond Tusk, the Chinese, and every Democrat on the Hill, Frank declares everyone "fair game."

It is also around this time that Jackie Sharp, the new House Majority Whip, finally does something interesting aside from fooling around with Remy, and gets her impeachment vote-gathering whip out. When the stakes include jail time and impeachment, we finally see Frank, Claire and their minions at their best. They coordinate attacks on the president's marriage, they manipulate Congress, and they have a threesome with Meechum the Secret Service guard, just for fun. Toward the end of his coup, Francis asks Doug Stamper to look for "any remaining vulnerabilities," which are eradicated shortly before Stamper's death. Soon after Claire sits on the steps crying silently--which leaves us wondering if she has some weak spots left, or if her trust in Francis has wavered.

Surely, in the coming days, after the rest of Twitter catches up to the truly nonstop binge-watchers like myself, there will be discussion of whether Season 1 or 2 was "better." Instead of answering that question, allow me to remind you that "the road to power is paved with hypocrisy, and casualties," and Season 2 has enough of both.