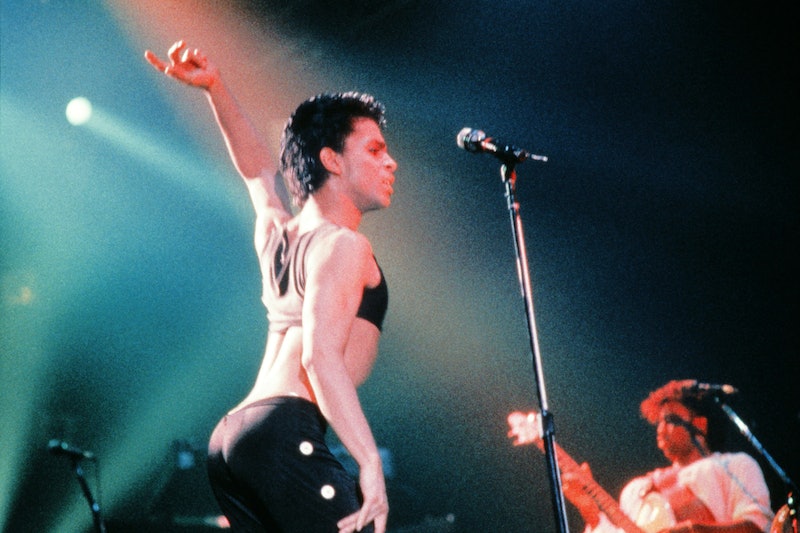 Let's be honest with ourselves: we're not over Prince's tragic passing, so we should all stop fighting it and just embrace the impossible process of simultaneously mourning his death and celebrating his life. And what better way to do that than by looking at celebrity quotes about Prince's life to help us remember how many people he inspired and made an impact on, from the no-name girl in Portland, Oregon who just loved his music to the A-Listers who can't believe he's gone? While I think I'd be surprised by how many people just like me are in that first category, I'm even more blown away by the amount of big names in second one; people who Prince paved the way for, and whose influence is rich in their own work. And I'm not talking about people reminiscing about Prince now that he's gone — I'm talking about people who shared their stories while he was alive.

These stories are the kinds of bittersweet revelations that simultaneously make it harder and easier to cope with his death. Harder because it reminds us of all the wonderful things about Prince that make it impossible to face the fact that he's no longer with us, and easier because it's so clear that he lives on in the people he inspired. In short, it's been a lot. That isn't going to change, so I've decided to just own it, to sit in the feeling of him being gone and soak up all the beautiful words that some of the brightest stars out there have shared about the bright light that was Prince while he was alive. Just stand out there in the Purple Rain for a second and be OK with getting wet, y'know?

Would it surprise you to know that Kesha broke into Prince's house? Because Kesha broke into Prince's house. Before she was a star, she paid a gardener $5 to look the other way and went right through his unlocked door, into his elevator, and out into his house, where she gave him her demo. And all he ever did was look at her like, "What are you doing here?" Cool as a cucumber, that man was.

Once upon a time, Queen Latifah met Prince in an elevator, and she was so overwhelmed by being so close to her idol that she had to mentally hold herself back from reaching out and touching him. "I’m just on this elevator and I look and I’m like, That’s Prince, Prince is right there. OK, be cool, be cool, be cool. Don’t touch Prince, don’t touch him. I just wanted to touch him." Pretty huge that he was such a big star that he even made other big stars nervous.

In that same conversation with Queen Latifah, Jimmy Fallon shared his own experience, which was basically getting pranked by the late star. After turning down the invitation to dance with Prince onstage multiple times, Fallon finally relented, only to get left out in the spotlight when both Prince and Questlove, who had lured him onstage, disappeared.

But it sounds like if you let your guard down with Prince, he lets his guard down with you — when the singer was on New Girl, Max Greenfield got so absorbed in dancing to his music that he was full on letting loose, and he says Prince was actually into it. "I'm dancing and his song is on, and I completely forgot about the show, the character or acting at all. ... And I kind of looked over at him and he gave me a look like, 'Hey, man. I'm proud of you.'" Gotta love that.

The first time Gabrielle Union ever got invited to one of the fabled Prince parties, she was so intimidated that she started by listing her credits and ended by offering him a tuna casserole. It seems like the dude really did have that effect on people.

You might think of Anderson Cooper as a pretty level-headed guy, but his fandom for Prince is so great that he once fought Dave Chappelle tooth and nail for one of the singer's guitar picks.

You know you're working with a real personality when you can turn a story directly into a sketch without changing a thing, like Dave Chappelle did with the story of Prince completely spanking Eddie and Charlie Murphy in a pick-up game of basketball. Wearing a blouse, obviously. And, afterward. he served them pancakes that Charlie Murphy described thusly, "They were good, man. They were really good. They were actually perfect. They were as good as he played guitar."

But for as down-to-earth as Prince comes off in a lot of these stories, Tracy Morgan of all people knows that Prince knew how to stand up for himself, which he learned after getting a little sloppy at a party years ago.

About seven years ago, I went to a party at Prince's house in Los Angeles. We had to take a bus there — Jennifer Lopez, everybody was on this bus — and Prince performed with his band in the living room. The liquor was flowing and everybody was getting nice. At the end of the night, me and my boy Bradley were drunk. We had these two girls on the sofa and we were talking, joking, laughing. Prince and his wife came downstairs and they had on purple pajamas. He said, "Tracy, get the f*ck out!" As I walked out the door, I grabbed him by the back of the neck and I pulled him close to me. I noticed that mole on his face... and I said, "My father loved 'When Doves Cry.' " And he said, "Yeah, yeah. Just get the f*ck out."

Even in his purple pajamas, Prince knew what was up.

I don't know about for you, but, for me, getting a clearer picture of who this man was when he was alive is as heartbreaking as it is heartwarming. I'll be clinging to this all day and forever if you need me.