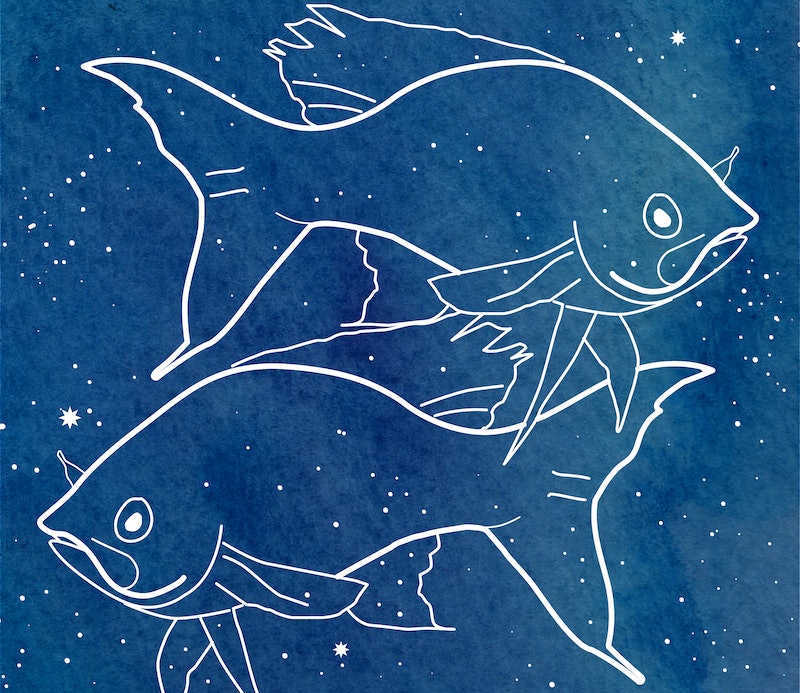 As you may have heard, by this time next week, we’ll be dealing with the effects of five planets being retrograde at the same time. This hasn’t happened for about 10 years, and it’s kind of a big deal for everyone — but it also means something different for each individual sign. Since I’m a Pisces, naturally that means I’m wondering exactly what five planets being retrograde means for Pisces — so I did a little digging to find out. The short answer: Things are going to slow down, and communication is going to be difficult. Fun!

I’ll be honest: I’m not a huge believer in astrology. While I do think it’s kind of interesting that the Seasonal Birth Effect is an actual thing, most of the “what your birthday says about you” information I’ve seen is largely correlational — and as we all know, correlation is not causation. Plus, speaking from personal experience, my sign just doesn’t fit me terribly well: Although I do have the creative leanings characteristic of most water signs, I’ve always gotten the impression that Pisces should be a lot more… uh… ethereal than I am. (I am many things, but ethereal is not one of them.) The personality description pegged to this sign usually includes words like “dreamy,” “mysterious,” and “elusive” — which just aren’t really me. Like, at all.

Since I’m not a big astrology believer, it shouldn’t surprise anyone that I am also not an astrologer; as such, I’m no expert, so you might want to take anything I say with a large grain of salt. Here’s what my research about the subject has found, though — so for the curious, let’s take a look at what each of the five planets being retrograde might mean for Pisces.

Jupiter, which turned retrograde on Jan. 7, is apparently “the guardian of the abstract mind”; when it’s retrograde, though, personal growth has a tendency to stop in its tracks. For Pisces, the losses while Jupiter is retrograde are often financial — your net worth might drop, you might find out that a loan will never be repaid, or something like that. On the non-monetary side of things, it’s also possible that you might lose a significant relationship in your life. On the plus side, though, Pisces tend to use setbacks for the forces of good; now will be a good time to take stock of where you’re at and reorganize your life accordingly.

Saturn turned retrograde on March 25; the planet is usually all about hard work and discipline, but when it’s retrograde, it’s a good time to take a look at what you’ve already got going on in your life, rather than start anything new. Saturn is a teacher, so take the opportunity to learn whatever lessons it’s got in store for you.

Pisces tend to be lacking in self-discipline (or so it’s said — I’ve got plenty of self-discipline, so again, reasons maybe not to take all this too seriously); with the planet gone retrograde, then, it’s time to buckle down, take a good, hard look at things, and figure out what you need to do to move forwards.

Mars went retrograde recently — on April 17 — which means that the energy influenced by this planet might be a little more lethargic than usual. Generally speaking, April has been a good month for Pisces; however, fishy folk may have experienced something of a “speed bump” when Mars retrograde began. But the good news is that the aforementioned speed bump may actually be a good thing — it’ll give you a little more time to think about what’s going on in your life right now. (Can you tell that one of the major themes of planets turning retrograde is that everything slows down a little?) No need to try to fight against the current; just go with the flow and see where it takes you.

I know, I know; technically Pluto isn’t really a planet anymore. It’s a “dwarf planet” — a planetary-mass object that isn’t an actual planet, but also not what’s called a “natural satellite.” But as far as astrology is concerned, it’s a planet, and it turned retrograde right after Mars, on April 18. Typically Pluto is all about transformation and rebirth — which isn’t always pretty, but it’s necessary for us to grow as people, so at least there’s that. When it’s retrograde, it’s time to let go of attitudes or thought processes that might be holding you back. As astrologer Lynne Koiner puts it, it's “a time to undergo an internal form of house cleaning.”

Pisces are known for being sort of inward-looking people anyway, but it’s likely that you’ll feel even less like being around people than usual while Pluto retrograde is going on. That’s OK; let yourself do whatever you need to do. House cleaning might be kind of painful while it’s happening, but it’s always an accomplishment once it’s done.

Lots of things happen when Mercury, which is usually in charge of communication, is retrograde: Wires might get crossed, plans might get messed up, and so on and so forth. Everyone hates Mercury retrograde; we blame it for all the bad stuff going on in our lives the same way we blamed El Nino for it in the ‘90s. It goes retrograde on April 28, so brace yourselves — and if you’re a Pisces, you’ll want to make sure you’re extra careful with how you communicate during it. Pisces aren’t terrific communicators at the best of times, so with Mercury retrograde messing with everything, there’s an even greater chance than usual that something will get lost in translation somewhere.