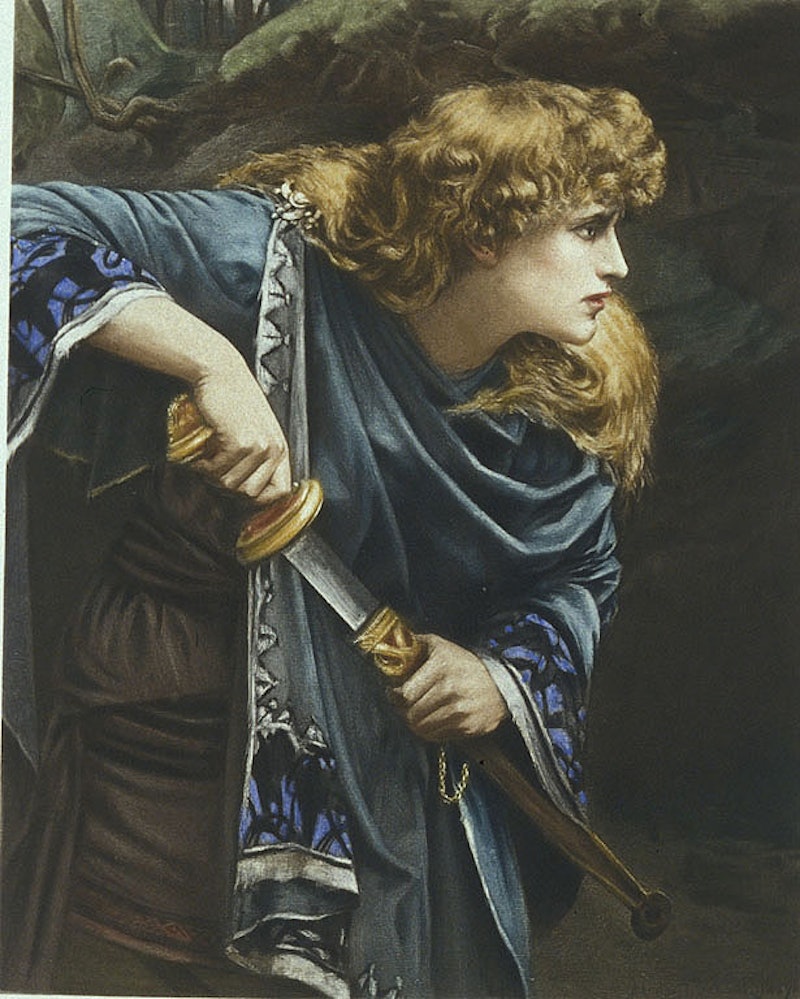 You may have found yourself wondering on more than one occasion: was William Shakespeare a feminist? The short answer is... no. He wasn't. Being a feminist just wasn't a thing in England 400 years ago: the word "feminism" didn't exist until the 1890s, and gender equality wasn't exactly a hot button topic. Elizabethan England might have been ruled by a powerful single lady, but women at large were still expected to get married, obey their husbands and pump out babies.

But the long answer to the question, "Was Shakespeare a feminist?" is a resounding, "well, kind of!" He wasn't a feminist as we define the term today, and he certainly wasn't a intersectional feminist. But there's no way he could have been. We're talking about a period of time when it was illegal for women to act in plays—by law, all of Shakespeare's heroines would have been played by men in drag.

So, the fact that Shakespeare was writing women with complicated inner lives, with fears and sexual desires and wisecracking attitudes, was actually pretty radical. In a world that viewed women as the "weaker sex," Shakespeare wrote some of the strongest female characters in literature. Even if he's not the ideal feminist today, we can almost definitely call him a kick-ass proto-feminist.

Women may not have had equal rights in Shakespeare's world, but in his plays they're free to be just as witty, or brave, or lovesick as men. Often his heroines are the ones keeping it together while the men run around being emotional wrecks. Shakespeare loved to mess with gender roles. And yes—his audience probably thought it was just hilarious that a woman was being less emotional than a man (his audience also probably smelled terrible and threw fruit at the actors). But that doesn't take away from the complexity of Shakespeare's women.

Romeo and Juliet is one of the first Shakespeare plays where the female lead gets equal billing to the dude. She's equally important to the story, too. Romeo is a touchy-feely guy who likes sighing poetically and talking about the moon. Juliet gets stereotyped as a silly romantic teen as well, but if you look at the text, she's really the more grounded, intellectual one. She speaks over him, she shuts down his mushy moon metaphors, and she's the one who gets a lengthy soliloquy about how freaking excited she is to have sex with Romeo for the first time. She's a teenage girl with brains and sexual desire. The play condemns her hateful family and for trying to force marriage on her, but Juliet is never demonized for being a normal human woman. Because there's nothing wrong with being a normal human woman.

And then there are the Shakespearean women who dress in drag (so back in the day it would have been a male actor pretending to be a female character pretending to be a male character). Viola, Rosalind, Julia, and Imogen all end up disguising themselves as men. And sure, there are some classic drag jokes a la Disney's Mulan, like Rosalind almost kissing her (male) love interest while still dressed as a man (a classic sitcom mix-em-up!). But this is also a sneaky way for Shakespeare to take a female character and give her all the free range of a man.

There are funny women in his plays, like Beatrice from Much Ado About Nothing, who can fling an insult better than anyone. She falls for Benedick because he's the only one who can match her level of shade. There are brave women like Cordelia, who stands up to her father, King Lear, and tells him to stop being a whiny man-baby. There are romantic women like Desdemona, who ignores her father's threats and marries her true love, Othello (it doesn't work out great, but... who could have seen that one coming?). There are smart women like Portia from The Merchant of Venice, who disguises herself as a lawyer to get her dumb boyfriend and his friends out of trouble. There are power-hungry women like Lady Macbeth, who orchestrates regicide. And there are tough-as-nails women like Paulina from The Winter's Tale: when her king tells her he'll have her burnt to death, she comes right back with "I care not."

Shakespeare writes strong women. And Shakespeare writes weak women. I know that doesn't sound like an impressive proto-feminist move, but hear me out. It's not all bad ass queens rolling their eyes at men. Shakespeare also wrote Ophelia, a young woman who's been so mistreated and infantilized by the men in her life that she's driven to insanity. He wrote Helena from All's Well That Ends Well, who's an incredibly talented female doctor (she repairs the king's anal fistula... Shakespeare is very specific about that). And yet, even though she's a medical genius, Helena spends all her time feeling heartbroken about a hot guy who won't go out with her. Shakespeare's women aren't just uniformly strong, they're also human.

But that's not to say that every Shakespearean portrayal of a woman is a beautiful beacon of pre-feminism feminism. Some of his earliest plays are less than progressive. The Taming of the Shrew, for example, is about a shrew being tamed. "Shrew," meaning a bad-tempered woman, and "tamed," meaning she's forcibly married and then psychologically tortured by her husband because that's hilarious. Yeah. It's a low point for Shakespearean women, especially since Kate, the shrew in question, is such a fierce, funny, man-hating character.

It's hard to argue that Shrew is a feminist masterpiece, but at the same time, we don't know how much of the play was meant to be taken literally. Kate and her husband Petruchio are equally matched with wits and wills; he's just as wild as she is, but it's fine for him to be a rude asshole because he's a man. If we're being very generous to Shakespeare, that could be interpreted as social commentary. And Kate's final monologue has her submitting to Petruchio, admitting that women are weaker... but is she just being sarcastic?

Why are our bodies soft and weak and smooth,Unapt to toil and trouble in the world. But that our soft conditions and our hearts Should well agree with our external parts?

Kate's certainly never been soft or weak before in the play. But we can't know if the scene was originally played for laughs or not. If not... yikes. Either way, the play was very early in Shakespeare's writing career. It's not hard to imagine that he grew as both a writer and a sort-of feminist. (Who among us doesn't have a cringe-worthy "novel" that we wrote in 8th grade?) By the end of his career he was writing women like Volumnia from Coriolanus, who prevents the destruction of Rome, or the powerful Queen Cleopatra. So it's safe to say that The Taming of the Shrew doesn't encapsulate Shakespeare's opinion of all women.

We can't know exactly what went on in Shakespeare's mind. He left behind no diaries to state his opinion on the non-existent issue of women's rights. In his will, he left his wife nothing but his second best bed (but to be fair, she inherited most of his wealth automatically, and the "second best bed" was just their marriage bed... so he only maybe meant it as an insult).

All we have of him is his writing. But if his plays are any indication, Shakespeare believed that women could be just as smart, brave, foolish, and funny as men (if not more so). For the most part, he wrote women as fully-formed human beings. They have thoughts and desires, and sometimes they screw up big time. Many of his most compelling heroes and villains are women, and his greatest female characters don't exist simply to further a man's story. For his own time, that was the equivalent of some hardcore feminism.

More like this
Beyoncé & Madonna’s “Break My Soul” Remix Honors A Group Of Black Icons
By Stephanie Topacio Long
We’ve All Had Bad Sex. Nona Willis Aronowitz Is Talking About It.
By Sophia Benoit
22 Movies On Netflix That Are Perfect For The Whole Family
By Bustle Editors
10 Must-Read New Books Out This Week
By K.W. Colyard
Get Even More From Bustle — Sign Up For The Newsletter