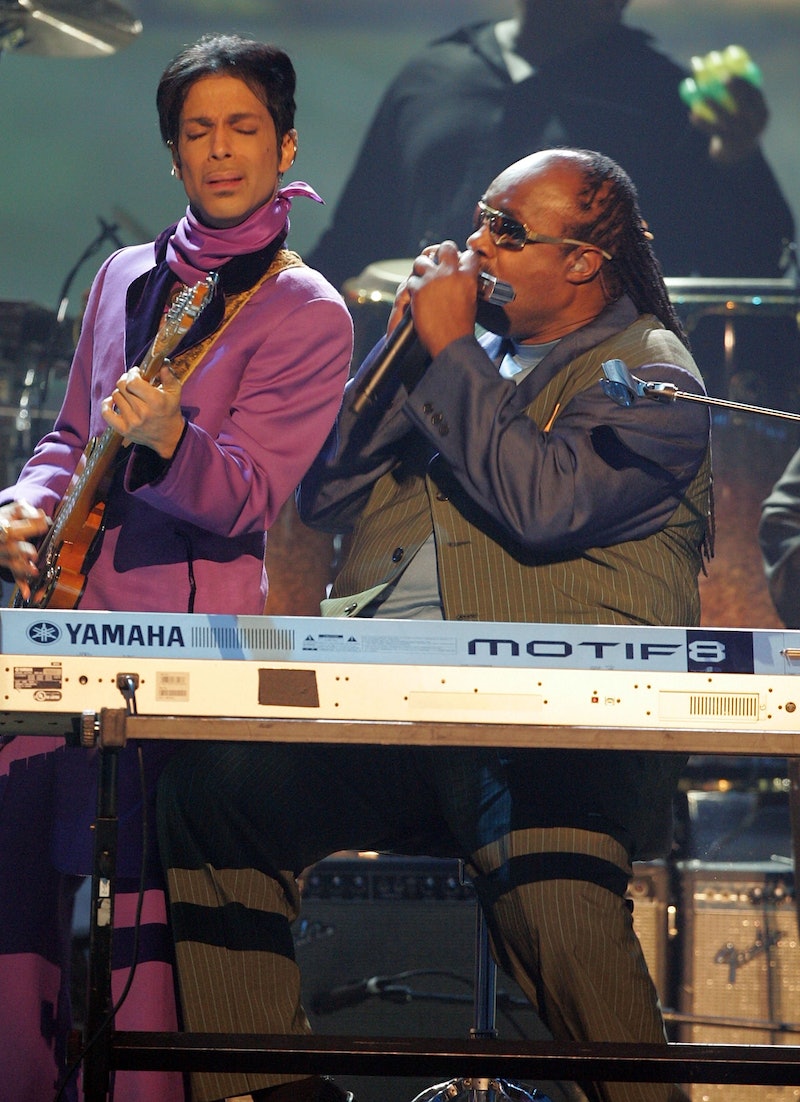 As more and more celebrities share their tributes to Prince following his death on April 21, I'm realizing that there is still so much brilliance to share about him and his spirit. In an appearance on CNN's Anderson Cooper 360, Stevie Wonder shared heartbreaking words about Prince's death and opened up about the "Purple Rain" singer's true musical genius.

We already know that Prince was a once-in-a-lifetime artist. Aside from being a talented songwriter, visionary, and public figure, he was a true musician, in every sense of the word. Prince could play many instruments and on the notes for his debut album, For You , he is credited as playing ALL of the 27 instruments on the recordings. That's right, 27 instruments, which include, but are not limited to: electric guitar, acoustic guitar, bass, bass synth, singing bass, electric piano, acoustic piano, mini-Moog, poly-Moog, Arp string ensemble, clavinet, drums, slapsticks, bongos, congas, and finger cymbals.

As a prolific musician himself, Wonder took the time to speak about how Prince worked to create his music. He told Cooper,

Wonder was visibly shaken throughout the interview, freely crying at one point, while giving beautiful insights about his experiences with Prince.

Wonder continued emotionally through the interview, opening up to Cooper about his immediate reaction and shock to the news of his death. He said,

I didn't believe it as I find it so hard to believe. You know, in this journey of music, we as artists that create the reflection of society and reflect, really the people that really want to see a better world, a better people, a unity of people, all those things — as did his music do and will continue to do for those of us who will continue to listen to it — it's a heartbreak to lose a member of that army of love.

I appreciate Wonder sharing this account of his friendship with Prince and his creative process. It's just another comforting reminder that we were lucky to witness and hear his genius, and we can always visit him through his music when he's missed.

More like this
Sadie Sink Would Escape Vecna From 'Stranger Things' With This Taylor Swift Song
By Grace Wehniainen
Zooey Deschanel Can't Be Anyone But Herself
By Samantha Leach
Kanye Joked About His Divorce To Kim K In A Surprise Speech At The BET Awards
By Alyssa Lapid
What Is Ariana Grande's Net Worth? When It Comes To Money, She Has No “Problem”
By Hugh McIntyre
Get Even More From Bustle — Sign Up For The Newsletter