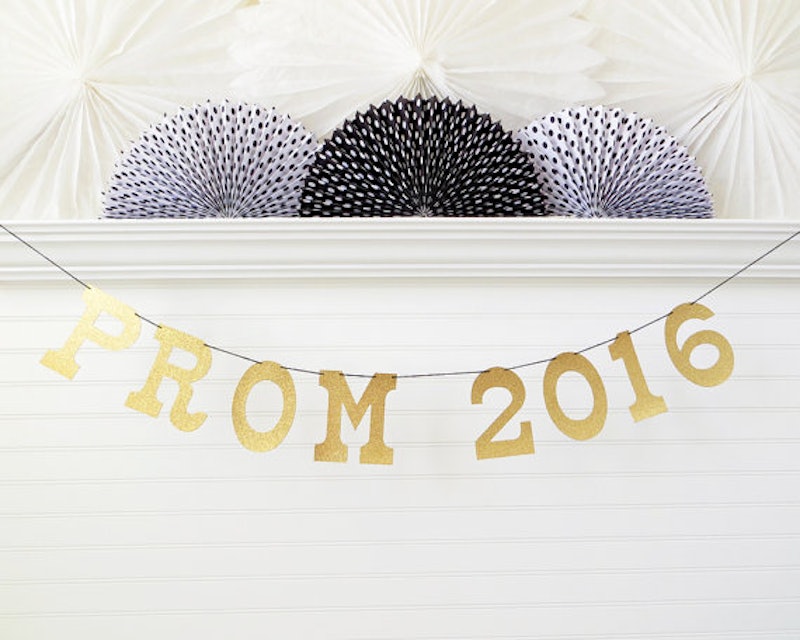 There’s no use fighting it — as much as prom may be about the memories, the promposal, and the celebration of the end of high school, it’s also about the photo opportunities. And prom party decorations can really add some oomph to your photos, even before the night starts. With a cool set up, your Instagram of you and your date is bound to look even better.

So, you found the perfect prom dress. You asked someone to prom with an epic promposal — or you decided to go to prom with friends, because that’s totally cool too. There is so much planning that goes into prom months ahead of time, and as it gets closer and closer, it’s time to think about smaller details.

Having a pre-prom party is a great way to ensure you get plenty of photos before heading off to prom itself. Plus, there’s nothing quite like riding in a limo to prom. From banners to balloons to plenty of fun photo props, these decorations will make any backyard feel absolutely festive. Stick to one color scheme to make things feel cohesive — gold is always a fail-proof option. Thanks to Etsy, your pre-prom party can look totally unique — and Instagrammable.

Whether you and your friends hold them up in a photo or you set them in the background, these balloons are picture-perfect.

Gotta stay hydrated! These cups make soda and punch extra festive. The lids prevent spillage on your dress, too.

Celebrate senior year and prom all in one.

What could be better than rainbow-speckled balloons?

Who says prom photos have to be traditional? Photo booth props spice things up.

Prop this confetti up on some cupcakes, and you're in for a truly Instagrammable dessert.

Giant paper flowers are sure to make any backyard way prettier.

Hold it in a photo or hang it up outside — this banner says it all wherever you place it.

Looking for a little more glam? Allow a gold mustache to do the trick.

The only thing better than balloons is giant balloons. Weigh 'em down at the end and position them strategically around your pre-prom party.

With metallic decor, even a suburban backyard can feel totally glamorous.

Making a balloon arch may be an intimidating task, but with a handy kit, you can make one yourself. Get ready for lots of compliments.