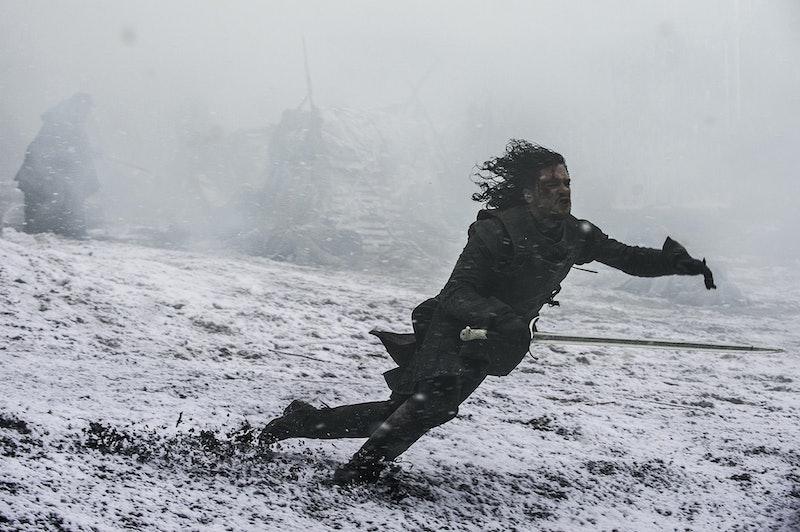 No disrespect to Tyrion, Arya, and Daenerys, but there's one Game of Thrones character whose fate takes priority now that the series has returned. We're finally getting the answers that have consumed us for almost a year. What happened to Jon Snow on Game of Thrones ? The Season 6 premiere shed some light on his situation, but "tabled" his ultimate fate.

Unfortunately, Jon didn't spring to life in the episode. He was a corpse for the whole first hour. However, we did get to see a lot of Kit Harrington's face and body as Davos Seaworth and the loyal members of the Night's Watch decided what to do with his remains. Melisandre was understandably confused, as she had seem him fighting at Winterfell in her flames — which could be promising, but it's not the first time that her predictions have been false. We also heard Ghost howling from his pen, which both brought the feels raining down and gave us a little taste of Jon even though he wasn't speaking or blinking.

Last season, Jon got duped by his peers with promised knowledge about his uncle Benjen Stark, who disappeared early on in the series. Jon was then stabbed multiple times and left for dead at Castle Black. It's not the first time that the Watch, which is largely made up of criminals, committed acts of mutiny on their leaders. It probably won't be the last, either. But, things took a turn Sunday night when those loyal to the Lord Commander stood watch over the body and Davos' started brainstorming ways to resurrect Jon Snow.

So, Jon Snow may have been on a table for most of the episode. But until his head is on a spike and/or Ghost is dead, I'd say he still has a role on Game of Thrones.