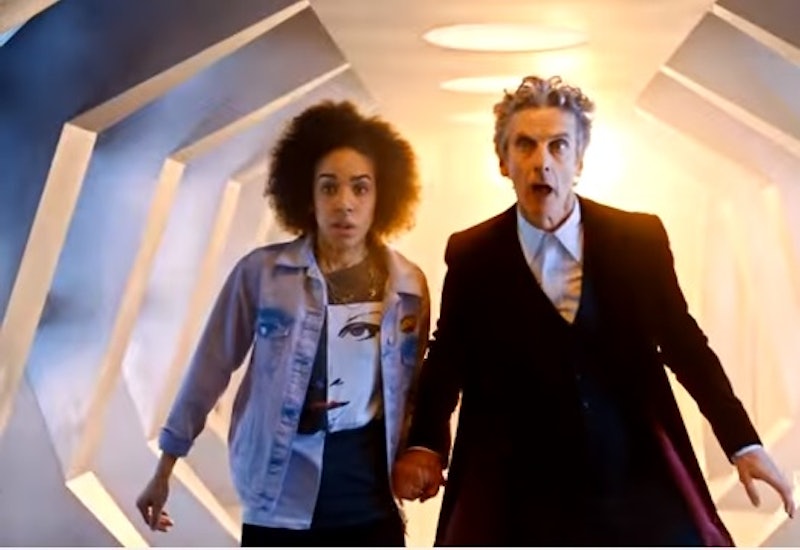 There is a new woman in the TARDIS, and fans are already falling in love. BBC America announced Pearl Mackie is The Doctor's new companion Bill in a teaser video, and the minute you see Bill in action you are going to need it to be 2017 immediately. Bill will be the final companion created by exiting showrunner Steven Moffat, and she is nothing like Amy Pond or Clara Oswald. Both Amy and Clara began their journeys with the Doctor as mysteries. Amy had her crack in her wall, and Clara had several incarnations who died leading the Doctor to dub her "The Impossible Girl." Bill doesn't appear to have a mystery attached to her persona, but she does have hilarious comedic timing.

Bill is exactly what Doctor Who needs right now. She is a different kind of companion with her own unique brand of energy. The teaser takes great care not to give anything away, but Bill's big personality is telling. From her wonderfully '80s-style outfit to her personality, the Doctor Who teaser drops major hints about when Bill is from and what kind of companion she will be to Doctor number 12.

Check out the teaser, and then join me below for everything the Doctor Who teaser reveals about your new favorite companion, Bill.

While it would be easy to write Bill's '80s jacket and cool t-shirt combo off as a retro throwback, there are two big clues that hint Bill is not from 2017. Near the end of the teaser, The Doctor tells Bill they have to get back to the future because 2017 needs them. If Bill was from 2017 it wouldn't be the future for her, it would be the present. If you think that's just semantics then watch the smile that spreads across her face — she is genuinely excited to see 2017.

She Doesn't Know What The Daleks Are

Granted, the timey-wimey nature of Doctor Who makes it hard to remember what has happened and what has been undone in the timeline for non-time traveling people — but at this point, most of England has seen a Dalek. They may not know what they are called, but unless you are Donna Noble and somehow missed every invasion, you have seen a Dalek. Bill has no idea what a Dalek is, which is another piece of evidence that she is from the '80s or the '90s. If she is from one of those two eras, that will make Bill the Doctor's first official companion not from the modern era since the original series.

Donna Noble Would Love Her

Bill is hilarious. Even when faced with imminent danger, she has time to make wry observations about the Daleks. "It's got a gun and a sucker? Why? Did they run out of guns?" Bill is instantly reminiscent of the amazing Donna, another companion who always had time for a laugh, right down to her interactions with the Doctor.

Like Donna, Bill seems to exasperate and amuse the Doctor in equal measure with her constant chatter. She clearly loves to talk and joke around, which leaves the Doctor adorably baffled.

Her Outfit Could Be An Homage To Ace

Ace was the final companion from Doctor Who's original run. She was a totally fearless teen from the '80s, and while Bill's clothes are not an exact match they are pretty close. This was likely an intentional nod to Ace from Moffat, since Bill is the final companion he will create for the series and Ace also happens to be among the series most universally beloved companions.

She Does Not Have Much Of A Sense Of Danger

Bill is either fearless or completely oblivious to the dangerous situation she is in. Either way, she approaches the Daleks with curiosity, not fear which is a pleasant surprise. This could lead to her getting into quite a few jams as the season progresses, but I would much rather have a companion who explores and asks questions than one who is afraid of everything.

She Is Wearing A Prince Shirt

As the Twittersphere pointed out, Bill is wearing a Prince shirt featuring the insert image from the Purple Rain album. Not only does this mean she has superb taste in music, she is also going to be really bummed out when she gets to 2017 — just like all of us here, in 2016.

Bill won't make her official debut until 2017, but I have a feeling she and the Doctor are going to make a brilliant team.

More like this
‘The Simpsons’ Will *Finally* Address How They “Predict The Future”
By Sam Ramsden
The 'PLL: Original Sin' Creators Say A’s Identity Will Be “Very Clear” By The Season Finale
By Alyssa Lapid
'The Sandman’s Ending Is A Departure From Neil Gaiman’s Comic Book Series
By Kadin Burnett
Everything To Know About The Musical 'Joker' Sequel – & Lady Gaga’s Role
By El Hunt and Sam Ramsden
Get Even More From Bustle — Sign Up For The Newsletter