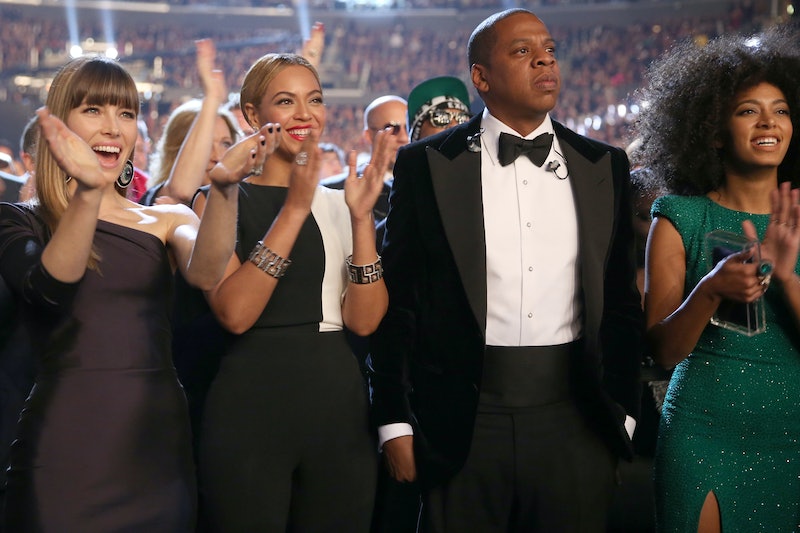 Elevatorgate 2014 has moved into its next stage: Beyonce, Jay Z, and Solange have released a joint statement to The Associated Press regarding the family's infamous elevator altercation that took place at Standard Hotel in New York City after the Met Gala on May 5. The leaked footage set the Internet on fire this week, and now we're hearing from those involved. Their statement reads:

The spreading of the elevator footage was followed by Solange's alleged erasure of most of Beyonce's image from her Instagram account — only to be followed a day later by Beyonce posting multiple pictures with her sister on her Instagram, and her sister following suit. The entire situation's had the rumor mill a-blaze, but until this statement, none of the parties involved had referenced the incident specifically. So what can we make of it now that they're speaking up?

Well, for one, you can tell this isn't a statement any of the parties wanted to make — they say it's a private matter, and that they're only addressing it because of the public's effusive response to the video. This family is one that's hardly a stranger to managing its public image, and this statement is perfectly crafted, if not a little too perfect. It's also likely to be one of the last unveilings we can expect from the Knowles-Carter camp.

We still don't know what really caused the attack in that elevator, though. When it comes to "moving forward" from that, then, we have to remember something key: When you're a celebrity there's a difference between moving forward publicly — which this says that they are doing — and moving forward once the cameras are no longer pointed your way.

Beyonce, Jay Z, and Solange all live a big chunk of their lives in the public eye, but they've also made it pretty clear that they value the parts of themselves they can keep to themselves. So when it comes to behind the scenes, we know no more about the relationship between these three than we did before — and that elevator scene made it pretty clear we didn't know much.

As for their public life, though? You can bet they'll be presenting a united front for the cameras ... moving forward.