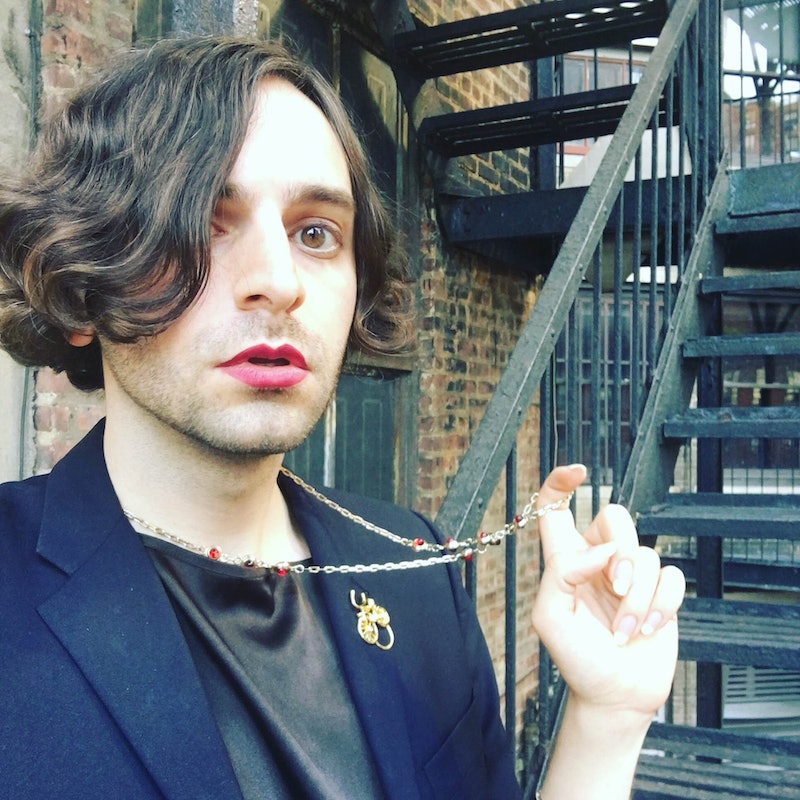 For many, makeup is a means for empowerment and a vehicle for self expression. The difference that simple swipe of lipstick can make is so magical, some of us cannot feel truly at home in our skin without our favorite beauty tools.

But for gender nonconforming people, (and pretty much anyone who's not a cis woman), beauty can come with a lot of baggage. While many GNC people find makeup empowering, it's often a double-edged sword: For gender fluid people, cis men, trans women and genderqueer folks, the very makeup that is so essential to their survival at times (either emotionally, professionally, or for the purposes of passing as cis on the street) can also be the very thing that puts them in danger. In other words, for folks who don't identify as straight cisgender women, makeup can mean anything from liberation, to a feeling of security, to unintentionally welcoming danger.

All things considered, it's important to acknowledge that non-cisgender women are utilizing the power of cosmetics with what they choose to wear on their faces. The following are some of their stories, first-person accounts of why, when it comes to makeup and non-cisgender women, things are slightly more complicated than they might seem.

For 24-year-old gender activist Jacob Tobia, an introduction to cosmetics happened with the stage makeup they wore for plays in high school. Although they loved the process of putting on the makeup and watching their face change, they hesitated in wearing it outside of stage productions for some time.

"I didn't start wearing makeup for real until freshman year of college when I bought my first tube of lipstick from the Dollar General," they tell Bustle in an email. "It was a really empowering moment when I first put it on and looked at myself in the mirror. I realized just how long I'd been putting away that part of myself...but I could finally let it free!"

While Tobia finds cosmetics empowering, they're sure to steer clear of conforming to any beauty ideals laid out by society for femme folks. "I know some femme people who feel like if they don't wear makeup, people won't be able to respect them or take them seriously or date them, and that is a scary thought to me," Tobia writes. "But as long as I'm the one making the choice to wear makeup and no one is forcing me to, it's a pretty empowering thing."

Though they love shopping for beauty products, especially their favorite cream lip stain from Sephora, they don't always feel comfortable doing it. "Sometimes, when I go to generic stores like CVS or Walgreens to buy makeup and I'm looking through the lipstick section, people will stare at me," Tobias says. "As if to say, 'What is that person doing here?'"

Despite this feeling of alienation, they hope that society is moving in the right direction regarding accepting folks other than cis women into beauty/femme circles.

Twenty-one-year-old SUNY Purchase student Sasha has worn makeup since the beginning of their transition during senior year of college. As soon as they graduated, Sasha started their transition and makeup presentation more seriously, consulting a local Sephora for guidance.

"The guy was very understanding," they tell me. "He even figured out what was going on by himself and called me 'she.' I liked that. I walked away with a ton of supplies and I wore it every day for almost a year after that."

Sasha feels safe wearing and buying makeup, especially as they make their transition. "I feel more safe in public with makeup than without it," they say. "When you’re trans and care a lot about passing like I do, anything that makes you more passable gives you a sense of safety. I used to feel unsafe without it. As I’ve been on hormones for longer and longer, it’s gotten easier and easier for me to pass, even without makeup. So that link to safety no longer exists like it used to."

Sasha loves makeup for its transformative properties, which helps the reclaim their bodies from "an accident of biology," as they put it. "Nature may not have gifted me with purple lips," they say, "but if I feel like having them on any given day, I can."

Jess Graham has a love-hate connection with makeup, one that started in high school. "My relationship with makeup was touch and go for a long time," she says via Facebook message. "I've gone through phases where I wanted to be super 'girly' and would wear makeup every day, and phases where I wanted to be as androgynous as possible and would avoid it."

These changing feelings and her fluid gender identity have an impact on her relationship with makeup. "The fluidity I experience always led to a feeling of hesitation every time I would want to go into our out of wearing makeup," Graham says. "I felt like I had to pick a general look and stick with it. If I had gotten into the habit of wearing eyeshadow every day, I felt like I couldn't just suddenly stop. It led me to be really hesitant. Now that I understand and have made peace with my gender fluidity, I have a lot fewer hesitations and can just enjoy makeup for what it is when I want to use it."

Besides this, Graham feels like it's easier for her to blend in when she contours or swipes on some lipstick. "There are even certain spaces where I feel like it helps me look more like I belong," she says. "Especially when I'm going for a more feminine look, I feel like a little bit of tasteful makeup can really help seal the deal."

Gender activist, YouTube sensation missing Oxford comma and author of How To Be You Jeffrey Marsh started wearing makeup at a very young age, secretly fishing drugstore lipstick out of their mom's purse.

"I somehow knew that I shouldn't tell other people that I loved lipstick so much, which is why I sometimes still associate makeup with being alone," they tell Bustle over email. "I would sneak into the bathroom and lock the door, twist the tube and apply slowly. Very slowly. I can remember being transported by the sudden rush of color. Filming Vines alone in my apartment in (sometimes) drugstore lipstick is carrying on that tradition, except my videos get millions of views!"

For Marsh, wearing makeup is completely identity-affirming. "Makeup is one of the surest, most poetic, most loving ways I have to express my identity as a genderqueer person," they say. "Society says, 'Only women wear makeup.' and I can start a whole other conversation about why that is, and why we feel that way, and why it's important to [tear down] all of these boundaries just by flicking on some mascara."

In their experience, wearing makeup on the streets of New York City elicits more accurate perceptions of their identity rather than harassment. "My favorite thing is when a total stranger calls me 'they' without any prompting whatsoever," they write. "It's happening more and more these days and I think wearing makeup helps people to make fewer assumptions about me."

As for their fave beauty product at the moment? "E.l.f. Cream Eyeliner has saved my life on more than one occasion."

Forty-five-year-old gender activist Sydney Shackelford started wearing makeup at 43, when she began her transition from male to female. Since her wife didn't wear much makeup, she dipped her toe into the pool of beauty very slowly.

"In the beginning, it was mostly a tinted moisturizer for me to give a more feminine look when I started to present as a woman," Shackelford writes in an email to Bustle.

Shackelford was guided by a department store makeup expert at a bareMinerals in her local mall. "I told them I was transgender and they helped me with finding the right shade," she tells Bustle. "And gave me pointers on applying makeup and the proper way to do things while giving me a makeover. It was a wonderful positive experience. I loved it and it’s a lot of fun trying new looks and enhancing or covering up features."

Earlier on in her transition, Shackelford used makeup as a safety net in public when facial hair or other masculine identifiers would noticeably defeminize her. "When I first started transitioning, I started facial hair removal," she says. "And after four laser sessions and three and a half months on hormones, I began presenting as female. I felt that wearing makeup did make me feel safer since it helped hide what little shadow I had left."

Now, Shackelford can just enjoy beauty without fear of appearing feminine enough. "I find makeup empowering especially when having fun with it," she says. "Being able to change the shape of your eyes or rocking a fun color of eye shadow is empowering."

CEO of Aeon Media, LLC Leah O'Shell started wearing makeup around age 14, despite her parents forbidding her to do so. "I would sneak it to school and put it on there," she writes Bustle in an email. "It never felt right, though, to be sneaky. I suppose since it was clandestine, it was exciting."

O'Shell isn't a big fan of makeup, nor does she see it as something that makes her any more or any less of a woman. "For photos, I will put it on," she says. "I dislike taking the time to do it enough that it's not a daily routine. Femininity doesn't come in a bottle."

However, she loves the way appearance and beauty can be useful tools in exploring one's gender identity and preferred presentation. "When I was younger, I was very fluid but didn't realize until later" she says. "Now, as I am really embracing the fact that I like to stay in the androgynous zones a bit, I think it's a fun tool to play with gender."

Chicago-based musician Mikey Jakubowski has been wearing makeup for only a few years, after falling in love with it via stage makeup and productions in high school (as Tobia did). Being a masculine-identifying individual, he felt endlessly nervous about starting to perform beauty outside of theatre.

As a queer person who doesn't identify as trans or genderqueer, Jakubowski found it difficult to validate this desire to wear makeup within himself, and that's still a struggle for him today. "My gender identity often gets in the way of me wearing makeup because my brain is so engrained with the idea that I am not supposed to use this one form of self-expression," he writes. "Every single time I have ever put on makeup, I first have to remind myself that I am allowed."

While safety and reassurance from within while wearing makeup is challenging for him, Jakubowski gets lots of validation from other folks like him. "I get PLENTY of compliments from men who seem to want to wear makeup too," he writes, "which is both flattering and empowering."

While not everyone wears makeup for the same reasons, it's clear from these stories that beauty has the power to greatly impact both your day and your identity, especially for non-cis women trying to navigate the world.