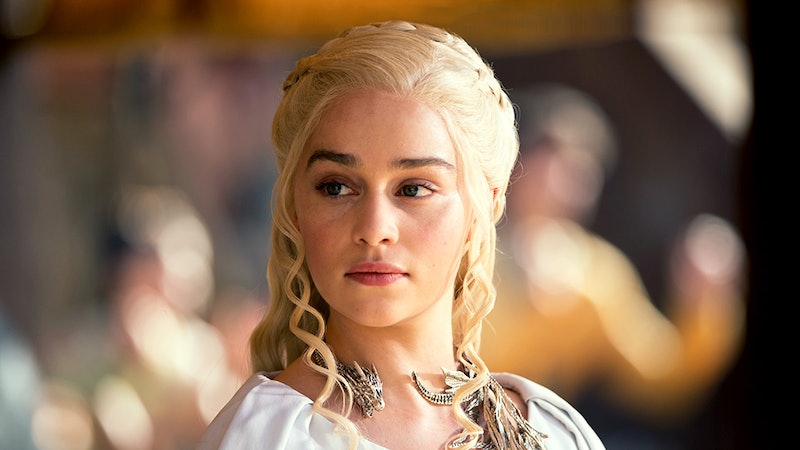 On Sunday, HBO debuted the Season 6 premiere of Game of Thrones , and the series did not give us an alive Jon Snow. But, the premiere did feature answers to some of the other big Season 5 cliffhangers, like what the Dothraki army wanted from Daenerys. The short answer? The Dothraki, in particular, the Khal, wanted to rape Daenerys. I was cringing at the possibility of another rape on the show, but fortunately that thought was abandoned when the Khal found out that Dany was Khal Drogo's widow. Apparently, it's against Dothraki law to sleep with another Khal's wife. And, as glad as I am that Dany isn't going to be raped by her new captors, I'm not so thrilled at the reason why. It's so disappointing that the only thing keeping her from being violated is the fact that she "belongs" to another man.

During the premiere, before Dany's captors found out who she was, they talked explicitly about what they wanted to do to her. A pair of men mused about the color of her pubic hair and talked graphically about the positions in which they planned to rape her. Once she was brought to the Khal, he sized her up like he was looking at a slab of meat. All the men talked about Dany like she was nothing more than a plaything for their pleasure, impervious to the fact that she was right there and could understand them. Still, Dany was strong.

The Khal should have let Dany go after she stood up to him with a textbook, powerful Dany speech (or they could have not captured her at all, but Game of Thrones is a cruel world). Her words were powerful and fearless and the Khal should have respected that — her freedom from rape shouldn't have had anything to do with who her husband was. Sadly, the Dothraki seem to exist in a realm in which a woman is only as good as her male companion, and the Khal only saw Dany as Khal Drogo's widow.

Sure, the Dothraki's decision could be explained away as a mere plot in a fictional story, but the idea that belonging to a man is the only way a woman is protected from violation is sadly a very real problem.

I know from personal experience that a woman is much less likely to get catcalled on the street when she's walking with a man than she is when she's walking alone, and relentless pursuers in bars and other social settings can often only be stopped if they hear that the woman they're after has a boyfriend or husband. Oftentimes, men are more responsive to the mark of another man than they are the woman they're speaking to, and though the Dothraki are after something much more violent, their attitude towards possession of a woman is along those lines. Having someone "own" a woman is what keeps her safe, not, you know, the fact that she's a human being and deserves respect.