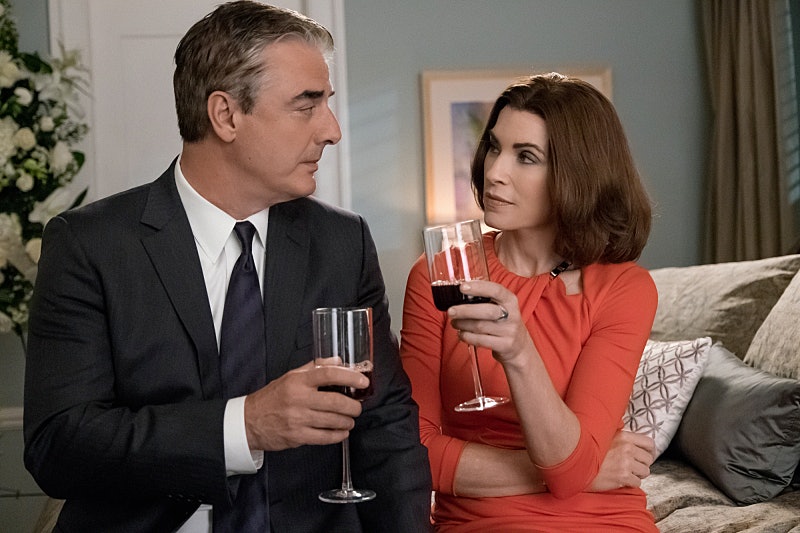 The case against Peter became far more clear on Sunday night's episode of The Good Wife as Jason's investigation continued. While Peter, Alicia and Eli were gathered at Alicia's apartment to celebrate the marriage of Peter's mother and Howard in "Party," Jason was out questioning the crime lab technicians involved in the case Peter is being accused of throwing. And, while Jason might have discovered information that helps prove Peter is innocent, it might not matter. Alicia might have to turn on Peter on The Good Wife , at least, according to Louis Canning.

First things first, here's what Jason found out about the case against Peter. After talking to the lab technicians, Jason learned that Peter personally visited the crime scene and watched the lab techs collect blood samples for evidence, which he later informed the lab he would not be using in court. He was also the last person to sign for the bullets in evidence, which later went missing. When confronted, Peter insisted that he did all that to ensure the integrity of the case, not throw it for a bribe. It turns out, Peter might be telling the truth. The lab tech had a history of botching evidence, and Peter maintains that he saw her walk through the blood at the crime scene, contaminating the samples. As for the bullets, Peter said that he gave them to ballistics expert, and Diane Lockhart's husband, Kurt McVeigh, suggesting that he lost the bullets, not the Governor. So, maybe Peter isn't so guilty after all?

Well, hold that thought, because things just got a bit more complicated. Jason's investigation has former prosecutors who worked with Peter at the time of the botched case scared that they could be scapegoats should the case go south, Cary included. Looking for legal protection, Cary hired Louis Canning, who then called Alicia and told her this little nugget: she might want to consider giving Peter up on the stand. Why, you ask? Well, since she already gave up spousal privilege at the Grand Jury, she could be asked to testify in court. And, given her social interactions with Lloyd Garber — he was, after all, one of Peter's top donors — the prosecution could end up pinning it all on her!

Alicia hung up on Canning right away, and then shared a toast to her divorce with Peter, so the odds of her turning on him seem pretty slim. Still, who knows what she might do when faced with an impossible choice?