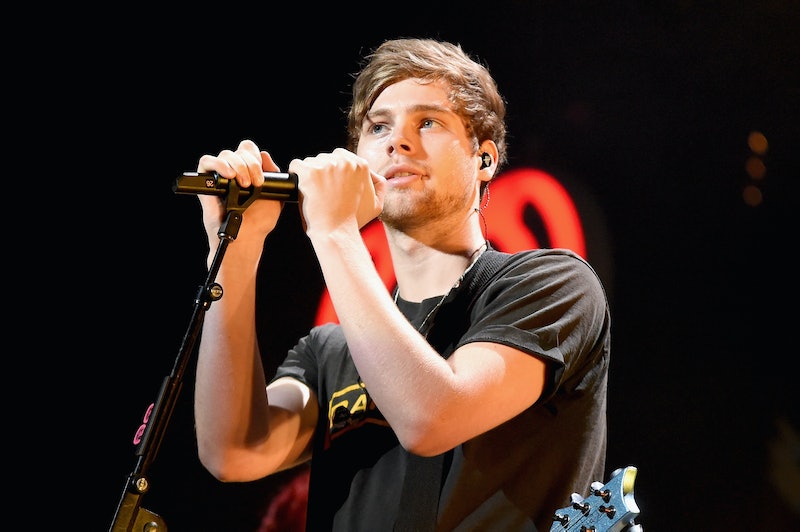 It's common knowledge by now that the 5 Seconds of Summer fandom hates Luke Hemmings' girlfriend, Arzaylea — and that's putting it mildly. While it makes sense that fans would be jealous of any band girlfriend, it seems like there's extra special kind of hatred reserved for Arzaylea (for a laundry list of reasons you can read about here). Arzaylea herself is well-aware of fans' opinions (I would assume that being hate-tweeted all day long gives you a pretty good idea of where you stand within the fandom), but guys, it's not as if Hemmings is in the dark here. In fact, it seems the 5SOS frontman has made it abundantly clear that he's tired of the negativity surrounding his relationship, allegedly messaging a fan and telling her to knock off the hate and later tweeting about how "people need to relax." Simply put: Luke Hemmings is tired of fans hating on his relationship with Arzaylea, and he is speaking out about it.

Bustle has reached out to a rep for Hemmings regarding the alleged message, but has not yet heard back.

A fan on Twitter, who spent a better portion of Sunday night tweeting some, uh, strongly worded anti-#Larzaylea messages, claims Hemmings DMed her and sent her a series of messages (alleged screenshot here) allegedly telling her to "stop being so rude," letting her know what she is saying is "super offensive," and allegedly calling her an "awful human being." If Hemmings did, in fact, DM the fan, it's likely that he did so after seeing her tweets, which included things like "pls call 1-800-help-free-luke to get luke hemmings out of this f*cking ugly ass relationship that is larzaylea." It's also worth noting that in the alleged screenshot the fan alleges that it is actually Arzaylea messaging her.

A cryptic tweet without any context, sure, but in the wake of these allegations, it seems possible that this tweet was a message to fans to stop hating on his relationship and his girlfriend. (Another possibility: It was in response to a journalist who tweeted about how 5SOS refused to stop to take pictures with a disabled fan, though Ashton Irwin was on that one pretty quickly.)

Though the guys typically don't engage in ~fandom drama~ on Twitter, this is not the first time that Hemmings has subtweeted about the fan response to Arzaylea, tweeting back in September:

In October, he spoke to Rolling Stone about the difficulty of being in a relationship at this level of fame and with such a passionate fan base.

"It's hard," he told the magazine at the time. "One of the weird things is you want it to be a secret, but you don't want it to be a secret." And one of the reasons he probably wanted to keep it a secret is exactly this — he knew his girlfriend would be the subject of intense scrutiny and hatred, and really, who wants to send a loved one to walk such a plank?

At the end of the day, it is clear that the 5SOS singer is happy with his girlfriend, and if the relentless vitriol from the fandom doesn't stop, it will only drive a wedge in that symbiotic fan-artist relationship that every fan wants. And look, I get some of the backlash: It's hard to see the object of your affection in a relationship with someone who isn't you. But I think it's easy to forget that at the other end of repeated and relentless hate tweets are people, human beings, who are reading those messages and are profoundly affected by them.

I could see why Hemmings would feel at the end of his rope and why he might lash out at a rude fan. The kind of intense hatred for someone, who is not a public figure herself and who none of us actually know on a personal level must feel excessive, hurtful, and tiring. It must be endlessly frustrating to constantly be tweeted, 24 hours a day, why exactly it is that your relationship is wrong and how horrible your girlfriend is and why you must leave her — especially from people who do not know the whole situation and are supposed to be your supporters. This is not to say that the fandom should blindly agree with everything the band is doing (God knows that Rolling Stone interview was problematic), but the cruel bullying and seemingly endless hatred needs to stop. It is just wasted energy, unfounded opinions, and it is never, ever going to give fans the satisfaction (or results) that they want. The fact of the matter is that Hemmings is blissfully happy in his relationship with Arzaylea — and it's time that the fan base lets them enjoy it.