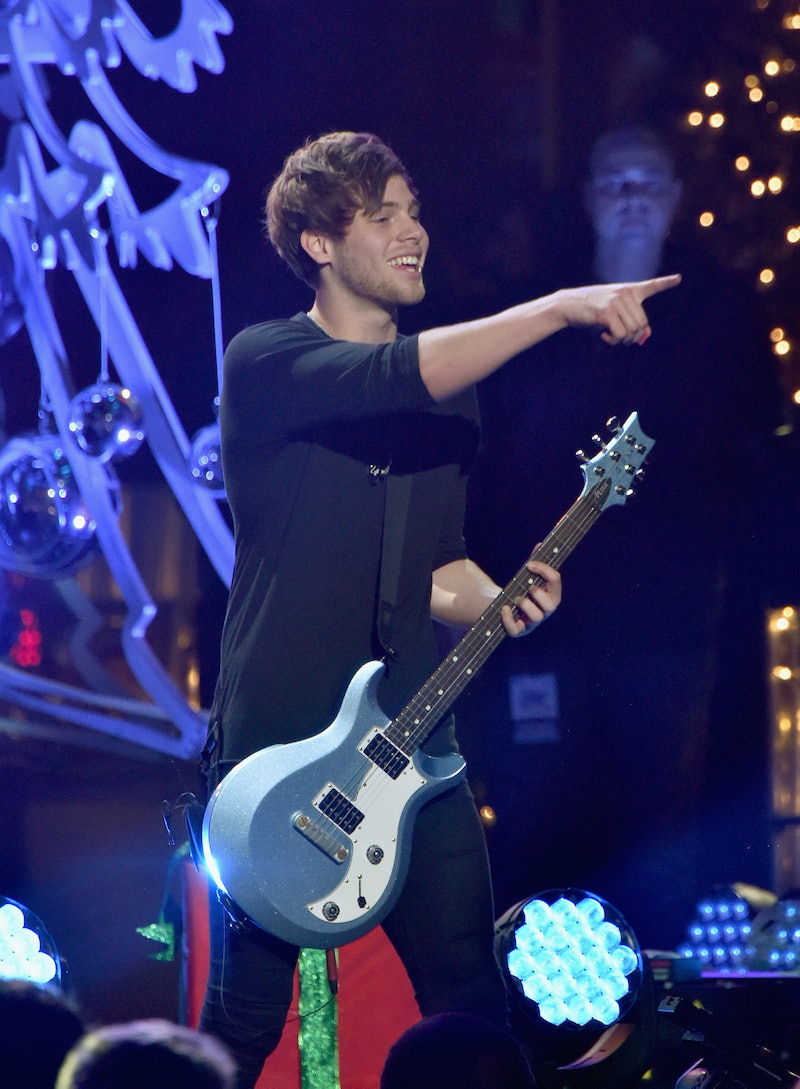 Within the 5 Seconds of Summer fandom, Luke Hemmings' girlfriend Arzaylea can be a polarizing figure. While it's a given that any band girlfriend is going to be subjected to intense scrutiny and serious jealousy, Arzaylea has received the kind of relentless hate that isn't directed at Ashton Irwin's girlfriend Bryana Holly. What's the difference? While there are definitely fans who support Hemmings and Arzaylea's relationship, many feel that she's not a good match for the 5SOS frontman, the youngest in the band, due to rumors that include "she is fame hungry; she's a gold-digger; she's actually 25; she has leaked pictures and texts to fans; she is selling info about the band to tabloids; she intentionally flaunts her relationship with Luke to hurt his fans," as Broadly sums up in their interview with Arzaylea, noting that she denies them all. But despite any disapproval or backlash from the fan base, it's pretty clear that Hemmings is super happy with Arzaylea — and this is just one relationship that fans are going to have to come to terms with.

Truth be told, pretty much every time Hemmings and Arzaylea share a public moment together, it's all kinds of adorable. Whether they're sharing a smooch on Instagram or holding hands in public, it's clear that the guitarist-singer is smitten with his lady. So instead of fighting against it (and trust me, I get it!), let's instead take a moment to celebrate Hemmings and Arzaylea's sweetest moments.

The first ~official~ confirmation that Hemmings and Arzaylea were an item. And irrefutable proof that the two look adorable while kissing.

Look at how he looks at her!

3. When They Met At Kylie Jenner's Birthday Party & Bonded Over Music

Apparently the party was "really bad," but according to that infamous Rolling Stone interview with the band, "Hemmings was impressed when she told him her favorite band was an Arizona emo group the Maine."

4. When They Were Just A Normal Couple Fighting About Emojis

5. Whenever They Hold Hands, Really

Is it just me or are these guys always holding hands?

And we all had video evidence of what it is like to be in a relationship with Luke.

7. When Arzaylea Wore His Shirt

Far from the first time, TBH.

8. When They Went To The Zoo Together

And took selfies with the animals, of course.

9. And This Moment, Because It Make Luke Do This:

This is the kind of Snapchat that is meant to be played in a loop for all eternity.

At the end of the day, some fans may not agree with the relationship or find fault with Arzaylea, but it's clear that she's making Hemmings pretty happy — and that's something, no matter how distressing or difficult it may be, that fans should want for their idols.

More like this
Hilary Duff's Husband Matthew Koma Has Her Name Tattooed On His Butt
By Jake Viswanath and Stephanie Downs
"Lavender Haze" Star Laith Ashley Breaks Down Filming With Taylor Swift
By Jake Viswanath
Twitter Is In Awe Of Taylor Swift’s “Lavender Haze” Music Video
By Jake Viswanath
Twitter Wants To Dance With Anne Hathaway At Paris Fashion Week
By Alyssa Lapid
Get Even More From Bustle — Sign Up For The Newsletter
From hair trends to relationship advice, our daily newsletter has everything you need to sound like a person who’s on TikTok, even if you aren’t.