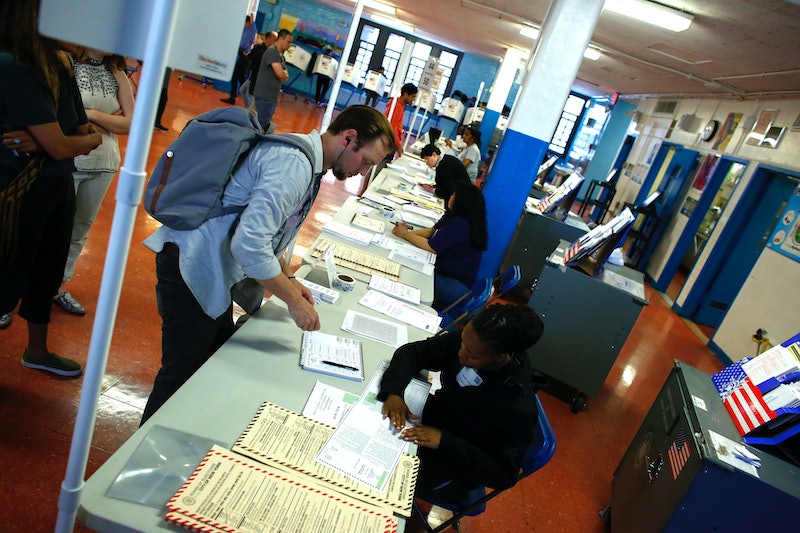 Although Rhode Island has just a little more than 1 million residents, its voters' voices matter, especially in this year's presidential primary. However, after an announcement from the state's Board of Elections revealing a reduction in polling locations, it became clear that something was different with the Ocean State primary voting process. So why is Rhode Island closing its primary polls? The state's voters might not have access to their usual polling location on the April 26 primary.

This year, the Rhode Island Board of Elections has decided to only open 144 of its 419 polling centers throughout the state, according to WPRI news. That means nearly two-thirds of the state's regular polling locations will be closed to voters on the ever-important Acela Primary. The board's director of elections, Robert Rapoza, told WPRI news that they made a similar cut to the polls in the state's March 2008 presidential primary. However, that same year, Rhode Island had a record voter turnout and voter primary participation grew 52 percent in just four years, between 2008 and 2012.

By closing 67 percent of its polling locations so soon before the primary, many voters could be misinformed of their new polling centers, which could make it more difficult for residents to vote for their favorite presidential candidate.

If voter turnout continues to grow this year, the lack of polling locations will likely have a negative impact on the Rhode Islanders' voting experience. For instance, longer lines and understaffed polling places could prevent some people from voting if they are stuck waiting in line or don't make it to one of the 144 polls by the 8 p.m. ET deadline.

Take the town of Cumberland as an example — the town of more than 33,000 has typically had 13 polling locations, but this year it will only have three. This means 77 percent of Cumberland's polls will have closed to voters in the Acela Primary. Another way to think about this cut is that if every Cumberland resident participated in the primary (though it's unlikely), that would leave roughly one polling center for every 11,000 voters. Think about that line of people waiting to cast their vote!

Common Cause Rhode Island, a nonpartisan organization that works to ensure honest and effective government processes, has argued that the Board of Election's decision to close 67 percent of its polling centers will negatively affect voters. “I don’t think enough has been done to make sure voters know that they likely won’t be casting their ballot at the same location as they did in November of 2014,” John Marion, executive director of Common Cause Rhode Island, told WPRI News. Marion also recommended that Rhode Island voters look at a sample ballot ahead of time, since voters will be tasked with voting for presidential candidates and local delegates at the primary.

Despite these concerns, Rapoza told WPRI News that the city has been preparing for the lower number of polling centers by hiring more poll workers to speed up anticipated lines. However, the Board of Elections Executive Director Robert Kando is currently suspended until May 2 because of alleged job performance issues, WPRI reported, which means the state's Board of Elections will be operating without a permanent leader during the crucial primary contest.

The Rhode Island primary matters because candidates on both sides of the aisle desperately want (and need) to win as many of the state's delegates possible. Bernie Sanders has been trailing behind Hillary Clinton in delegate count — Sanders has 1,191 to Clinton's 1,941 (with superdelegates) — but so far, it's been clear that Rhode Island loves Sanders. Although Sanders led Clinton by only four points in pre-primary polls, he could really use every vote he can get in the April 26 primary. If, as Marion was concerned, Rhode Island voters are unaware of their primary polling locations, many could be barred from participating in the contest, and Sanders' chance of winning the Ocean State could be ruined.

But it's not too late to be an informed voter. If you live in Rhode Island, you can confirm your polling place online to avoid confusion on voting day and to participate in this year's Acela Primary.