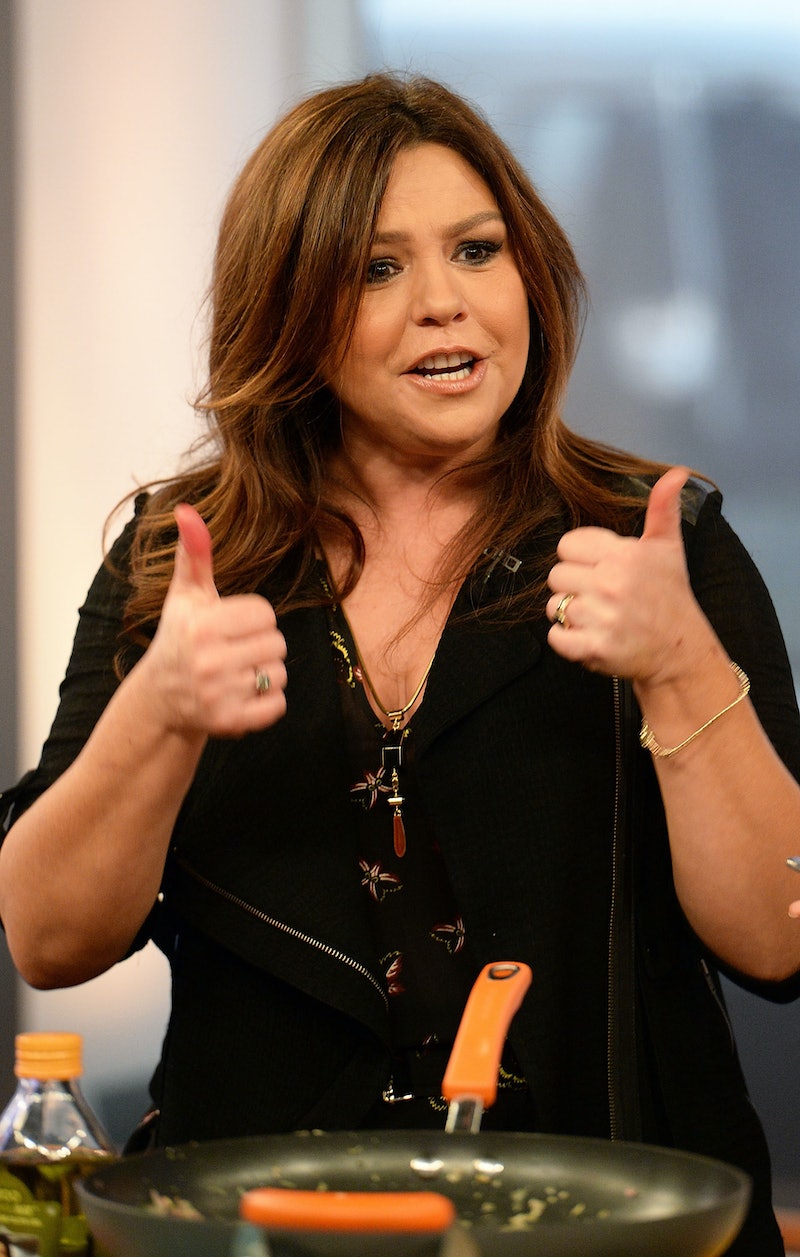 It is difficult for me to imagine anyone getting mad at Rachael Ray about anything. She's literally the happiest and most positive woman on television, and just wants to share delicious recipes with us. But, when Beyoncé released her album Lemonade , fans began to speculate about the identity of the woman behind the lyric "Becky with the good hair" from the track "Sorry." Soon after, fashion designer Rachel Roy stepped into the spotlight with a photo on her Instagram, including a caption about her "good hair," and people began confusing Rachel Roy with Rachael Ray. Beyoncé's BeyHive swarmed the wrong Rach(a)el, and now, the Rachael Ray Show has responded to the mix up in a clever and hilarious way.

Just picture Ray minding her own business, probably baking a pie, when all of her social media accounts blew up with lemon and bee emojis. While I don't condone this sort of bullying, I can't help but giggle at the fact that all of these very confused fans are attacking a happy-go-lucky chef who is just an innocent bystander in all of this drama. She probably had no idea what lead to this, and while Ray herself hasn't acknowledged the situation on her personal Instagram, the Rachael Ray Show account threw a little gem out there, seemingly to joke about the situation:

There is probably nothing better that they could have said in response to all of this nonsense. The only thing I could think of is maybe just having an entire week of lemon recipes dedicated to the BeyHive or as some fans have mentioned, have Beyoncé go on the Rachael Ray Show to have a little fun with it all.

Can't you imagine Beyoncé sitting at the table with Ray and drinking some freshly made lemonade while singing the lyrics to "Love Drought": " If I wasn’t me, would you still feel me? / Like on my worst day? Or am I not thirsty enough?" I can already see the meme spreading across the Internet.

On the other side of things, some fans think that maybe Ray and Roy should combine forces:

It is unfortunate that the entire situation needed to reach these heights. We obviously don't know the real story behind whether Roy really meant to stir up talk with her "good hair" comments or if this alleged cheating scandal involving Beyoncé, husband Jay Z, and Roy is even true at all. We have to remember that while Beyoncé does share a lot in her music, she is also the master of performance, so her line between truth and fiction is very fine. Whatever the case, no one should be bullied in this manner, especially if you are a fan of the artist.

While the tweet above is referencing Beyoncé's epic Super Bowl halftime performance back in 2013, it rings true to the situation today. Based on the Rachael Ray Show's Instagram, I assume Ray and her camp are making light of the drama and making sweet lemonade out of this entire mix up. Literally.

Bustle has reached out to reps for Beyoncé, Jay Z, and Roy regarding the cheating claims, but has not yet heard back.