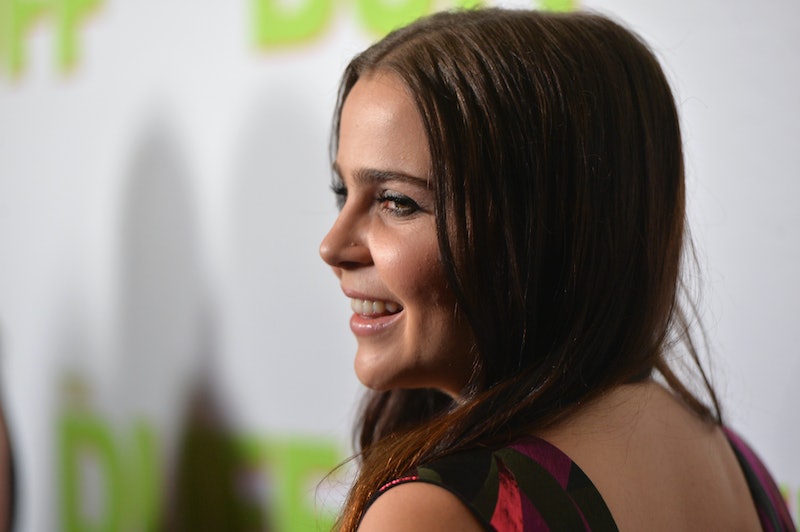 Well, well, well. Just when the Gilmore Girls revival news had quieted down, a fan posts a picture to Twitter and the entire world is buzzing again about what could be in store for the four-episode series on Netflix. On Saturday, a picture of a bike on the set of the Gilmore Girls revival with a license plate that read “BRAVERMAN” was posted to Twitter, and it has me asking all kinds of questions about what role Mae Whitman will play in the revival. Does this picture mean that she will be playing Amber Holt, the character she played on Parenthood for six seasons? Because a direct nod to her role could make Parenthood and Gilmore Girls fans super happy.

Whitman, who played Lauren Graham’s other daughter on Parenthood, is set to make a cameo in the Gilmore Girls revival, but news of what role she will play is being kept mum. TV Line reported in March that Whitman will share “a really fun (albeit small) moment with Graham that will delight Parenthood fans.”

Well, sign me up to be delighted, because as a fan of both Parenthood and Gilmore Girls, I can’t wait to see what role Whitman plays in the revival. But the picture of a bike with a Braverman vanity plate on it has me wondering if Whitman will actually be playing Amber Holt in the revival. I can totally picture it: She shows up in Stars Hollow for a small role — maybe one line, which she exchanges with Graham — and then she pedals off again, into the sunset, her Braverman vanity plate gleaming in the Connecticut sun. It would definitely fulfill all of the details we know so far about her part: Small, delightful, one that fans will love.

But the picture could mean something else as well. After all, the prop looks a lot like Lorelai Gilmore’s bike that she sometimes rode in Gilmore Girls episodes past. Sure, it’s a little less decorated, but could this picture also mean that Lorelai will be making a nod to her Parenthood past? I think it’s definitely possible.

However this bike is ultimately used in the revival, I can’t wait to see Lauren Graham and Mae Whitman on screen together again. It’s been way too long since these talented ladies have shared something with the world.

More like this
The Office Lego Set Includes All Your Favourite Dunder Mifflin Characters
By Sam Ramsden
Here’s How 'House Of The Dragon' Diverges From The Book’s Timeline
By Allyson Johnson
The 'House Of The Dragon' Showrunners Revealed One Key Similarity With 'GoT'
By Grace Wehniainen and Kadin Burnett
Everything To Know About 'And Just Like That...' Season 2
By Jack Irvin
Get Even More From Bustle — Sign Up For The Newsletter