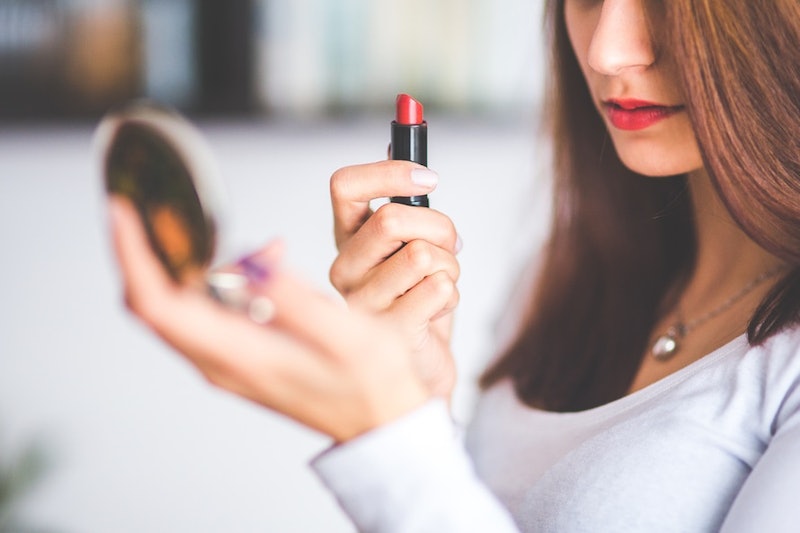 Ever notice how much better life is when you dress up? Maybe it's just me, but I feel way more confident, uplifted, and productive when I actually put a bit of effort into my look. This amazing cause and effect really goes to show that there are style hacks that make you more successful, whether you like it or not.

Because of course everyone prefers a day spent traipsing around in yoga pants. I'm currently rocking leggings and my clogs from 2003, and I am 100 percent com-fy. So yes, I agree there is something to be said for comfort, and occasionally not giving AF. But when it comes to actually stepping out into the world, scoring a date, snagging a job, making a good first impression at work, and/or #winning the game of life, appearance really does matter.

In fact, there is scientific study after scientific study that proves how much appearances mean to humans. You might pretend it doesn't (and it really shouldn't), but on some biological level your boss, professor, and potential partner will make snap judgment that can totally change the course of your life. Scary stuff.

But like I said, style usually has nothing to do with anyone else. It simply feels good to dress up for the sake of dressing up, with new jobs and hot days as a sweet side bonus. So does it sound like time to do a little spring shopping? If so, then keep these style hacks in mind that can make you feel good, and be more successful, in all areas of your life.

Ever feel compelled to take a selfie after applying lipstick? Sure, you may just want to document the rare, fancy occasion. But that bright pop of color may also be boosting your self-esteem. As Mollie Hawkins noted on Cambio.com, "CoverGirl teamed up with Harvard and surveyed 1,000 women about their lipstick habits — and it turns out that gals who rock the red lipstick on a daily basis take an average of three selfies per week, compared to those of us that may opt for the pink or plum hues and post an average of one selfie per week." See? Red lipstick seems to equal confidence.

2. Dress Conservatively To Snag A Job

It may not seem fair, but what you wear to an interview does effect your chances of getting a job. As Laura Sinberg noted on Forbes, "... within the first 10 seconds of meeting your interviewer — otherwise known as the meet-and-greet — that person has decided whether or not you’re right for the job. Those who come across as polished and pulled together are quite simply more likely to be hired than those who are seen as putting in less effort." Sinberg suggested conservative, well-fitting clothes, as they tend to fare best in the "good first impression" market.

3. Slip Into Red To Win All The Sports

Just like red lipstick seems to be linked to winning the game of life, wearing red is linked to a higher probability of winning across a range of sports. As Stephanie Pappas said on LiveScience.com, "... scientists examined one-on-one sports in the 2004 Olympics, including boxing, tae kwon do, Greco-Roman wrestling, and freestyle wrestling. Competitors were randomly assigned red or blue outfits or protective gear. In 16 of 21 rounds, the red-clad athletes won." This probably happens because we evolutionarily view red as more dominant, and thus subconsciously give into anyone wearing the color. Pretty cool, right?

4. Dress Down To Get CEO-Levels Of Respect

Think of the likes of Facebook founder Mark Zuckerberg. Have you ever seen the guy in anything other than T-shirts? (The answer is no.) And yet he's obviously wildly successful and respected in his field. The same also applies to respected, yet incredibly sloppy college professors, as well as CEOs kickin' it in sneakers. Even though these people are being super casual, we still respect the hell out of them. That's because, as Mathew Hutson said in The New Yorker, "recent research demonstrates that when people violate norms, it makes them seem powerful." This could be because "people perceived the nonconformist as having high status and competence, because he seemed to act autonomously," Hutson added. I say this is evidence enough to whip out the sweatpants once you've landed that dream job.

A recent study found that people wearing white lab coats did better on tests than when wearing street clothes. The lab coat trick only worked, however, when subjects were told the coats belonged to doctors. It didn't work so well when they were told (hilariously) that the coats belonged to artists. According to Katherine Bernard on Vogue, "... this study shows if you have a strong cultural association with a garment, wearing it can affect your cognitive processes." So of course you probably aren't going tromp around in a lab coat, but you might consider wearing this awesome leather jacket, or a pair shoes that remind you of your idol. Whatever feels best.

Of course, the right partner will find you beautiful in anything, but it is interesting to look at the science behind attraction. Take this recent French study for example. It revealed that, when it comes to women, men seem to go for the high heeled ladies. Researchers had a 19-year-old woman approach men ages 25 to 50, asking for help with a survey on gender equality. As Alice Park note on Time.com, she garnered the most responses when wearing the highest heels — 83 percent of men she approached agreed to answer her questions, compared to only 47 percent when she wore flats. Similar results were also replicated in a bar setting. Do with that information what you will.

7. Throw On Some Makeup

OK, so whether you love makeup or not, these results may get to you. A 2011 Harvard team paired up with Proctor & Gamble for a study regarding women and their makeup habits. According to Hawkins, "They asked over 100 adults to study the photos of women with heavier makeup versus women with light or no makeup and the overwhelming conclusion was that women who wore dark eye makeup and darker lips were seen as more competent." I love makeup, and I'm still in the camp that thinks women shouldn't have to go to such lengths to appear more component. Duh. But it's interesting all the same.

8. Wear A Skirt For A Good First Impression

This one is a pretty good excuse to go shopping. According to a study in the U.K., people rated women's skirts as far more appealing than pants. The study has 300 participants (females and males aged 14 to 67), to view images of women in various office outfits. As Rina Raphael noted on Today.com, "They then gave feedback based on five factors: confidence, success, trustworthiness, salary, and flexibility. In just three seconds, they were able to determine they far preferred the more feminine options."

9. Dress Up To Think More Abstractly

A new study revealed how formal attire changes people's thought processes, and it's pretty darn interesting. Abraham Rutchick, an author of the study and a professor of psychology at California State University, Northridge, and his co-authors found that wearing clothing that’s more formal than usual makes people think more broadly and holistically, rather than narrowly and about fine-grained details, Joe Pinsker reported for The Atlantic. "In psychological parlance, wearing a suit encourages people to use abstract processing more readily than concrete processing," Pinsker added. So clearly you should work on any and all projects while wearing a tuxedo. (I'm joking, but only slightly.)

10. Wear Your Beloved Black To To Impress Everyone

Besides red, black seems to be the go-to color for achieving your goals. As Cameron Wolf pointed out on Complex, "[A] study surveyed over 1,000 people to find which colors they most associated with certain qualities. Black came out either first or second in every positive category, and also was not thought of very often in terms of negative qualities." Regardless of gender, black was associated with more intelligence and more confidence. This is good news for all us year-round goths.

11. Play Up That Personal Brand While Networking

When it comes to being memorable, choose something that is decidedly you, and wear it always. As Marc Kuchner recommended on Sciblogs.com, it's a good idea to use clothing to help boost your personal brands. People will come to recognize you as the "cool blazer lady," and you'll stand out in their minds. This is great obviously great for networking events, and when meeting new people.

So there you have it — a list of style hacks to make you more successful. Keep in mind, however, that none of this is meant to change your personal style. Always wear what feels best, and by all means stick to your original style. But when it comes to job interviews and the like, remember how a little science can really give your style that extra boost.