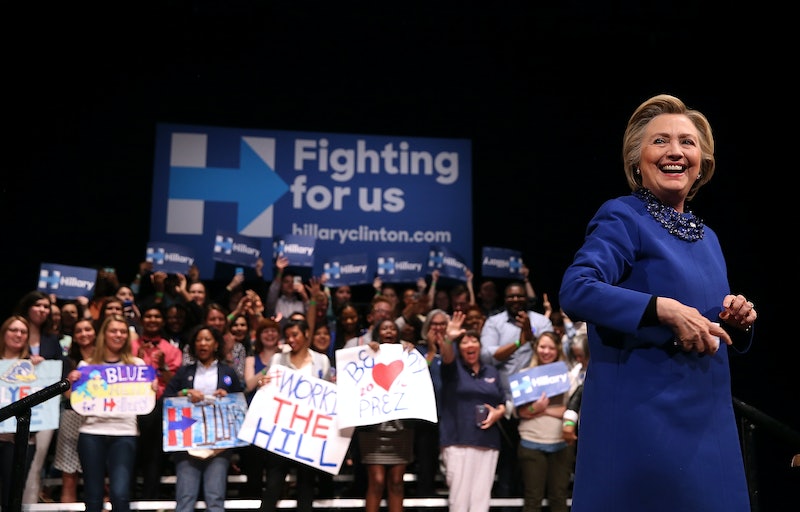 April 26 is expected to be a big day for the Democratic frontrunner. Polls show that former Secretary of State, Hillary Clinton, could win all five "Acela Tuesday" primaries, making it nearly impossible for her opponent, Senator Bernie Sanders, to clinch the presidential nomination. However, while the polls show that it's likely that all five states holding primaries on Tuesday — Pennsylvania, Maryland, Delaware, Rhode Island, and Connecticut — will lean in favor of Clinton and not Sanders, of the five states voting, Clinton won only Pennsylvania and Rhode Island in 2008. (It's important to note that "Acela Tuesday" did not exist in 2008 — the five eastern seaboard states did not all vote on the same day eight years ago.)

Yes, that's right, in 2008, President Obama beat Clinton in the Maryland, Delaware, and Connecticut primaries, and went on to win the Democratic nomination. So what has changed in the last eight years? How can Clinton be expected to win in states that she previously lost?

Well, Clinton's expected victory may not only be due to a change in her popularity over the last eight years, but rather to the huge difference between her opponent in 2008, now President Barack Obama, and her opponent in 2016, Senator Bernie Sanders.

Let's start with Maryland. According to The New York Times, Clinton only won 36 percent of the Maryland vote in 2008, in comparison to Obama's 61 percent victory. However, a Public Policy Polling report released on April 19 shows that Clinton could win 58 percent of the Maryland vote on Tuesday, whereas Sanders is expected to win only 33 percent. According to Public Policy Polling, Clinton's expected Obama-like victory in Maryland is largely due to the fact that Clinton does exponentially better than Sanders in African American communities — nearly 40 percent of Democratic voters in Maryland are African American. In 2008, Clinton did not lead Obama among African Americans, and failed to win Maryland.

Similarly to Maryland, if Clinton wins Delaware, it could also be due to support that she, and not her opponent Sanders, has garnered. According to Delaware Online, the small coastal state tends to support establishment candidates and politicians (Vice President Joe Biden calls Delaware home) — Delaware voted for the victorious presidential candidate in 14 of the last 16 general elections. Sanders has distanced himself from the establishment, which could hurt his chances of winning Delaware.

When it comes to Connecticut, Clinton could beat Sanders because of two factors: Connecticut's closed primary, and gun control. Sanders typically does well with Independents, but Connecticut's primary is closed, which means only Democrats can vote in the Democratic primary. Another reason cited as to why Clinton holds a 51 to 42 percent lead over Sanders in Connecticut has to do with Clinton's support of stringent gun control measures — and Sanders' lack thereof. The Sandy Hook Elementary School shooting took place in Connecticut in 2012, therefore, many of the state's Democrats are likely to support Clinton due to her stronger record on gun control.

Clinton was not the winning candidate in the 2008 Democratic primary, however, voters seem to be backing Clinton over her opponent in 2016. In fact, it's likely that after the April 26 primaries, Clinton's lead over Sanders will continue to grow significantly larger than Obama's lead over Clinton in 2008.