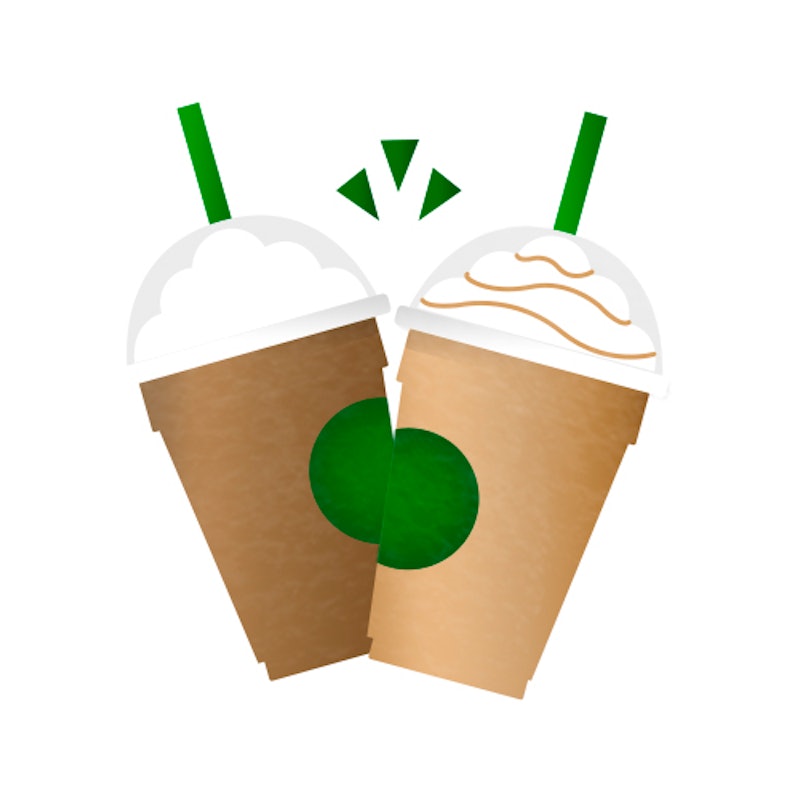 If you are anything like me, you spent a good portion of yesterday texting Frappuccinos to all your favorite people, because surprise! Thanks to the new Starbucks emoji keyboard, that is a thing we can do. But what do all the Starbucks emoji mean? Admittedly most of them are pretty self-explanatory — but just in case you’d like a little help in that area, here’s your guide to all the Frapp-sipping, coffee-infused options currently available to us.

The Starbucks emoji keyboard debuted on Monday, and I don’t think I’m alone in saying that it’s the coffee-themed emoji set java lovers everywhere have been waiting for. It’s free; it’s available for both iOS and Android devices; and it features a unicorn sipping a Frappuccino. What’s not to love? Here's how to get the Starbucks emoji keyboard, and just for good measure, here's how to use it. Because knowledge is power.

Right now, there are 28 different emoji on the keyboard — but it’s worth noting that the emoji set isn’t fixed. According to Starbucks, the keyboard will be updated and refreshed throughout the year, with new emoji periodically appearing… which means that the Starbucks emoji keyboard may not continue to look the way it does right now as time goes on. Just, y'know... something to keep in mind.

Putting together this list was twofold: First, I spent some time puzzling each emoji out on my own; then I went directly to the source (that is, Starbucks) to find out exactly what they're all called. Below, I've divided the emoji into 10 different categories, and within each category, I've bolded their official names.

From left to right, we have the following flavors: Mocha, Caramel, Strawberry, Green Tea, and Vanilla Bean. All very easy to parse. All very delicious.

Worth noting: On the Starbucks menu, those last three are officially called "Strawberries & Creme," "Green Tea Creme," and "Vanilla Bean Creme"; they don't involve coffee, hence the "creme" designation. Also, the Mocha and Caramel emoji have modifiers — you can add or subtract a mocha or caramel drizzle.

On the left, White Cup; on the right, White Cup With Tea Bag. These two may not look terrible exciting, but I like to think of them as being full of possibility. Any number of things could be in those cups: A mocha; a Smoked Butterscotch Latte; green tea; black tea; you name it.

While it's true that these three could be a couple of different things, officially, they are Iced Coffee, Passion Tango Iced Tea, and Peach Green Tea Lemonade. The Iced Coffee emoji has a modifier, too — you can turn it into Iced Coffee With Milk if you like.

I like to call the one on the far left Frappuccino Love, but as far as standard emoji titles go, it’s more accurately described as Frappuccino With Hearts. Then we have Ready-To-Drink Mocha Frappuccino, and lastly, Bubble Frappuccino.

You can either toast your friends’ good health with a Frappuccino Cheers emoji, or with a White Cup Cheers one. Totally your call.

The only food item currently available is definitely worthy of its own entry. Plus, you've got options: Modifiers can turn it into a Birthday Cake Pop (seen here), Chocolate Cake Pop, or Salted Caramel Cake Pop.

From left to right we have the Siren, a Starbucks Store, and a Rewards Star.

Here’s where we start getting into my personal favorites: Classic emoji given a Starbucks twist. The Dancer or Red Dress Woman becomes the Dancer With Frappuccino or Green Dress Woman (although her official name is just Dancer, even on the Starbucks keyboard); the Information Desk Person becomes the Barista Woman and the Barista Man; and Praise Hands become Hands Praising Frappuccino (although, like the Dancer, this one is still officially called Praise Hands). All of them are also compatible with the different skin tone modifiers, too, so that’s super cool.

Like the people emoji, the face emoji all take their cues from the emoji we already know and love; additionally, they’re compatible with all those awesome skin tone modifiers. (And yes, that's "sipface," one word.) From left to right, we have Cat Heart Eyes Sipface, Smiley Tongue Sipface, Smiley Sipface, and Sunglasses Smiley Sipface.

This one gets its own entry, because… well, come on. It’s a unicorn face sipping a Frappuccino. That is spectacular. AND, it’s got its own color modifiers: