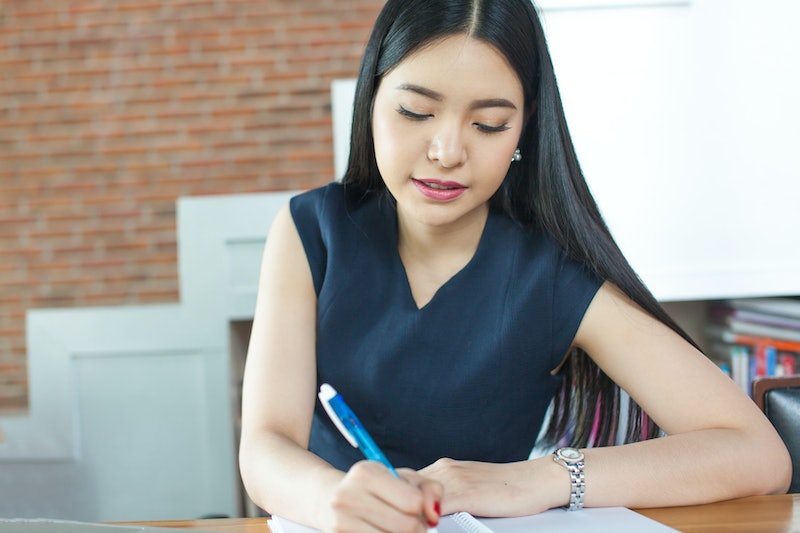 Many feminists are familiar with the guilt that can come from being a "bad feminist" — i.e., one who is not railing against gender norms and combatting inequality 24/7 — especially at work. However, many of the behaviors we feel bad about are things that don't make you a bad feminist in the workplace (or anywhere else, for that matter). While supporting workplace equality is certainly helpful, the burden to rectify gender equality isn't on your shoulders, and if something supposedly "un-feminist" is right for you, you're not wrong for doing it. Gender inequality, like so many issues, is a systemic problem, and it requires change throughout the entire system to solve.

Writer Roxane Gay popularized the idea of a "bad feminist" in her book Bad Feminist: Essays . “Pink is my favorite color. I used to say my favorite color was black to be cool, but it is pink — all shades of pink. If I have an accessory, it is probably pink. I read Vogue, and I’m not doing it ironically, though it might seem that way. I once live-tweeted the September issue,” she writes. Any version of feminism that says you can't do these things, she argues, is not really feminism because it's limiting women's choices rather than broadening them.

There's also no shortage of "bed feminist" behaviors that come up in the workplace. So here are some work-related behaviors that you should feel no shame about, because they definitely don't make you a bad feminist.

The modern-day career woman is supposed to "have it all" and never let her personal life obstruct her career. But that's not always possible for anyone of any gender. If you need to take time off to take care of your family, deal with personal issues, or perform some self-care, you are not beholden to the feminist movement to work as many hours as humanly possible. Men don't have to think about whether taking time off work will set their gender back, and women shouldn't have to either.

Women should be able to work in technology or construction or sports or other professions considered "masculine," but that doesn't mean they have to enter male-dominated fields. Just like men should be able to enter professions traditionally coded in our culture as "feminine," like nursing and teaching, without gender-related backlash, women should as well. In an ideal, gender-equal society, most professions would probably be gender-balanced because people would feel free to do whatever suited them. There wouldn't be zero women in "feminine" industries, because sometimes, that's just what women prefer.

By now, most feminists have heard the advice to "lean in" and be assertive in their workplaces. But many women don't feel comfortable being super outspoken for any number of reasons: they've been taught to be reserved, they naturally are reserved, and more. Beyond that, women are often punished for being assertive. If you tend to apologize more than the average person or state your opinions in a soft-spoken manner and people perceive you as a doormat for that, maybe that's on them — not you. Being polite isn't a crime.

Just as women sometimes criticize other women for talking in a "feminine" way, they sometimes criticize them for dressing in a feminine or traditional way. In both cases, this amounts to victim blaming and shaming. The truth of the matter is, it benefits us to fit the conventions of our workplaces, and if that means wearing makeup and conservative dresses (which someone may wear anyway because they just like them), you can't blame women for making those fashion choices.

5. Looking Up To A Male Boss

Given that leadership positions in workplaces are often dominated by men, it can feel awkward to be a feminist woman working for men. But that doesn't stop any individual male boss from being great. If you're fortunate enough to have a great boss, that's worth celebrating regardless of their gender or yours.

There's a harmful idea especially prevalent in the tech industry that women, especially those working in HR or operations, are the "office moms." These employees are expected to do the emotional labor of keeping the team happy, and when companies are seeking people to perform tasks like greeting people at the front desk and ordering company lunches, they often disproportionately seek out women. If it's an identity being forced on you by someone else, it's a problem; however, if you personally enjoy bringing cookies to your office, or mentoring employees, or anything else "mom-like," that's not oppressive. That's nice. And if someone takes your personal interests as an indication of what they should expect from women in general, that's not your problem.

More like this
How To Fight For Reproductive Rights, Based On How Much Time You Have
By Courtney Young
5 Crystals To Manifest More Money
By Megan McCarty
Sandra Bullock, Girlboss Extraordinaire
By Matt Harkins & Viviana Olen
Experts Say These 23 Things Won't Happen In A Strong Relationship
By Carolyn Steber
Get Even More From Bustle — Sign Up For The Newsletter