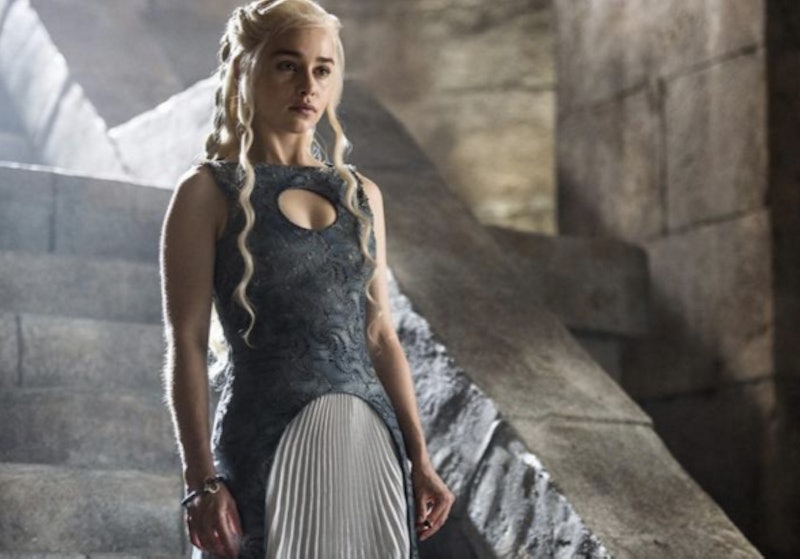 As if finally getting to watch Season 6 of Game Of Thrones wasn't exciting enough, the cast shared something extremely important with the world on Tuesday. In a video posted by Entertainment Weekly, several members of the Games Of Thrones cast discuss the fact that the theme tune to their show doesn't have any lyrics. Because the cast are multi-talented performers, they take it upon themselves to ad-lib some new lyrics for the Game Of Thrones theme tune, and the results are hilarious. Plus, there's some interpretative dance thrown in, because why not? Not only will the video make you wish that the theme tune to your favorite show had lyrics, you'll end up singing the cast's suggestions, because they're catchy as hell.

Sophie Turner, who plays Sansa Stark of course, is the first to share her suggested lyrics. She sings, "There's Ayra, then there's Sansa, then there's... others!" while trying to list as many Game Of Thrones characters as possible. Turner's lyrics are certainly easy to remember, although what happens when a character inevitable gets killed off? Does their name get removed from the theme song? Emilia Clarke is next, reciting her lyrics while she leans against a wall looking totally chill. She says, "Because it's all about the dragons, about the dragons, no men," in reference to the true passion of her character. What's not to love about dragons, right?

Williams is next, and she doesn't disappoint. "Death and death and boobies, death and boobies, death and boobies," she sings, telling us that the lyrics would be repeated right until the end of the song. Williams's lyrics are both super memorable, and totally fitting for the show. Gwendoline Christie wraps up the video by saying, "That was just some interpretative dance, no words." Still, it was some pretty powerful stuff. This is clearly proof that the theme needs lyrics added to it immediately, and here is me begging that the cast performs the lyrics in character. Because as funny as this video is, it can certainly get funnier.