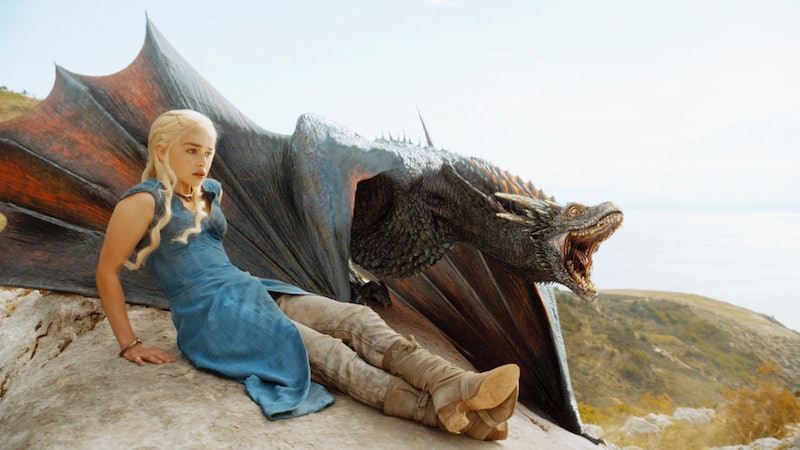 DRAGONS. That's usually what fans say when they get super pumped up about Season 4 of Game of Thrones , which premieres on HBO on April 6. And it's totally understandable — they're freakin' dragons! But here's the thing: What do we even really know about these dragons? That they breathe fire? That they really like Daenerys? That Madonna likes to wear them when she plays dress up? There's so much more to Drogon, Viserion, and Rhaegal than their affinity for meat.

They're basically the most eligible dragons in all of the Seven Kingdoms — okay, they're the only dragons (that we know of) — and we think it's only fair that we delve into their lives a little bit. So it's time to play our own version of The Dating Game with three of GoT's finest "bachelors." After all, even dragons deserve love. (And if someone can make GoT dragon-inspired dipping sauces, then we can play The Dating Game.)

*It should be noted that most of the content in these dating profiles are completely fictional. We can't let George R. R. Martin come up with everything, now can we?

Contestant number one comes all the way from the Dothraki Sea. He's the burliest of the bunch, and he's not one to back down from a challenge.

Do you like to plan your dates?Oh, I definitely like to call the shots. I wouldn't call myself controlling at all, but I like to know what's going on.

Is it important to you that your friends approve of who you date?Not at all. I know my heart will lead me in the right direction.

Our second contestant today is ready to prove why he's the dragon to beat. He might think a little highly of himself at times, but he's sure to defend those he loves.

How important are looks to you?Um, like, not to be an asshole, but looks are incredibly important.

Do you think it's okay to cancel a date if you get a better offer?Okay, I'm not that much of an asshole. That's just uncouth.

Who do you think should pay for the first date?Are you kidding? I'll definitely pay. I don't want them to think that I can't take care of myself.

Our third contestant is the sweetest in the land... well, as far as dragons go. He's a mama's boy at heart, and he'll be the first to share his meat with you.

Would you date someone your parents don't approve of?OMG, never! My mom's the Mother of Dragons, for goodness sake! Plus, what she thinks means everything to me. Everything.

Describe your perfect date.Definitely lots of flowers. You can never have too many flowers. And as a bonus, they taste great when they're a little charred.

Do you want to be in a committed relationship?Only if she's up to my mom's standards.

And there you have it, folks. The best that the Seven Kingdoms has to offer. (But let's be real. Daenerys is never letting her babies go.)