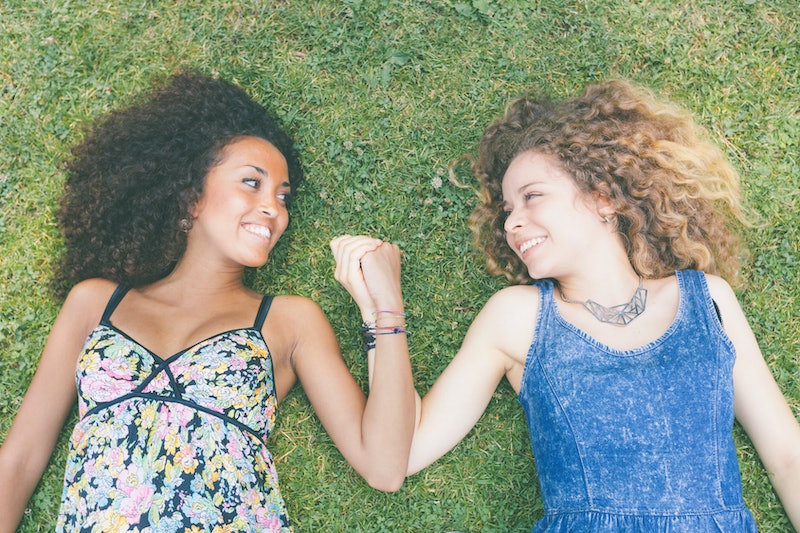 One of the biggest lesbian stereotypes is that of a U-haul lesbian aka ones that move in together way too soon, like after basically not knowing each other at all. You know the old joke, "What does a lesbian bring on the second date?". While most of me wants to scream "WHATEVER THE EFF SHE WANTS! CANDY OR MAYBE YOGURT? I DON'T KNOW SHE'S NOT A STEREOTYPE YOU REDUCTIVE JERK," part of me wonders... do girl-on-girl relationships lead to premature moving vans?

I can say from personal experience, not always. I've been with my girlfriend for eight or nine months, which is like I don't know, 10 years in lesbian years, and we love each other— but we don't live together. We spend a lot of time together, definitely, but we both think it's good for our relationship long-term to take it more slowly. Even though we really liked each other when we first started dating, we only hung out like once a week. We definitely had the instinct or the want to spend a huge amount of time together, but I'm just not the kind of person and neither is she. We both thought it makes more sense to take it slow. Plus, missing each other can be nice.

"Dating should be a slow and natural process," dating coach Monica Parikh tells Bustle. "It requires us to maintain a certain detachment, so we can evaluate the other person. Do we have what it takes to make a long-term, healthy relationship? Can we communicate? Is there chemistry? Are we compatible? When you're detached, you can see the "red flags" that may doom a relationship from the beginning. There is no point overlooking those red flags in a bid for instant intimacy or connection. Usually, the relationship will end badly (and for the very reasons you chose to overlook from the start). It's always better to be in the right relationship, as opposed to any relationship."

But how many people follow this? Is it really that easy to become immediately co-dependent with a partner? And does it happen more with lesbians?

It seems to. And a lot of people seem to think that its roots are in old-school homophobia. The Atlantic explains:

"U-Hauling"— packing up and moving in together after knowing each other for just three months — is perhaps the greatest tradition (and punchline) in lesbian culture. This "urge to merge" had a basis in practicality in the '50s and early '60s, when gay couples had to remain in the shadows. Back then, if you had the good fortune to make a family, you held onto it. It was a marriage. In the lesbian world, serial monogamy was safe, and also fulfilling.

But it's not just something from the past. Although there have been strides in gay rights, heterosexism still exists, and according to Dr. Lauren Costine this heterosexism and "internalised lesbianphobia" are big parts of why lesbians U-haul. She tells After Ellen: "We live in a society that tells all women being in a relationship is one of the, if not the most important life goal. Combine those two factors with low self-esteem caused by internalized lesbianphobia, and you’ve got the U-haul recipe."

It makes sense that we'd cling to a relationship that we finally feel fulfilled in, if we've grown up being told wanting those things are wrong— but that relationships are the be all and end all. It's all a bit of a mindf*ck.

Is There Science Behind It?

It's not all environment. Costine says that there's another, scientific reason behind women merging so quickly. And it has to do with the brain.

Biologically our brains are wired for a relationships and connection. We emit much more Oxytocin than men. Oxytocin is a hormone women emit when they’re falling in love, having sex, or breastfeeding. It’s biological encouragement to attach. It feels so good that for some women, in this case lesbians, they can’t get enough. Since there’s two women, there’s twice as much Oxytocin floating around…

Oxytocin is great— it's what bonds us together. But too much of it just might be a recipe to disaster. Or U-hauling.

So What Can You Do?

Ultimately, every person and every relationship is different. For some people, waiting a few months to move in together feels like long enough. For me, I wouldn't start considering moving in until I'd been with someone at least a year. Like I said, it's not that my girlfriend and I don't have the "urge to merge", it's just balanced with the thinking that it might not be great for us in the long-term. And if we want our relationship to last then, perhaps counterintuitively, we feel it's not the best thing right now.

"I urge people to derive happiness from a variety of sources," Parikh says. "When you get fulfilled from a lot of friendships and relationships, work that fulfills you, and mental growth and physical engagement, you're also much less prone to be needy, critical or demanding of your partner.

The best thing to do is bear in mind what Parikh says, focus on the big questions: "Do we have what it takes to make a long-term, healthy relationship? Can we communicate? Is there chemistry? Are we compatible?" Don't throw it all in for the sake of some immediate, head-rushy intimacy. That'll still be there in a few months.