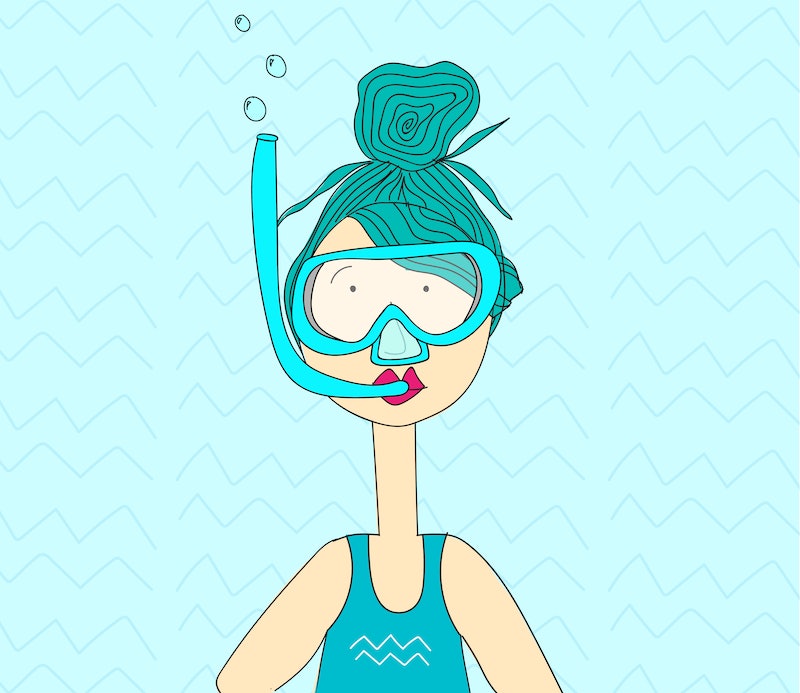 Ahoy, Aquarians. Just thought I'd give you a heads up that on April 28, Mercury will turn retrograde, bringing the total number of planets simultaneously in retrograde up to five. So what does five planets being retrograde mean for Aquarius? Well, let's a take a look. It's OK, you guys — change is good.

Aquarius is the ultimate air sign (despite the fact that their symbol is a person bearing water): Aquarians are fiercely independent; try too hard to control them, and they'll slip through your fingers. They're curious, but they sometimes have a tendency to go a little off-track. They're compassionate, and they value truth and frankness — sometimes too much frankness. Have you ever been outside when the wind starts whipping up, and you're like, "Wow, what a beautiful swirl of leaves all dancing around in the wind!" — and then the wind is like, "Yeah, dude, this is a really powerful gust," and you were like, "Wow, so beautiful," and the wind was like, "Wow, so strong," and then you get trapped in it like a mime in the wind, only with actual wind? Yeah. It's like that.

But despite their independence (or perhaps because of it), Aquarians are not huge fans of change. And with five planets in retrograde, each embodying its own challenges, there's bound to be change. Embrace that change, Aquarians. Soon enough you can go back to being chill and doing what you want and making all of us jealous with your chill independence, don't you worry.

On Jan. 7, Jupiter, the planet of personal growth and expansion, turned retrograde. While feeling stalled out may not bother Aquarians quite as much as it does other, more restless signs, the feeling of being trapped in a routine may freak you guys out. Use this time to think forward and devise a plan with several next steps. And stick to it!

Saturn, the "karma" planet, went retrograde on March 25. It may feel like the work you're putting into something — whether it be a new skill, school, work, personal growth — isn't paying off. Like you're having to work even harder and longer to achieve something that should be coming more easily. Do not give up, Aquarians! Do not flee! This is a test! You'll be OK — working through frustration is an important skill to have.

Mars is the planet of emotions, particularly anger and aggression — not so much the Aquarian thing. Unpredictability, though, is. While it's OK to feel angry and aggressive (and sometimes those feelings can help people increase productivity), don't let them lead you down a path you won't be able to escape from later. Think through your actions.

Aquarians tend to gravitate towards peaceful relationships, and sometimes that puts you in danger of settling for a not-so-healthy situation. With Pluto retrograde, you laidback babes may turn that compassionate eye onto yourselves, and gaining an altered perspective on what really, actually, truly fulfills you. Don't be afraid to rock the boat.

As with all "communicator" signs, Mercury going retrograde can mean a bit of a mess for Aquarius humans, since it's the planet of, um, communication. You Aquarius dudes value honesty, but tend to toe the line between being frank and being hurtful. Keep an eye on that line when Mercury turns retrograde on April 28. You'll thank yourself later.

More like this
How To See The Lunar Eclipse On May 15-16, 2022
By Kaitlyn Wylde
Here's Your Daily Horoscope For May 16, 2022
By Mecca Woods
When Is The Next Full Moon? Your 2022 Calendar
By Nina Kahn
The Meaning Of Angel Number 555, According To Numerologists
By Kristine Fellizar
Get Even More From Bustle — Sign Up For The Newsletter