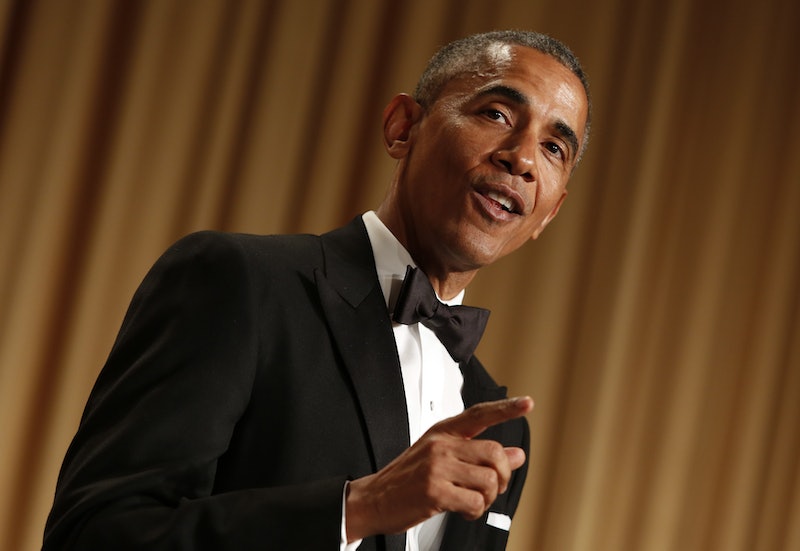 The White House Correspondents' Association — a nonprofit representing the journalists who cover the White House — first founded the dinner as an intimate celebration for its 50 members in 1921. However, over the last 90 years, the event has become a star-studded affair, with arguably more attention paid to celebrity than to journalism. So who are the lucky White House Correspondents' Dinner ticket holders, and how did they score a ticket to see President Obama's top-notch one-liners?

Well, according to The Washington Post, The White House Correspondents' Association sells the dinner tickets — $300 each — to its members. However, most of the members buying tickets are not journalists themselves, but rather news organizations — USA Today, NBC, Bloomberg, The Wall Street Journal, etc. Therefore, it is up to these news outlets to distribute their tickets, and in recent years, the tickets have mostly gone to celebrities and executives, rather than to the organization's reporters.

For the 2016 dinner, The Washington Post reported that news companies are each only allotted seven tables, and so far, it seems as if many of those tables will be filled with celebrities. According to Deadline, ABC has invited the cast of Scandal and Black-ish; Illana Glazer and Abbi Jacobson of Broad City will be seated at the Reuters table; and Kendall Jenner's ticket was provided by USA Today — just to name a few of the A-listers attending the event.

Of course, the news companies will disperse some of the tickets to their journalists who are in fact White House correspondents, but many of the tickets that don't go to celebrities will go to the companies' executives, too. The journalists with the coveted tickets are another way in which celebrities show up at the event — The Washington Post claims that publicists often call up journalists asking them to bring a celebrity guest.

The White House Correspondents' dinner is meant to be a philanthropic event to raise money for the association's college scholarships. However, there has been much controversy around the money raised at the event in recent years — the majority of the profit from the dinner does not go to scholarships — and few attendees pay attention to the awards ceremony.

In fact, due to the controversy over the scholarship money, and annoyance at the prominence of celebrities rather than journalists at the event, some invitees are boycotting the White House Correspondents' Dinner on Saturday.

So, for anyone pining after a ticket to see what very well may be President Obama's final foray into comedy, remember this: The White House Correspondents' Dinner isn't a dinner at the White House. Rather, it's a massive event held in an airport-hanger sized ballroom at the Hilton Hotel — where John Hinkley shot Ronald Reagan.

Not to say that I'd turn down a ticket if anyone's offering...