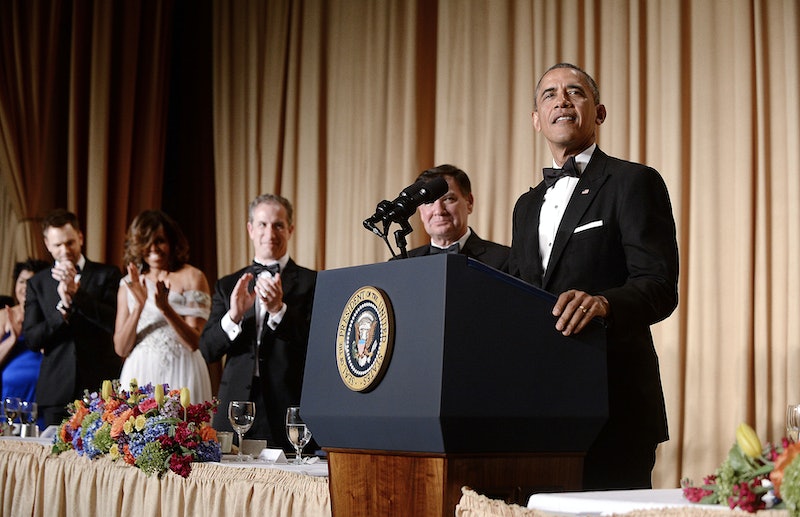 Despite the fact that I've previously railed against the White House Correspondents' Dinner as too extravagant and inappropriate a party to be thrown when the reality of the economic climate and unemployment numbers is probably far worse than we can imagine, there's really only one thing you should be doing with your weekend: watching it. In fact, given that it's the run-up to an election year and we could all use a break from the trove of depressing news and food recalls, watching the White House Correspondents' Dinner is by far the smartest way to spend your Saturday evening, hands down. That, or maybe finding a way to achieve peace in the Middle East. Either one is fine.

The annual event, hosted by the White House Correspondents' Association, acts as one giant red carpet for politicians, Hollywood bigshots, and even pro-athletes to mix and mingle (and hopefully catch a photo with George Clooney), prompting one documentary filmmaker to dub it "Nerd Prom." The event has taken criticism in recent days for its over-the-top parties and irrelevance to the actual world of journalism — but that's just one more reason to tune in and watch the train wreck.

If you're still unconvinced, here are a few more reasons to tune into one of the most amusing nights on television:

Face It: President Obama Is Hilarious

Obama might not have the same comedic timing as the hilarious Chelsea Peretti or the always on-point John Oliver, but he can hold his own, as he's proven several times during his tenure in the White House.

"[The White House Correspondents Dinner] is a safer environment to take on some of those more hot-button issues and deflate them," presidential speechwriter Adam Frankel told CNN in an interview Friday, explaining that the dinner gave Obama more "opportunities for extended riffs and humor" than usual. Of course, nothing can beat his 2011 Lion King style "birth video" or his 2009 barb against House Speaker John Boehner's unusually orange tan: "He's a person of color, but not a color that appears in the natural world." Zing.

Cecily Strong Is The Host We've Been Dreaming Of For 10,000 Years

Not only is the Saturday Night Live comedian and "Weekend Update" host one of the funniest we've seen in a while, she's understanding of what it means to be bipartisan — maybe more so than some actual politicians.

"I don’t want to be too mean where it really hurts somebody," said Strong in a recent interview with Capitol File Magazine . "I’d rather do things we can all laugh [about and] make fun of myself as much as anyone else." Maybe both ends of the political spectrum can learn a thing or two in between their champagne-soaked mingling and flirting with Bradley Cooper.

It's A Guaranteed "Candidate-Free" Zone (Almost)

Conservative candidates tend to avoid the White House Correspondents' Dinner like the plague, and they're probably not wrong to do it either with all of the easy jokes that could be drummed up in their honor. With Yahoo Politics reporting that nine of the current or prospective GOP candidates in Iowa all weekend (John Kasich was the lone holdout), it's probably safe to make jokes at their expense without feeling too badly about it.

The best part of the evening, no matter what anyone says, is the moment the first student is called up for their scholarship award because the children are our future and we should teach them well and let them lead the way, show them all the beauty they possess inside, and give them a sense of pride to make it easier (thanks, Whitney Houston). Also, tuition is horrendous now and they'll probably appreciate the gesture. Bring tissues.

Seriously, they can't do it. But they try so hard.

All The Dirty Laundry Is Aired Right Before Your Eyes

Sure, the White House Correspondents' Dinner is "kind of a mess", as Sirius-XM host Julie Mason told Politico in an interview recently, but it also offers a wide view of which politicians are essentially in it for the celeb-ogling and cover stories, and which ones actually understand why they're there.

"Less so than, Hollywood, I’m more worried about the corporate takeover—or the attempted takeover—of this dinner," USA Today reporter David Jackson told the radio station last year. And he's not wrong: with more and more publications inviting the Hollywood elite (for reasons unknown to most of the population — seriously, Fox News, Brody Jenner?) rather than actual reporters and political dignitaries, it's becoming more and more transparent who actually cares about White House correspondence and who's just in it for the fame and fortune.