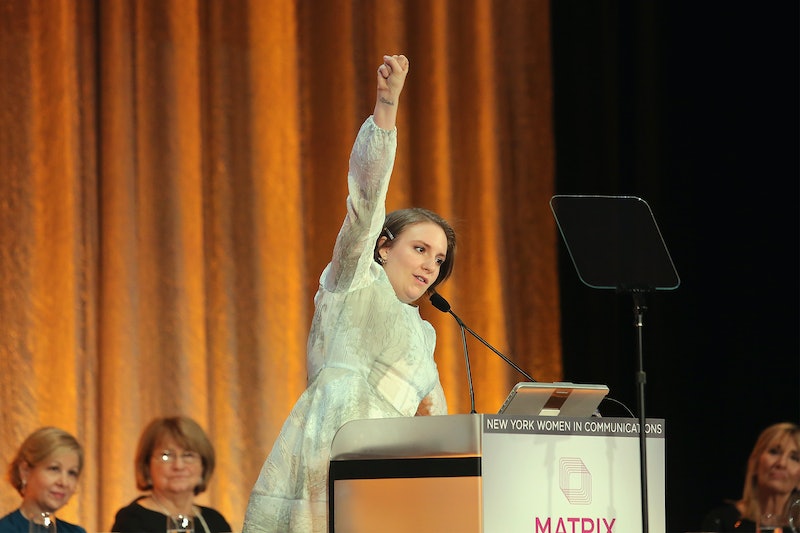 Let me begin by admitting that I've joked about moving to Canada in case Donald Trump wins the election. But am I actually able to trade Dunkin' Donuts for Tim Hortons? No, in part because Dunkin's delicious pastries have my stomach held hostage — and in larger part because moving to a different country is impractical, even near-impossible if you're a student. Some people are able to actually consider the idea, however. At the Matrix Awards on Monday, Lena Dunham said she'd move to Canada in the event of a Trump presidency, with no conditions or qualms: "I know a lot of people have been threatening to do this, but I really will. I know a lovely place in Vancouver, and I can get my work done from there."

Of course, Dunham is hardly the first celebrity to make this Canadian proclamation. Other celebrities have joined the #MakeCanadaAmericaAgain train, speaking out about moving to Canada and exercising their privilege by doing so. Fox News' Fox & Friends reported that everyone from Jon Stewart to Cher to Rosie O'Donnell has said they would flee if Trump became president.

Unsurprisingly, the Donald responded to Dunham with his trademark arrogance, dismissing Dunham as “a B-actor, and has no mojo,” on Fox News' Fox & Friends. He added that getting her and other celebs, like Whoopi Goldberg and Rosie O'Donnell, to leave would be a "great, great thing for our country.”

So many people feel just the same way as Dunham about Trump, but the fact is most can't consider moving to Canada if he wins as a viable alternative. The fact that Dunham can seriously entertain this fancy and proudly proclaims it reek of one thing. Say it with me: Privilege.

Privilege is what allows some people to avoid bearing the consequences that others will have to face—in this case, escaping a Trump presidency. It's what allows Dunham to say she really will move to Canada. Not every American knows a lovely place in Vancouver, and not every American is able to get work done from there. But Dunham does and can, and that's a sign of celebrity (and other) privilege at play.

I find Dunham's statement tone-deaf in a similar way as fellow actress Susan Sarandon's on Trump. (He really doesn't bring out the best in people.) Sarandon drew fire for saying some would consider voting for Trump since he'd "bring the revolution." (Sarandon later clarified that she, herself, would not vote for Trump). The thing is, Trump's campaign is known for touting hateful policies, but as I wrote for Bustle, Sarandon's comments are the words of someone who wouldn't be impacted by the consequences of such vitriol. The people who would are the same people who wouldn't be able to escape to Canada: Americans without the privilege of class, fame, race, or power.

The "moving to Canada" shtick is humorous until you realize that some people joking about it can actually make it a reality, and by doing so are willing to disregard the effects Trump could have on the rest of America.

Using their statuses and platforms, several celebrities have spoken out against Trump in effective ways, such as raising awareness about some of his harmful policies. For example, Latinx celebrities like America Ferrera and Ricky Martin condemned Trump's xenophobic comments on Mexican immigration in op-eds and interviews.

Instead of jetting away to Canada, I think Dunham and others could leverage privilege in more productive ways, like Ferrera and Martin. Escaping the problem isn't a way to solve it. It's not a form of protest, and it's not even that funny to joke about it, either. Dunham and other celebs should think about their less privileged countrymen left behind every time they proclaim they'll head north of the border.