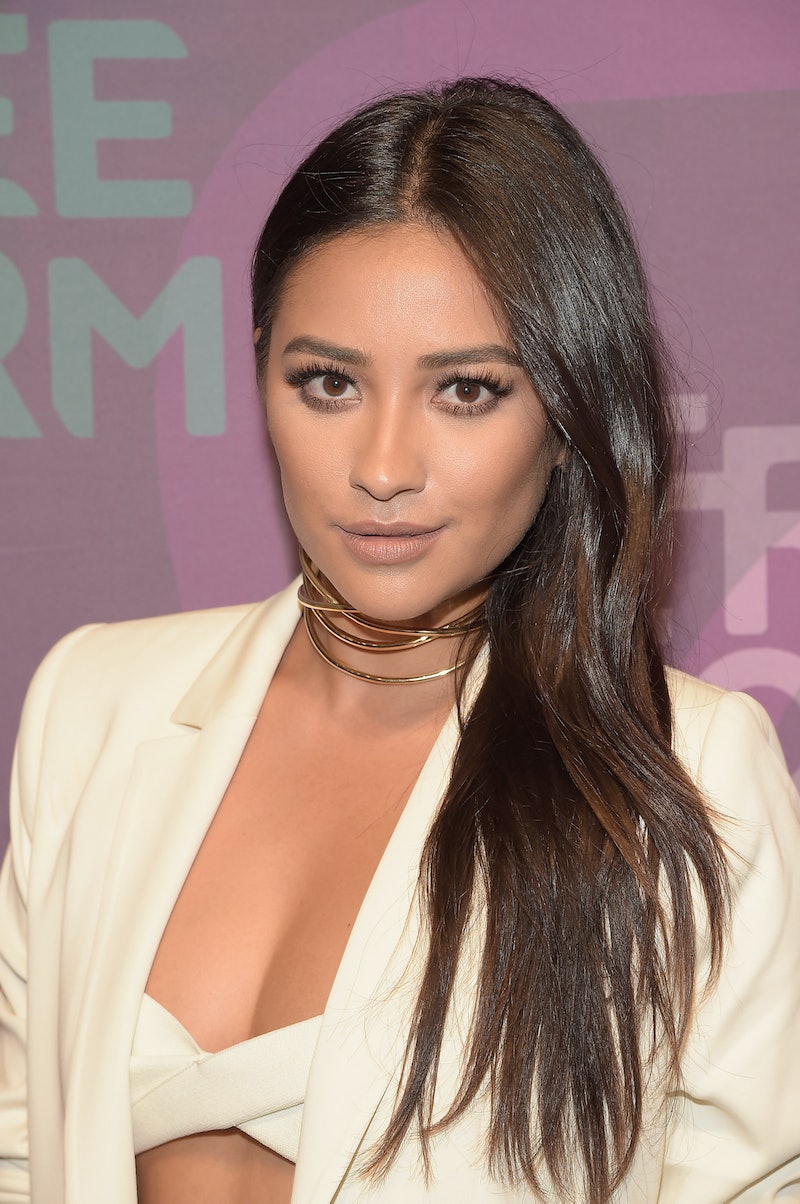 Say what you will about Kylie Jenner's Lip Kits, but there's little doubt that they're not only insanely popular but also a high quality product. While some nay-sayers may cry that it's only her young fans propelling them to success, that's just not true. Shay Mitchell wore Kylie Lip Gloss in the shade Literally, and she looked flawless in the product. While all of Kylie Jenner's critics may try to explain away the success of Kylie Cosmetics by stating that it's only her fans participating in the lip gloss and Lip Kit purchases, it's hard to deny that the products are independently successful when celebs start rocking them.

Seeing Kylie Jenner's lip gloss on a star like Mitchell is particularly notable because, let's be honest, Mitchell's makeup and hair game is strong. Whether she's gracing the screen as Emily Fields on Pretty Little Liars or walking the red carpet with killer lashes, she's an incredible force in the fashion and beauty scene. She is on one of the most stylish shows on television, after all.

When you combine Shay Mitchell and Kylie Jenner, though, you get a killer moment for makeup. During press for Mother's Day and her hosting gig on Live! With Kelly and Michael, Mitchell's makeup artist opted to use Kylie Lip Gloss in the shade Literally, and it was perfect with the actress's stunning bronze smoky eye.

According to Allure , makeup artist Patrick Ta opted not only for the Kylie Lip Gloss but also for super affordable Milani Bella Eyes Gel Powder Eyeshadow. The products ring in around just four dollars! While the bargain can't be beaten, I'm still obsessing over the fact that yet another star rocked a Kylie Jenner product.

Mitchell actually isn't the first to wear a product from Kylie Cosmetics, though. In fact, there have been tons of stars who have chosen to rock not just the lip glosses but also the matte liquid lipsticks. From YouTube stars to models to actresses, Kylie Cosmetics' scope extends to practically everyone.

Looking gorgeous in Kylie Gloss. So great that Kylie Cosmetics even reposted on social.

No one can deny Mary Jo K's power.

If you had a chance to try the latest metal matte, wouldn't you?

It may have taken her a minute to discover Kylie Jenner Lip Kits, but once she did, she got one named after her.

So great it deserved a Kylie Cosmetics Instagram repost.

Now that Shay Mitchell has worn Kylie Lip gloss, it's another star added to the list of celebs that love the product. Kudos to Jenner for her product and big ups to Mitchell and makeup artist Patrick Ta for killer work.

More like this
21 AAPI-Owned Beauty Brands That Will Be Your New Favorites
By Audrey Noble
Half Magic Beauty Is Here With The Euphoria Makeup Of Your Dreams
By Rachel Lapidos
How Sunnies Face Is Championing Filipino Beauty
By Kristin Corpuz
10 Talc-Free Makeup Brands For Safer Eyeshadows, Powders, & More
By Audrey Noble
Get Even More From Bustle — Sign Up For The Newsletter