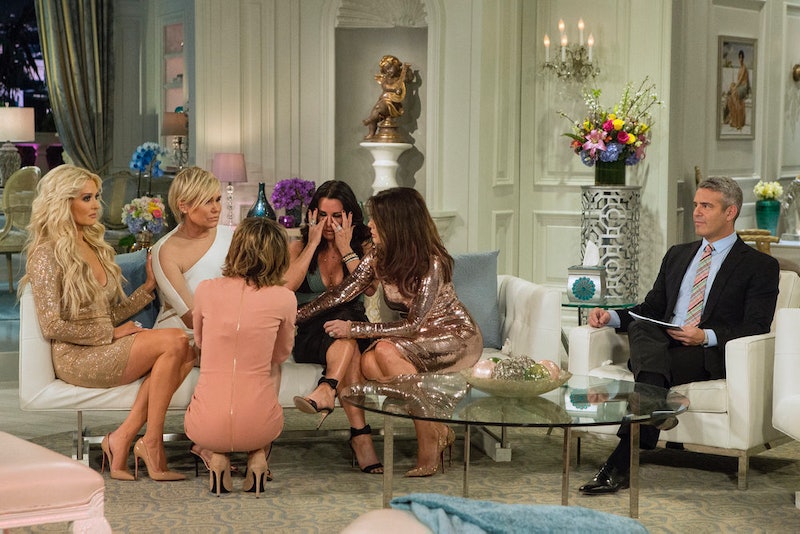 I think we are all ready for the Real Housewives Munchausen train to finally exit the station and never come back. Maybe it could even go careening off a cliff? I can't be the only one that has been waiting for the constant allegations about Yolanda's health to end. This entire season of The Real Housewives Of Beverly Hills has focused almost entirely on who said what about Yolanda having Lyme disease. Well, tonight the universe has given us a gift because Yolanda finally got the apologies that she deserved on Part 2 of the Real Housewives Of Beverly Hills reunion. Hopefully this means that we never have to hear about it again because questioning someone's illness is never OK. On the show, Yolanda has always maintained that she has Lyme disease, and, frankly, it's rude for her co-stars to suggest otherwise.

Tonight was the night that things seemed to boil over during the reunion, when Yolanda became incredibly emotional. They discussed the fact that the ladies had not only questioned Yolanda's illness but had also questioned whether Yolanda's children really had Lyme disease, prompting Yolanda to provide their medical records as proof. At one point, everyone was pointing their manicured fingers at each other when it came to who said what to who about Munchausen. Suddenly, seemingly out of nowhere, Yolanda became extremely emotional and called them all out for even bringing the discussion of her health up at all.

Once Yolanda's tears began to flow, it was like a switch went off and all of the Housewives involved in the gossip suddenly surrounded her and began stroking her hands and apologizing. It was pretty interesting to see these women who were so vehemently denying any wrongdoings only a moment earlier, suddenly on their knees, begging forgiveness. Score one for Yolanda.

Unfortunately, it may be tough for friendships to survive accusations like the ones these women levied at Yolanda and her family. Maybe this whole thing will teach some of them not to openly discuss things that they know nothing about. After all, until you are in someone's shoes, you can't know their true experiences.