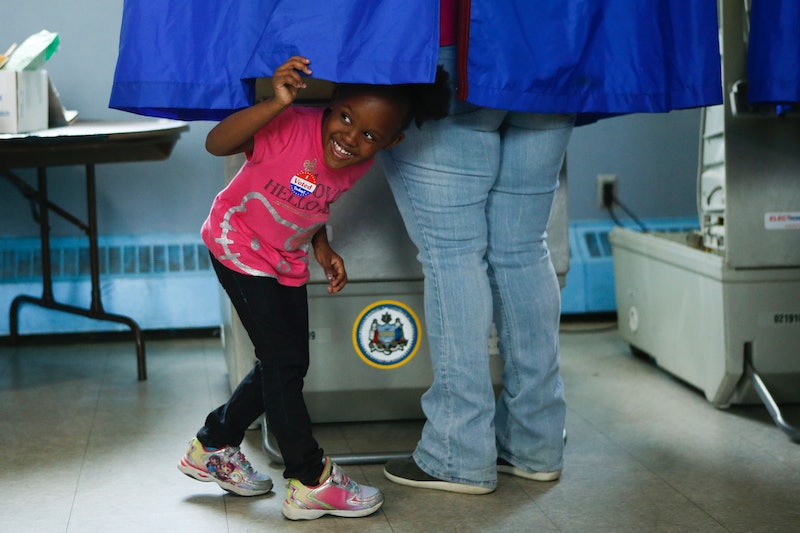 Voter turnout was up slightly on Tuesday in the Acela Primary states, although enthusiasm differed greatly among the parties. The GOP saw big gains everywhere from 2008, but keeping with the general trend this primary season, the Dems saw a relatively poor showing. According to preliminary numbers from the Associated Press for both parties, nearly 5.4 million voters went to the polls in the Acela Primary states, up about 4 percent from the last comparable primary season eight years ago. Despite the poor turnout among Democratic primary voters, there were some bits of data that will make the Clinton campaign very happy.

Of the five states that voted, Connecticut, Delaware, Maryland, and Pennsylvania all saw an increase ranging from 3 to 11 percent. Rhode Island was the only state where voter turnout decreased — and it decreased quite a bit — by nearly 15 percent from 2008. Some caveats, though. One, these numbers could change somewhat as votes continue to be counted. And two, true comparisons can't be made with 2008. These states didn't vote on the same day. Most of these pushed up their primaries as early as February that year in attempt to have a greater say in the race. This year the parties' rules have made that harder to do. Thus, these numbers look at Tuesday's states in both elections.

Only Pennsylvania voted around the same time in April in 2008 when Barack Obama and Hillary Clinton were still duking it out in the fight for the Democratic nomination; John McCain had already secured the Republican nomination in early March. This year in the state, the GOP turnout was way, way up, about a 95 percent increase from 2008 — the fact that the race is still competitive could have something to do with that, but it's likely more general enthusiasm for Trump too.

Across the board the GOP saw turnout increase about 73 percent over 2008 — way bigger increases than we've seen on other days of voting. Overall the GOP has seen turnout rise about 60 percent this primary season, so perhaps Trump mania explains the even higher margins in these states. Trump swept all five of them, taking home more than 50 percent of the vote, not just pluralities like we had seen before New York.

The decrease among the Dems for the day as a whole mirrors what we have seen nationwide. Turnout decreased about 20 percent Tuesday, one percentage point higher than the average so far of 19 percent. Interestingly, Democratic turnout dropped the most in Pennsylvania and Rhode Island. In Pennsylvania alone, 650,000 fewer Dems came out to vote. In Rhode Island the turnout dropped 35 percent. Those are also the states that had the biggest increase in Republican turnout. In Pennsylvania, as I said, the GOP turnout was up 95 percent. In Rhode Island, more than 126 percent.

It's not all bad news for the Dems though — particularly Hillary Clinton supporters. More than 690,000 more people turned out for the Democratic contests than the Republicans' for one. And two, Hillary Clinton took home the most votes of the evening with more than 1.7 million. She beat Trump's take by nearly 400,000 votes. Even in Pennsylvania and Rhode Island, more Democrats turned out than Republicans, keeping the outlook good come November for whoever the Democratic nominee is.

One other interesting piece of data is the level of support that Clinton saw in Maryland and Delaware. These states have the highest percentage of black voters of the five states that voted Tuesday — and Maryland is one of the six states in the country where more than one fourth of the population is African-American. Clinton not only handily won the two states, but she took home more votes than President Obama did in 2008.

The margin is small. She only won just over 4,000 more votes in Delaware, and in Maryland the difference was less than 1,000. But still, this is significant, especially when voting was down slightly in both states, about a 3 percent decrease from 2008. She took home more votes than Obama when less people turned out to vote. Given that these states' diverse demographics mirror the Democratic party's as a whole, enthusiasm for Clinton might not be as low as the pundits have been saying.

The GOP may point to their increasingly engaged electorate as a good sign come November, but don't count out Democratic voters yet. There's more of them after all — and most are voting for Clinton.