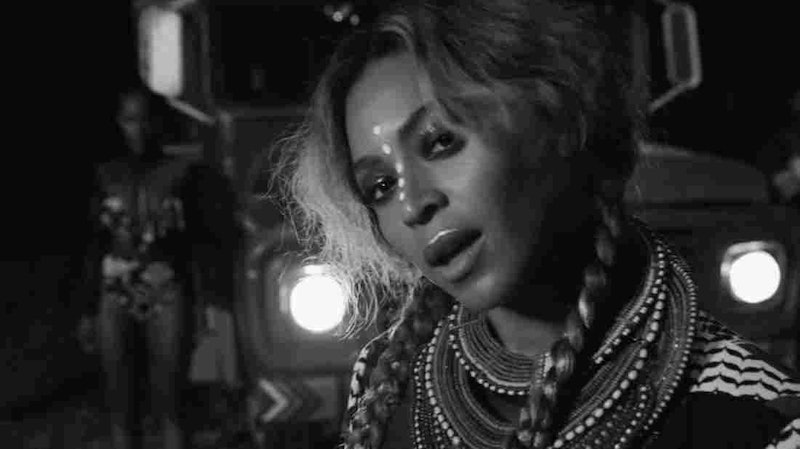 Since I assume we're all united in our general and eternal goal of getting Beyoncé an EGOT, at which time the world will be restored and happiness will return to our kingdom, please put your hands together for the best news I've heard all day — Lemonade will be submitted for a 2016 Emmy. And, since this is Beyoncé we're talking about, this also means that Lemonade is going to win a 2016 Emmy. Our girl will be halfway to her goal, with only the very-attainable Oscar and Tony shimmering in the distance.

The deal here is, since Lemonade was a visual album, and premiered via HBO on Apr. 23, it is eligible for an Emmy. Even though it was only available on HBOGo for 27 hours before moving over to Tidal and iTunes for purchase, apparently it still counts, and HBO has confirmed its intention to submit the visual masterpiece for Emmy consideration in the category of Variety Special. Those are two words that explain Beyoncé's deal perfectly, so I don't know how she could walk out of there without an armful of trophies.

I'll be honest, though, when I first heard this fabulous news, I wasn't as bowled-over by it as I should've been, because my brain automatically translated "Emmy" to "Grammy," and Beyoncé already has so many of those that I assume she melts them down and uses them as paving stones in her garden. Anyway, I was pretty nonplussed by the idea that Lemonade would be submitted for an Emmy, until my coffee kicked in, and I realized oh yeah that is a television award. Not traditionally a music award, unless of course you're Beyoncé, in which case we will literally rearrange the way we give out our most prestigious honors, and be delighted to do it.

That's Queen Bey winding up to sweep the ceremony, by the way. In case that was unclear. How could she not win? Not only is Lemonade a sumptuous visual feast of color, texture, and beauty (refuse to apologize for my artspeak here, she deserves it), but it's also deeply personal and follows a very clear emotional arc. Each video within the larger project has its own tone and vibe, and it really does tell a story just like a traditional television show would. She starts out suspicious that she is being cheated, then has these suspicions confirmed, and then things spiral into anger and revenge and devastation and disappointment and hurt, before being wrapped up by the end with a spirit of forgiveness and renewal. How is that any different than a full season of your favorite show?

I think we should all acknowledge that Beyoncé has done it again — and by "it", I mean completely changed the game — and give her all the Emmys as a reward. I'll be tuning in for the ceremony on Sep. 18 to make sure it's done — you know what to do, Jimmy Kimmel. If it doesn't say her name on that card, you're gonna be the subject of her next visual album Limeade, and I don't think anybody wants that.