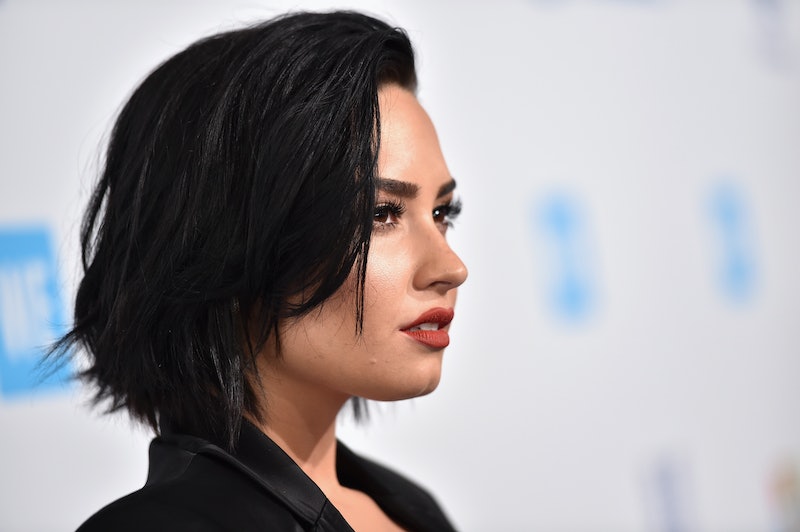 Never shying away from discussing her relationship with body image, Demi Lovato is a celebrity whose honesty about mental health deserves admiration. This is why Demi Lovato's self love Snapchat story feels much more inspirational than the average celebrity's attempted perpetuation of body positivity. While the star embraces herself — quite literally, as she holds her minimal body fat in her hand for a short video for her account — she undoubtedly preached self love. Her caption read, "My body isn't perfect, I'm not my fittest but this is me!! And I [love] it!"

Another image of Lovato can be seen in which she's lying on a sun lounger. It's a close-up of her stomach and thighs, and is captioned "curves." The image felt like a notable addition to the many stories making headlines of this star's newfound adoration of her body. Sure, it would be easy to be cynical about a conventionally attractive, thin celebrity discussing self love in such a way, but Lovato's actions feel a little different to that of most celebs with similar figures to her own.

Considering the singer has been open about struggling with and overcoming an eating disorder (she spent some time in rehab for anorexia and bulimia between 2011 and 2012, and considered re-entering herself in 2013), Lovato arguably deserves congratulations and celebrations because of her simple Snapchat story. After all, this is the same woman who, not long ago, told Fitness Magazine that she once wore a heavy red leather jacket to hide her arms on tour for a whole summer, while only weighing 105 pounds. Seeing her not only rock a two-piece swimsuit, but embrace the fat (regardless of the amount of fat) on her frame is an important milestone in the star's recovery.

By documenting her journey so openly — including the highs and the lows — Lovato has shown us how to responsibly act as role models in the public eye. I, for one, am proud of her self love Snapchat story, because it represents the power of positive body image.

Not only do body positive practices help change societal perceptions of beauty, but they actively help women suffering with mental health issues as well, including celebrities, and including fans of Lovato who may have experienced similar struggles.

This isn't the first time that Lovato has used images of herself to spread a positive message, though. From previous self love selfies, to posting makeup-free pictures on an almost weekly basis, promoting the #nomakeupmonday hashtag, and refusing retouching and makeup on her first nude photoshoot for Vanity Fair , Lovato has been a self love role model for years.

It'd be all too easy to dismiss this woman's personal brand of body positivity, because she is a thin, traditionally pretty, and wealthy celebrity. But doing so would feel, at least to me, like a disservice to Lovato's back story.

I have nothing but admiration for the former Disney star. It takes courage to speak out about struggling with body image in the ways Lovato has done. The least we can do is encourage and celebrate her self love in return. After all, you never know the amount of fans that are going to be helped by seeing Lovato cup her belly so affectionately.