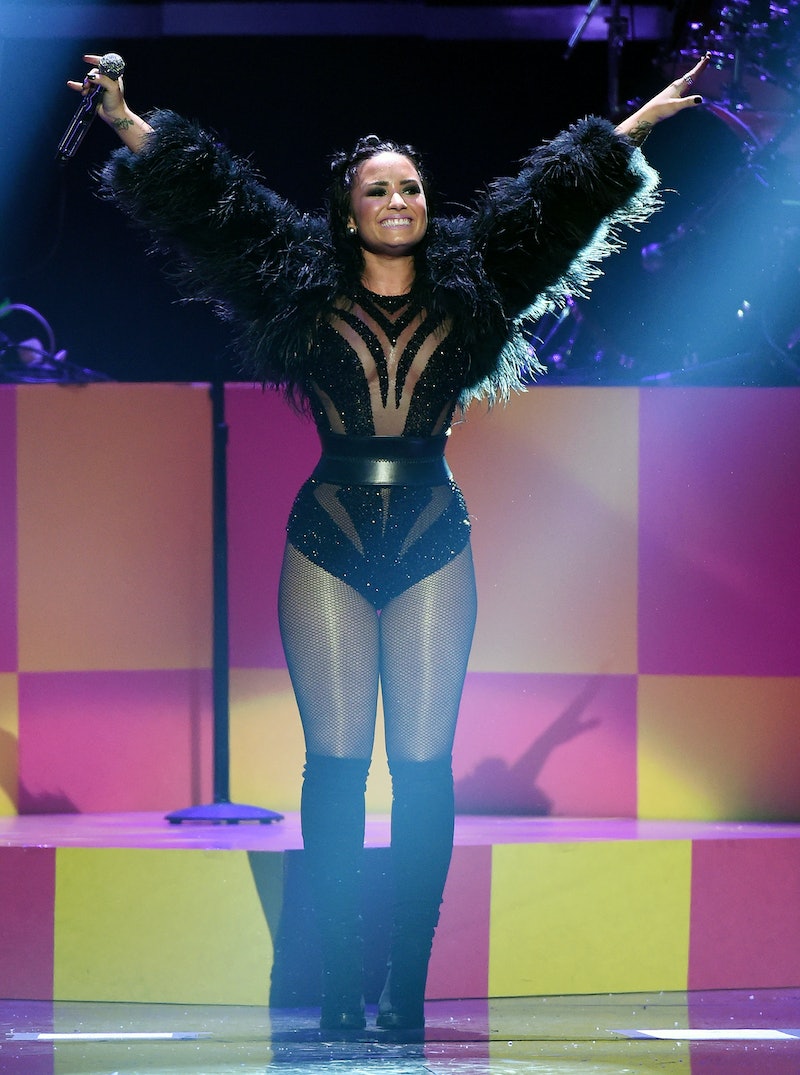 The world (and the Internet) was widely upturned on Oct. 2 by Demi Lovato's nude photo shoot for Vanity Fair, but not for the reasons you might think. Instead of being excited about the mere possibility of seeing a celebrity bare it all, people seem to be gravitating towards Lovato's self-loving reasons behind doing the shoot. Her reasons aren't just important to consider under the umbrella of celebrity culture, but for their ability to resonate with any self conscious human aiming to feel a little more body positive.

According to Vanity Fair, Lovato's three rules before even beginning the shoot are ones that very few of us (celebs and non-celebs alike) would be willing to adhere to: "No makeup, no clothes, and no retouching." In a world where people even Photoshop selfies for Instagram, this bold move is a total step away from the contouring and retouching culture that reigns high over the fashion and beauty world of the moment.

Outside of Lovato's self-issued rules, her nude shoot is packed full of other body positivity. The 23-year-old singer and actress has constantly made an effort to preach self love, after all, and her Vanity Fair shoot is just an extension of the body positive lifestyle she already champions not just for herself, but for her fans too. By taking part in this shoot and applying these rules to it, Lovato has refused the comfort of Photoshop and given everyone a massive lesson on loving the skin they're in. Here are just nine reasons her move was body posi.

1. "No Makeup, No Clothes, No Retouching"

Although there are many ways that Demi Lovato's new nude photoshoot is body positive, it's important not to overlook the very foundation of the shoot itself. Considering Lovato is a member of celebrity culture and that celebrity culture often goes hand in hand with Photoshop, the rules she instated were hardly a "must" in order to be successful the industry. However, she seemingly chose them in order to embody the message she preaches. Her nude shoot shows the world how she really looks. It's a call for us to embrace our natural beauty, in 100 percent raw form.

2. This Is Her First Nude Photoshoot

Being able to be nude and comfortable with yourself is one thing, but being able to do it for millions to see is another entirely. Although some celebrities seem to release a nude photoshoot every week (hey, I'm not complaining), doing your first one must be truly nerve wracking. Props to Demi Lovato for agreeing to a nude shoot in the first place and allowing herself to be vulnerable and honest for the world to see.

3. The Realness Of It All

4. The Public Shunning Of Photoshop Culture

Vanity Fair has notably rejected overusing Photoshop before, so this bold move by the publication as well as by Demi Lovato is a further open statement against the retouching tool so heavily used throughout the industry. Photoshop is regularly utilized to the point where celebrities don't even look like themselves anymore. By casting it aside, Lovato and Vanity Fair remind us that Photoshop isn't needed to make a natural body look beautiful.

5. The Bravery Of Her Decision

Considering this was Demi Lovato's first nude photoshoot, she could've easily chosen to utilize makeup and Photoshop and still have garnered a lot of attention. Instead, Lovato bravely turned her first photoshoot into a political statement, championing loving yourself for how you are naturally.

6. Alignment With Her Own Brand Of Body Positivity

Demi Lovato has been preaching body positivity for a long time and she'll undoubtedly continue to do so long after this photoshoot's spot in the headlines. Whilst this shoot is an important step forward for the body pos movement, it's totally in keeping with Lovato's views on self love. The shoot can be viewed as an extension of the messaging Lovato so often gives off, so it definitely doesn't feel about publicity.

7. The Admittance Of Her Insecurities

In Vanity Fair's interview with Lovato, she is stunningly open about her reasons for doing the shoot in the first place, including wanting to find a means of feeling comfortable and empowered in her own skin. By admitting to her insecurities, she's hoping that she can inspire others to love themselves for who they are and how they look, too. Lovato wants people to learn that, "You can overcome the obstacles of body image issues."

8. Her Destigmatization Of Nudity

Even on their own, these pictures are incredibly powerful and moving. The simple bathroom shots are shockingly intimate and personal. Demi Lovato isn't being over-sexualized or portrayed as superhuman, though. She simply looks like she's just been caught naked in the bathroom. She proves that being nude often has very little to do with sex or attractiveness. It can just be about being comfortable in your home and your bod.

Demi Lovato has always been open about her own mental health, including suffering from an eating disorder. Being able to go from hating your body and starving yourself to actively loving your body's natural form enough to bare all is truly heartwarming. Realizing how beautiful you are isn't an act of vanity. It's an act of body positivism, self care, and self love.