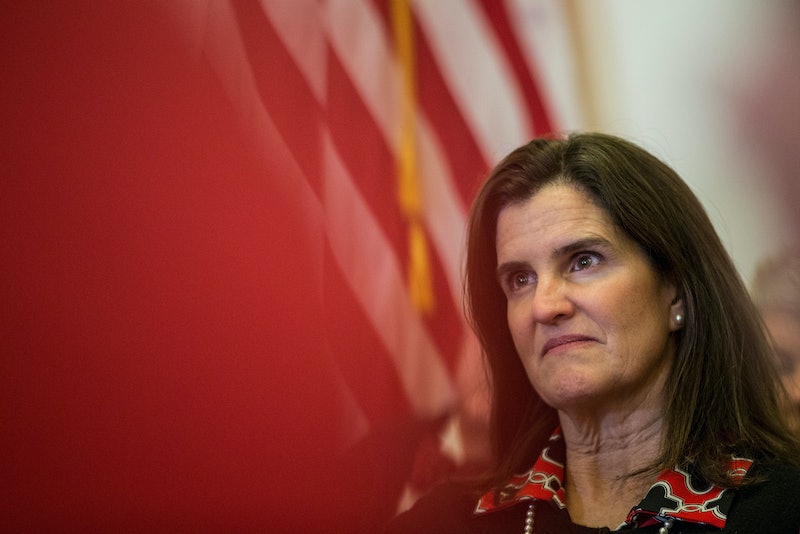 During Donald Trump's Tuesday night victory speech, Mary Pat Christie proved that side eye is louder than any mansplaining ever could be. It is thunderous. Not since 2013, when First Lady / Shade Master Michelle Obama shut down John Boehner with one fatal expression, has the political realm witnessed such deafening side eye. If you missed this last night, you surely woke up to it all over the Interwebz this morning.

Reality TV star and "presumptive" Republican presidential nominee Donald Trump was doing his thing, explaining to people what women do and do not like. In case you've managed to totally avoid his diatribes this election (good for you, btw, and please tell me how you do it), he likes to do this. A lot. However, his attention was abruptly and irrevocably stolen by one Mary Pat Christie, who had the dubious good fortune to be standing just to Trump’s left and firmly in the cameras’ sight lines.

At first glance, Christie was existing blandly and amicably enough, as wives of politicians are so often expected to do. Then, Trump started in on Hillary Clinton and how she would be a far less successful candidate if she were a man. Because Democrats would never turn out for a male Clinton running for office, amirite guys? Christie was doing an admirable job of quashing any sign of personality or opinion until Trump got to about here:

“Frankly, if Hillary Clinton were a man, I don’t think she’d get five percent of the vote. The only thing she’s got going is the woman’s card, and the beautiful thing is, women don’t like her. Okay?”

It was then that Mary Pat Christie’s body apparently betrayed her.

And the incredible thing is that after that, the night was pretty much over for Trump. He did extraordinarily well in the April 26 primaries. He won every single one of the five states up for grabs. But within a few hours, no one cared — or at least, no one cared nearly as much as they did about a telling facial slip so brief that it doesn’t even fill out an entire Vine. Such is the power of a woman’s face, captured in an unguarded moment of honesty, to better encapsulate the sentiments of a nation than any Trump speech ever could.

Separately, wherever Clinton got this "Woman’s Card" — which is, apparently, why she's beating Trump by nearly double digits — I would like one also. I imagine one swipes this Woman’s Card to open such doors as Being Taken Seriously By Default and a salary increase that closes the wage gap. Frankly, all of us ladies should sign up for one.