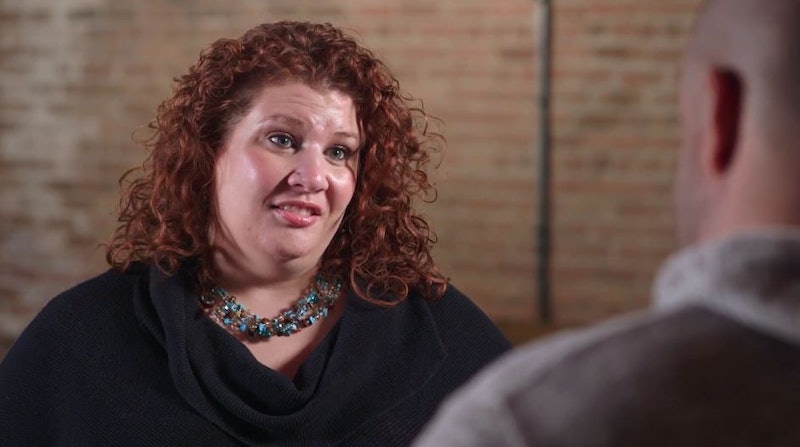 Anyone who's remotely well known — or anyone who's just on Twitter, period — has probably had someone write a mean tweet about them at some point. But as is evident in a new video featuring sports writers Julie DiCaro and Sarah Spain, some messages are #MoreThanMean. Because there are messages like "ur dumb," and then there are messages telling you that you should be "hit in the head with a hockey puck and killed."

Julie DiCaro and Sarah Spain are both Chicago-based sports writers, and both have been vocal about instances of violence against women in the sports world. Last year, for instance, Spain criticized the Chicago Bears' decision to sign accused domestic abuser Ray McDonald, and DiCaro reported extensively about the rape allegations against Chicago Blackhawks star Patrick Kane. (No charges were filed against McDonald after an incident in 2014, although he was charged in a separate incident in 2015 for domestic violence, felony false imprisonment, child endangerment, and violating a court order. Charges were dropped against Kane in November 2015 due to insufficient evidence; said Kane in a statement, "I have repeatedly said that I did nothing wrong. I have respected the legal process and I am glad that this matter has now been closed and I will have nothing further to say going forward.")

Both women have received immense backlash for, essentially, doing their jobs and having an opinion.

On some level, it's true that negative feedback is just part of living with the Internet. Often, mean online comments are just annoying — after all, what a stranger thinks of you is not that important. Mean tweets are even good comedic fodder on Jimmy Kimmel. But nasty online comments can easily cross a line between irritating and horrible, between humorous and deathly serious. It's why cyberbullying is the huge problem that it is, and teens aren't the only ones affected by online messages that are way over the line. Indeed, women in particular are frequently subjected to this type of behavior. Whether you're a sports star, a news reporter, or just someone who believes in women's equality, people can be vicious to women online — and at some point, comments cross over from mean to abusive.

In the video, DiCaro and Spain sit down with normal guys who have been asked to read some of the "mean" messages the women have received, from various social media platforms. Both women have seen the messages before; the guys have not. And the fact that these guys are intensely uncomfortable saying such hurtful things really goes to show that it should just be common sense that these types of messages are not OK. As does the fact that, even having seen the messages before, it's still hard for DiCaro and Spain to hear some of them.

Since the video was released by Just Not Sports on Tuesday, numerous people have expressed support for DiCaro and Spain.

Though as DiCaro and Spain have said, some people have been... not supportive. You'd think that, after hearing about how much abuse someone receives online, the instinctive response would be to not send online abuse, but you'd apparently be wrong. I truly don't understand people sometimes.

Online abuse and harassment are real, and rape and death threats are not just "mean tweets." The women and men who receive this kind of hate online shouldn't have to deal with it, and the fact that there are so few options to protect yourself is terrible. Hopefully videos like this one will make clear that stronger safety features are needed to protect users from this level of harassment — and hopefully it will remind us all that the things that happen on the Internet are real. Every person on the Internet is a real person, reading what you write to them.

Watch the video again if you need reminding.

More like this
How To Fight For Reproductive Rights, Based On How Much Time You Have
By Courtney Young
Sandra Bullock, Girlboss Extraordinaire
By Matt Harkins & Viviana Olen
Why Can’t I Go Live On Instagram?
By Emma Carey
How To Add Music To An Instagram Post
By Emma Carey
Get Even More From Bustle — Sign Up For The Newsletter