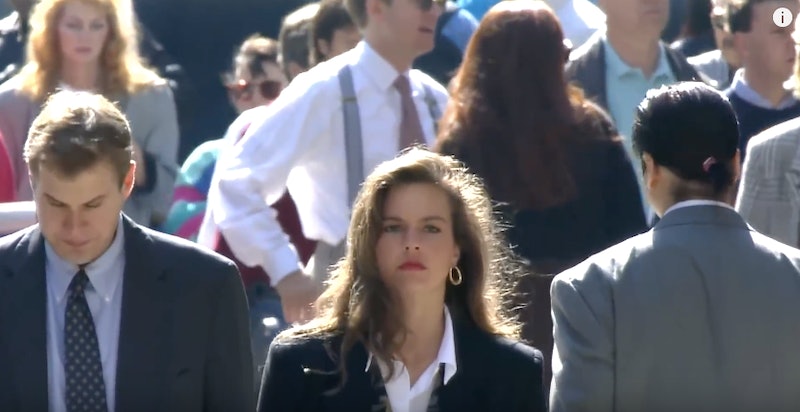 I've just fallen into a deep disorienting web wormhole watching HD footage of New York in 1993 set to the soundtrack of some Seinfeld-esque theme song, and now I'm confused and and don't know what year it is or where I am. In this rare time capsule, a video made as an VHS-HD demo for the Japanese market, the New York City of 1993 is captured in such clarity and such high definition that it looks like it was shot just yesterday. Yet, this is not the New York I live in, not by a long shot.

When we look at the '90s on film we're used to a fuzziness, a color balance that's off, and a weak saturation. It's almost hard to even remember the '90s mentally without putting that crappy VHS filter over my memories. Which is exactly why this video is such a big deal. It's the first time we've gotten a chance to see the real, unscripted New York City of the '90s with enough sharpness that we can imagine ourselves living in that world.

The video is a total trip. The fashion is boxy and bizarre and terribly '90s, the buildings too appear boxier and less sleek. There's more spray paint, more garbage on the street — meaning, this video was definitely trying to capture that iconic "grit" of the city. However, the second portion of the video, which is filmed from a helicopter, shows a very different New York. With a nice smooth jazz tune accompanying the ariel footage, New York looks like the dreamy place we got to know in the movies where Meg Ryan and Billy Crystal are just around the corner, bickering over pastrami. In this far away footage we see a serene city, people aren't in a rush and everyone seems to have the faint trace of a pleasant smile on their face. Here are some highlights:

This flannel top and short cut is so '90s rock chick. And yet, this picture could be from yesterday because Lord knows we all wear these shirts now. There's no evidence whatsoever that this picture was taken over 20 years ago!

The hair situation is out of control. These days were more about smoothing or curling or frying our hair. This fluff-ball blow out is definitely a sign of the times. Look at that height, on both of them!

So long, Joe Camel, you're no longer welcome here. Since the '90s we've banned major smoking campaigns like this massive Camel light-up billboard. It looks more like it's advertising a theme park than a cancer stick.

It's always startling and eerie to see footage of the Twin Towers. In this light, they glow in a strange heavenly way. It never gets any less weird to see them.

Sure, we still have graffiti here, but the mix between the bright colors of the cigarette advertisement and the wall mural make this street look dated. It's rare to find collaborative graffiti in the city anymore. Most of it is commissioned advertisements now.

"From far away, it's OK." From above, the city looks clean and serene. The stunning architecture and the lush green of Central Park are an admirable juxtaposition. This is the NYC we see in the movies.

It's weird to think about what the next generation will think about our technology and our New York. Will they be watching footage of the 2000's through their virtual reality 3D glasses, laughing at our hair?

More like this
Remember These Ancient Pieces Of '90s Tech?
By Lucia Peters and Emma Carey
11 Trends From The ‘90s That Made You Feel So Cool
By Julie Sprankles
Starbucks’ Chocolate Cream Cold Brew Tastes Like This Retro Candy
By Emma Garza
Meet The Disney Imagineer Bringing 'Guardians Of The Galaxy' To Epcot
By Charlie Mock
Get Even More From Bustle — Sign Up For The Newsletter