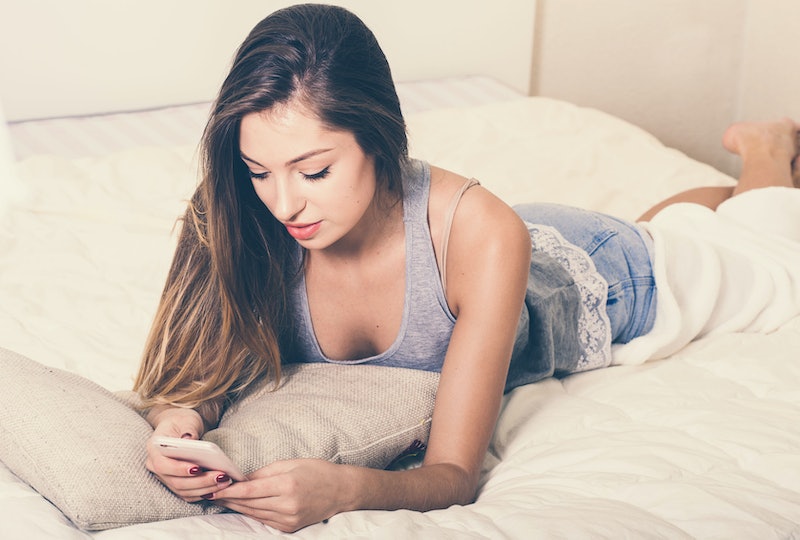 No matter how you slice it, sexting your partner, crush, ex, or latest Tinder match is a thing that's here to stay. There are those who indulge in some pretty raunchy and explicit sexts (I won't even get into the one I recently got from an ex-boyfriend recently, but I will admit I was shocked and even blushed), then there are those who tease and leave something to the imagination. They’re just as sexy, but in a completely different way.

The first time the word “sext” was used was in 2004, in regards to an alleged “sext messaging” scandal between David Beckham and an assistant. As to what those alleged sexts had to say, we don't know, but they were considered explicit at the time. However, since it was 2004 and handy internal cameras on smartphones weren't on the scene just yet, it’s safe to say that “sext messaging” was probably nothing compared to what we see today. In other words, no one was sending out Anthony Weiner-style dick pics.

If you’ve been thinking that sexting will make a great addition to your relationship — and a lot of people feel it does — then it’s best to start off slow, as opposed to sending your partner a nude picture. Here are 13 tame ways to sext — so tame, in fact, that you won’t be using the word “cock,” “p*ssy,” or even mentioning anything about “coming.” But first, check out our video on sex positions for small penises:

Although this might not necessarily fall into the “sext” category, if you send it midday, out of nowhere, it can definitely make your partner sit up and take notice.

While some sexts go straight to the oral end of things, if you want to keep things tame, yet seductive, mention erogenous zones. In this case, we’re going with the neck and the lips.

Even if you’re at work and wearing a business suit, this is the perfect moment to either pretend otherwise or to text your partner about what you’re wearing underneath that business suit.

4. “I Wish We Stayed In Bed Together All Day Today Doing… Stuff.”

5. “We Should Do Something Different Tonight. But I Get To Decide.”

There’s nothing hotter than when your partner tells you that they want to spice things up and they get to decide what that spice will entail. It gets you all excited and hot and bothered for what’s to come!

While a less tame sext would probably read, “I want you inside me so bad right now,” if we stick to the tame theme, you’re basically saying the same thing. You’re also suggesting that you want your partner in more than one way.

7. “I’m Not Wearing Anything Right Now.”

This one is great to send when you’ve just gotten out of the shower or are about to get into it, because you can follow up by mentioning the shower. The thought of your partner naked and wet does some crazy things to the brain.

Ooh! What a tease! And not just that, but you’re playing coy, too. Deliciously hot.

9. “I’m Getting Home Before You Tonight Because I Have A Surprise For You.”

10. “I Feel Flushed And Excited Whenever I See You.”

According to scientific research, the reason men and women are drawn to those in red, is because “sexual excitement is often associated with redness in the body’s erogenous areas, and with facial blushing.” So basically any attention you can bring to the fact that you're flushed or blushing is good, because it puts sex on your partner’s brain.

11. Send A Photo That Leaves Something To The Imagination

If we weren’t aiming for tame, then I’d say go ahead and send some crotch shots, but since we are, a great photo to send would be one that doesn’t reveal too much — like maybe your shoulder with your bra strap slipping off or your hips, but with your underwear on. These type of photos can end up being the hottest types of photos you can send.

Of course if your partner responds by asking for details, you can either sext back a couple of playful ideas or simply respond with, “Oh, you know…" Again, we're using the "more to the imagination" technique.