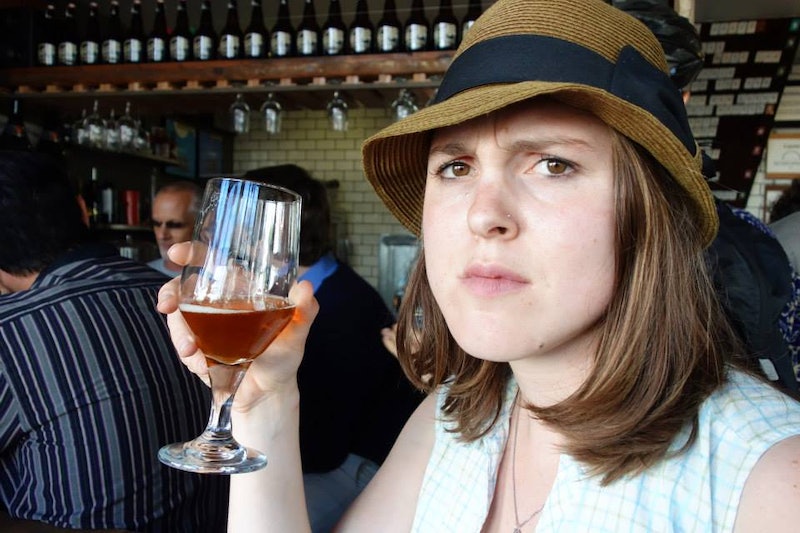 Looking back over my long, checkered, and very colorful dating history, one thing stands out above all others: I used to tolerate a lot of nonsense from the men I dated. (And to any of my exes reading this: Yeah, #NotAllMen and not all exes, but, you know, you might want to take a look in the mirror…) From dudes who refused to admit that they were my boyfriends to the guy who left me stranded in Brooklyn at one in the morning to that one guy in college who was straight-up abusive, I look back and want to hug past me and say, “Girl, he is not worth it.” (Although let’s be real: Past me would probably not listen.)

But the mistakes that we make when we’re dating are lessons that help us grow. I know, I know: It sounds like something you’d see on a cheesy inspirational Instagram, but I firmly believe in dating a lot and messing up a lot and making mistakes when you’re young because otherwise how can you possibly figure out what you want? And, perhaps more importantly, what you don’t want.

From my very first boyfriend at age 12 (we played chess and held hands sometimes) to meeting my partner three years ago, I spent 13 years trying out different relationship models and learning exactly what was (and what wasn’t) going to fly for me. While I wouldn’t ever want to relive the crap that some of my exes put me through, I’m glad I lived it then. That history of ups and downs and more than one really bad relationship led me to a man who I’m still amazed to be with, every day; a man who I hope to spend a long time with; and a man who would never do any of these 11 things. But first, check out the latest episode of Bustle's Sex and Relationships podcast "I Want It That Way":

Whether it’s saying I looked ugly in a certain outfit or telling me I was a “worthless slut” for wanting sex while we were both naked in his bed, there are plenty of insults from men who were supposed to at least like me if not love me in my past. This is number one on the list for a reason: I’m too good for that nonsense.

One time, I made plans to come over to the house of the guy I was seeing, only to have him not answer the phone or my knocks at the door. It was very late at night, I’d spent $20 on a taxi, it was winter, and I had no way of getting into his apartment. Eventually his roommate heard my pounding and let me in to angrily wake up my Sleeping Beauty.

That was a particularly dramatic “flaking on plans” moment, but I don’t stand for men who think it’s OK to make a commitment and then not show or cancel last-minute. If you say you’re going to be there; be there. Otherwise, please let me show you to the door.

3. Talking Smack About My Family

My family is my heart. I have five brothers and one sister, and while I’ve been known to throw shade their way in my day, no one else has the right to say bad things about any of them. Now, I’m not saying that my partner has to pretend like he loves all of my big, loud, crazy family all of the time — that would be asking a lot. But directly insulting them? Trying to undermine my love for them? That’s what my abusive boyfriend in college did and I know now that it’s never OK.

If it looks like a boyfriend, walks like a boyfriend, f--ks like a boyfriend? I’m gonna call it a boyfriend. No more in between, wishy-washy relationships for me, thanks. Like, obviously there’s a period in the beginning of every relationship where you’re getting to know each other and trying to decide if you want to make a more serious commitment, but I know now how long of a period is acceptable to me. (Looking at you, dude who wouldn’t admit he was my boyfriend after six months of spending at least three nights a week together…)

5. Thinking Beauty Is Worth It

I was not the first person to put up with way too much s--t from someone because they were incredibly gorgeous and I will not be the last. We tend to think poor treatment is the price we have to pay for serious beauty and that leads to a whooooole lot of nonsense. Never again, my friends! There are plenty of other pretty faces and bodies out there for you ogle over. Don’t let the permission to touch some be an excuse for poor behavior and disrespect.

6. Not Respecting My Sexual Boundaries

I’ve always been pretty good about asserting myself sexually, but there was definitely a partner or two who didn’t respect my boundaries, even after I’d verbally made it really clear what was and wasn’t OK. Any guy who tried to pull a move like that today would be immediately thrown to the curb, before he could get his clothing back on. No second chances.

8. Putting Down Other Women

Unfortunately, I have to admit that I used to do this too, before I realized that putting down other women does not build me up. If he’s showing that kind of disrespect to other women, it means that he disrespects women in general so I’ve made a rule: Guys who think that talking smack about other women is a compliment to the woman they’re with don’t deserve to have sex with women.

This is not only extremely exhausting but is also a classic sign of an abusive relationship. I had a boyfriend who would provoke me into these massive fights, and then show up later with a dozen roses or the expensive cigarettes I couldn’t afford on my own and puppy dog eyes that made me melt. That cycle continued for nine months until he threw a table across the room during one of our fights. That moment made me realize that the emotional abuse he’d been heaping on me for the better part of a year could easily escalate into physical abuse, and I left him that morning.

When he came crawling back with roses, I told him it was over.

10. Not Introducing Me To His Friends

I am fabulous and deserve to be shown off. Someone who won’t introduce you to his friends is hiding something. The end.

Couples fight; that’s part of being in a healthy relationship. However, holding a grudge does nothing apart from making old wounds fester and turn to poison. An emotionally aware person gets the issues out in the open, forgives, and moves on. Grudges? I just don’t have time for that anymore.