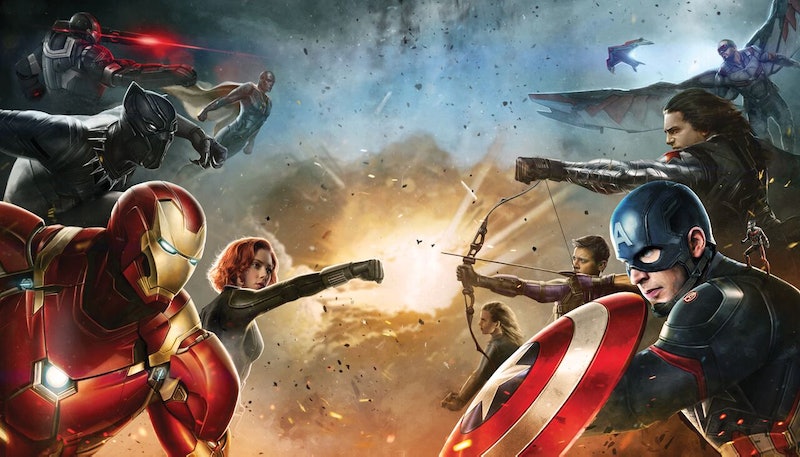 It might seem like a silly observation, but it's worth noting that the upcoming Captain America: Civil War is, well, a Captain America movie. Though most of the Avengers squad shows up in this film, the movie actually belongs to Cap, and not the entire group. Still, it's easy to see why people might think that Civil War is an Avengers movie. It's now a common practice in comic book movies to bring in an entire lineup of day-savers, although sometimes, like in the case of Civil War, it's simply to pit them around one hero's story. Often, this plot device is a way of expanding the supporting cast's story lines without devoting an entire film to them, and while Civil War is not an Avengers movie, it does fit seamlessly into that universe.

In many senses, you might call Civil War a "spiritual sequel" to Avengers: Age of Ultron. This phrase seems to have found enormous popularity among filmmakers over the past few years, with Richard Linklater revisiting Dazed and Confused with Everybody Wants Some! and J.J. Abrams adding 10 Cloverfield Lane to his ongoing saga. Both directors have called these new movies "spiritual sequels," but the term's definition still seems pretty loose to me. In comic book movies, there's so much mythology involved and so many different intersections between superheroes, that often it seems like the only way to expand plot lines is to produce new stories that are alike in tone and style, while reuniting familiar casts. Civil War seems to fit that criteria, so I'd argue that it is, in fact, a spiritual sequel to The Avengers films.

If you're not caught up with which events led up to Civil War , there are several different stories from Marvel movies that will culminate with this film. The tl;dr version: New York is in shambles, the Avengers are all like, "What now?," the government passes a bill that will keep heroes in check and stop them from destroying everything with their superpowers, and an old BFF of Captain America's shows up as villain and basically causes the patriotic paragon to split. Boom! That's Civil War, in a nutshell.

So while the film certainly relies on previous knowledge of The Avengers, it's Captain America who's the main squeeze of this story. In this respect, Civil War might be a sequel to the other Cap movies, and, yes, a spiritual successor to the Avengers films, but it's not an Avengers movie. Nevertheless, I am super excited to see where it all goes.