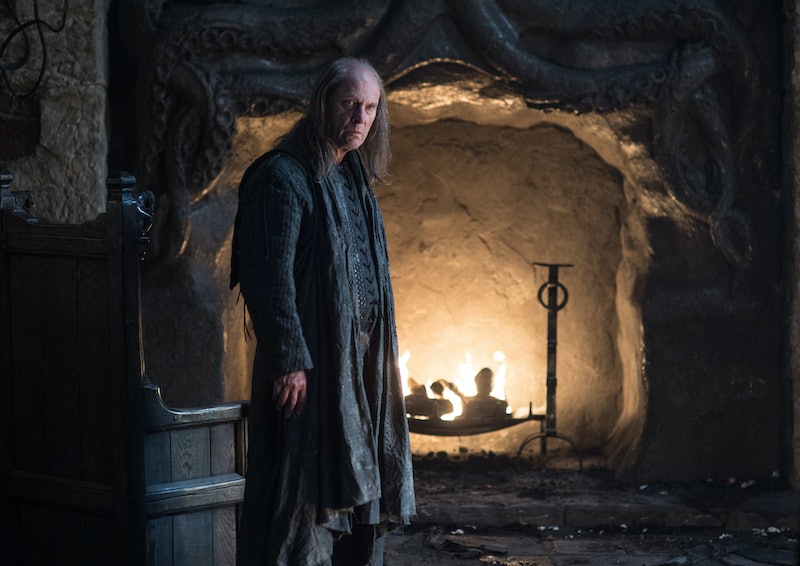 I personally have yet to see their general appeal, but I know there are a lot of House Greyjoy fans out there. To them I say, good news — Balon Greyjoy is returning to Game of Thrones this Sunday. The "King of the Iron Islands" has stayed out of the fight for a while, and could really shake things up. There are spoilers from the Game of Thrones novels ahead, so drop your anchor if you don't want to know what may be coming next.

The press release for Sunday's episode reveals that "Ramsay Bolton proposes a plan, and Balon Greyjoy entertains other proposals." Now, these descriptions are the verbal equivalent of AMC's now-infamous Mad Men promos, but since Ramsay and Balon don't typically share scenes, it is interesting that these two shared a sentence. After the battle at Winterfell, the Northern armies are going to need reorganizing. I'm sure someone will be campaigning for Greyjoy support. On the other hand, could this mean that the Greyjoys are going to attack the Boltons?

We haven't seen Balon since Season 3, when he basically gave up on his son, but we have briefly seen Theon's sister Yara in Season 4. She attempted to rescue her brother but, after meeting Reek and being forced to retreat, she declared Theon dead. The Bolton army has just triumphed over Stannis Baratheon's troops, so I wonder what has caused both of them to have a change of heart? Word doesn't travel extraordinarily fast in Westeros — do they know that Theon has escaped?

If you recall, the Greyjoy's have broken away from the Iron Throne, in a sense. While Theon was raised as Ned Stark's ward, he was really more like a war prisoner lost in a rebellion. In George R. R. Martin's A Song Of Ice And Fire series, Balon Greyjoy has already died at this point in the story. His death leaves an open seat on the Iron Islands, which Yara (whose name is Aasha in the books) fights for against her uncles Euron and Victarion. That also means that Melisandre's leech prophecy came true — all three "false kings" are dead. Since an apparent theme of Season 6 is the Red Woman's crisis of faith, I think I now understand why they've delayed this moment from the books. It's a little unfortunate that Balon Greyjoy may be reappearing on Game of Thrones only to perish, but it's still exciting to revist that corner of Westeros.